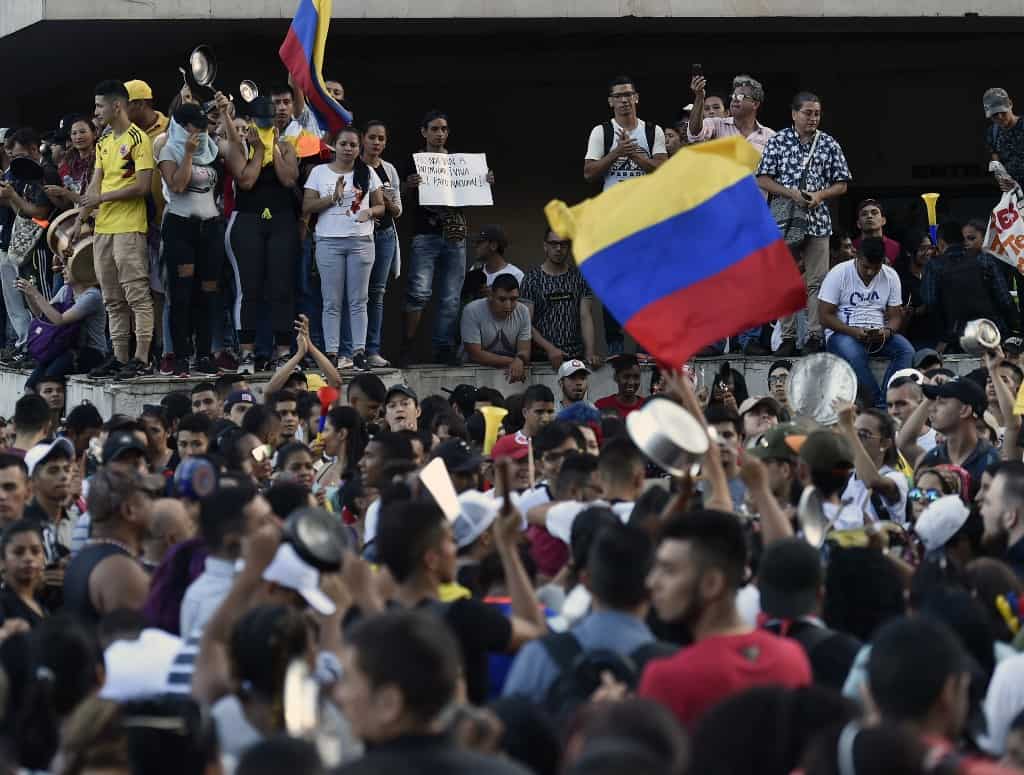 People take part in a 'cacerolazo' (pans banging) a day after a nationwide strike by students, unions and indigenous against the government of Colombia's President Ivan Duque, in Cali, on November 22, 2019. ((Photo by Luis ROBAYO / AFP))

Three people were killed during nationwide demonstrations in Colombia as part of a general strike protesting against the policies of President Ivan Duque’s right-wing government, the defence minister said Friday.

Carlos Holmes Trujillo told reporters that the deaths had taken place during disturbances in the western Valle del Cauca department.

“Over the last few hours, the authorities have confirmed the death of two people during clashes in Buenaventura and of another in Candelaria, municipalities in Valle del Cauca,” the minister said.

Hundreds of thousands of Colombians took to the streets in the capital Bogota and other cities on Thursday to protest Duque’s economic, social and security policies.

There were reports of arrests and clashes as trade unions, students, opposition parties and the South American country’s indigenous organizations took to the streets.

Bogota’s mayor declared a curfew in parts of the Colombian capital on Friday night in response to sporadic looting and clashes.

In a statement late Thursday, Duque announced that he had heard the protesters’ demands, but did not respond to their request for direct dialogue.

“Today, Colombians spoke. We hear them. Social dialogue has been a main principle of this government and we need to deepen it with all sectors of society,” he said.

The protests come amid social upheaval across South America, as a wave of unrest over the past two months has battered governments in Chile, Bolivia and Ecuador.

The popularity of Duque’s right-wing government — a key US ally — has been on the wane since his election 18 months ago, as it deals with hosting 1.4 million refugees from neighboring Venezuela’s economic meltdown as well as the complex fallout of a 2016 peace deal with FARC rebels and rampant drug trafficking.