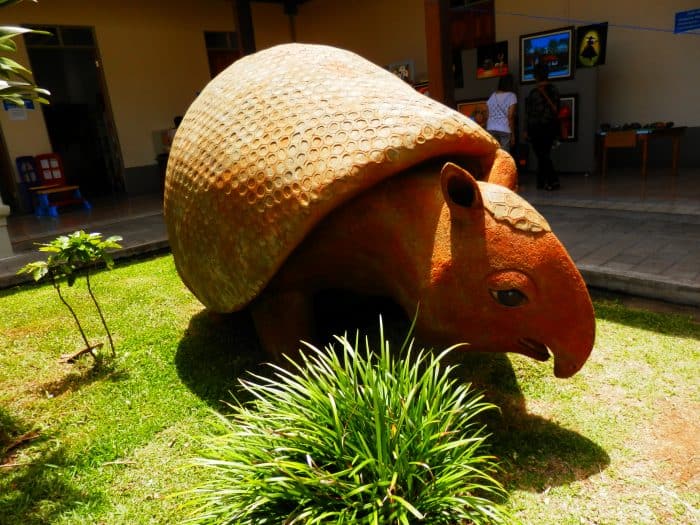 It’s a bird! It’s a plane! It’s… the giant armadillo of San Ramón!

“Heroes 1856” is Costa Rica’s first-ever original rock opera, but this innovation is rooted in the past: It stars a large group of young musicians, singers and dancers who exalt the memory of the men and women who shaped the country’s history.

The Campaign of 1856, as it is known, was a transcendental and important event for all Costa Ricans and involves one of the biggest heroes of our history. At a time when not just the country but all of Central America saw their integrity and independence threatened by U.S. filibuster William Walker and his army of mercenaries, then-President Juan Rafael Mora Porras inspired thousands of Costa Ricans – men and women – to arm themselves and defend the country they loved.

The goal of “Heroes 1856” is to tell that well-known story in a different way, a dynamic approach that reaches youngsters.

“To us it is so important to tell, especially to the young people, the story of Costa Rica in a different way and with fresher language, using a music genre they can understand,” Mario Campos, producer and co-creator of the opera with Jorge Urbina, told The Tico Times. “We have heroes who have stood out throughout history.”

He added that while ‘Juanito’ Mora is a personality renowned throughout Latin America, Costa Rican discussion of  the 1856 National Campaign tends to focus on the iconic Juan Santamaría, who, as the story goes, died while setting fire to the invaders’ garrison. Santamaría was indeed a hero, but the man who planned all the strategy and led Costa Ricans to the victory was Juan Mora, Campos said.

“The challenge is quite interesting, because here we can’t make up things or change the chronology of waht’s happening because it is history. We have to become attached to the history, we can’t make anything up,” said Campos, meaning that the creators of the opera had to work within those limits. They based much of their research on the material of well-known journalist Armando Vargas, who has written extensively about Costa Rican history.

“It’s quite a new experience due to I’m used to perform as the good guy, and it’s not that William Walker was a bad guy. He was moved by his beliefs and his ambitions,” Montalbert explained, although he admitted it was an interesting new experience to play such a reviled figure. He also called the rock-opera approach a “more real way to learn history,” and said that it is gratifying to be a part of the country’s past.

According to Montalbert, the show will use actual speeches made by leaders, as well as less literal interpretations. He said the cast and crew hope to shock their audience and help inspire new interest in Costa Rican history, helping viewers to better understand how the country was developed and thus how its future can be built.

“We’re influenced by different rock genres, maybe more like contemporary rock such as Green Theater. Also bands like Led Zeppelin, Pink Floyd and Rolling Stones. … Actually, we’re really influenced by heavy rock, we’re taking advantadge of the two excellent guitarrists we have,” said the musical director, Carlos Campos. “The most challenging task was to get to the intensity of what the lyrics mean, for example when the president is explaining that Nicaragua was invaded and immediatly he has to ask the nation to arm against the enemy – that is a dramatic moment so the music strenght has to rise. All those contrasts in the lyrics must be expressed, too, with the music intensity,” added Carlos.

“We, in a way, have pushed into the background, into the forgotten, our heroes. What we want is that our people get to know those heroes, because today no one remembers Juanito Mora, among other heroes. … Juanito Mora gave us a sense of a nation,” Mario Campos added.