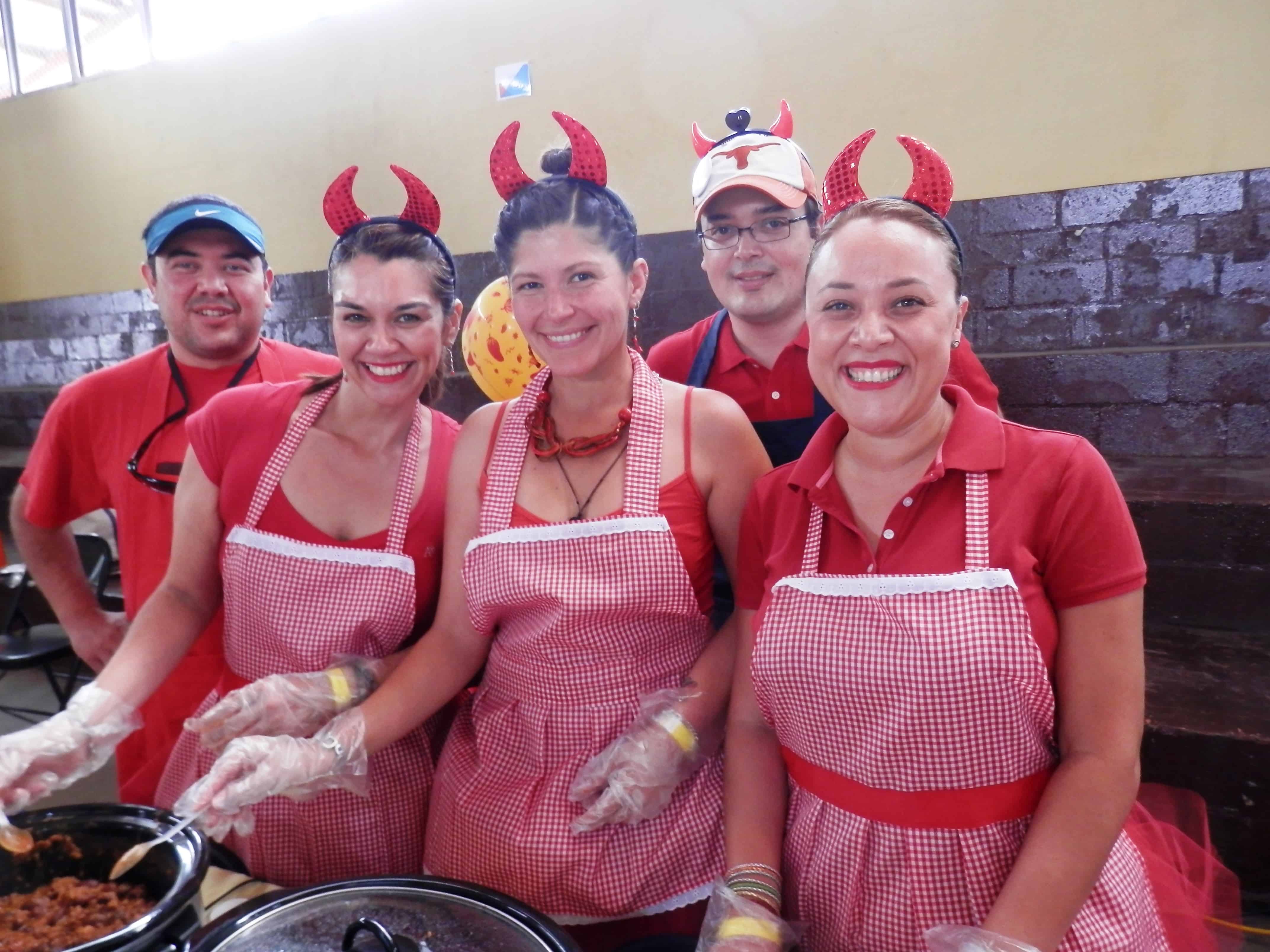 Lots of chili, ranging from mild to flammable, was served up at the eighth annual Chili Festival in Atenas on Sunday. Twenty chili cooks each cooked up three gallons of their unique recipes, adding up to a whopping sixty gallons of chili – and the crowd ate it up.

Sporting names like Texas Tico, Chili Willas, Chili Fuego, and Bo Bo’s BBQ, cooks served up specialties such as Dixie Chili, South of South of the Border, chili with beans and without beans, vegetarian, Indian Masala style, and authentic Texan. A few were old family favorites and others were experimental inventions.

The Marine Corps team has been entering the chili cook-off for six years. Helping out is one motive. “It’s a Marine thing to do,” said cook Bill Enell. All proceeds from the cook-off go to help the Hogar de Vida, a children’s home in Atenas.

Enell claims that his recipe for Ooh Rah chili is “a secret, but it’s the best chili here.”

Mike Bosley of Bo Bo’s BBQ added cornbread to his chili because “that’s the way my family always ate it” back in Ohio. Texas Tico Red Hot chili was the result of online searches to find the best combination, said Kathy Jones, whose husband Rodney was the cook. Dark-roast coffee was one of the ingredients.

Bill Cahill’s Dixie chili is improvised: There’s no set recipe and it’s never the same twice, he brags. John Randall of the Atenas Bridge Club never made chili before entering chili cook-offs here, “but it’s a good cause,” he said.  He began cooking his meaty chili at four o’clock the day before. (Any bridge players interested in cards or chili can contact him at 8703-9609.)

Raymond Raza borrowed from his native India to make chili masala with lots of unusual spices and flavorings. Chili Willas, the name taken from the word güilas, meaning kids, served his fiery chili dressed in red with matching devil horns.

The cooks started serving at 11 a.m., and the crowds kept coming. And coming. Lines were still forming at 2 p.m. Each person entering the fair grounds at Sabana Larga de Atenas was given a silver bean to deposit in the bean box of their favorite chili. Then, moving along the line, each person was handed a sample cup of  chili, 20 samples in all, and voted by dropping the bean in the respective bean box.

It was not just choosing the best chili that brought out the crowd. Music, line dancing, a concert and sales of other food and craft items filled in the day.

The Chili Challenge was started by Kay Costello of Kay’s Gringo Postres in Atenas to settle an argument between her husband Tom and a customer over what makes a “real chili.” Prove it, demanded Kay. And the race was on. It gets bigger every year, so that now its fame has spread beyond Costa Rica.

Although the count’s not in for this year’s Chili Challenge, last year drew over 2,000 chili tasters and raised about $30,000 to help the kids at Hogar de Vida.