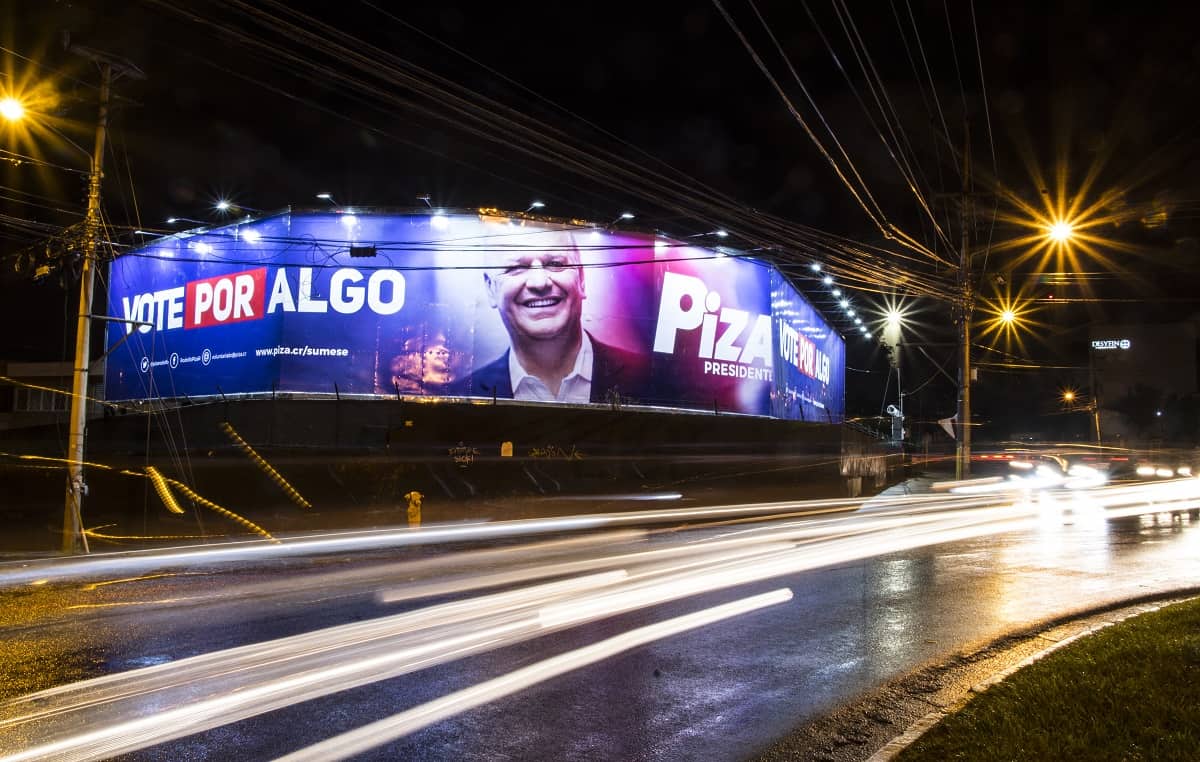 The lawyer Juan Diego Castro has never run for office and belongs to a tiny party that has only produced one elected representative in its history. However, he’s leading the polls in the still uncertain Costa Rican presidential elections on Feb. 4.

Fond of wielding a broom to represent his “sweeping” approach to corruption and crime, the 62 year-old criminal lawyer, known for his glasses and grey mustache, appears to have captured a larger segment of voters than his competitors, though a statistical dead heat is still in place among the three leaders.

The support for the National Integration Party’s (PIN) candidate does not go beyond the 18 percent, well short of the 40 percent minimum necessary to avoid a runoff election on April 1.

Castro, a former Public Security and Justice minister, is followed by the two candidates from Costa Rica’s traditional parties: Antonio Álvarez Desanti of the National Liberation Party (PLN) with 14 percent and Rodolfo Piza of the Social Christian Unity Party (PUSC) with 13 percent.

The remaining ten candidates have less than 10 percent each.

The December poll from the Investigation and Studies Politics Center (CIEP) from the University of Costa Rica (UCR) pointed out that 34 percent of the sample intends to vote but has not chosen a candidate.

The CIEP poll was conducted from Dec. 4-13 with 1,578 telephone interviews and a margin of error of 2.5 points.

Analysts say the election is pretty much wide open.

A second round, Holy Sunday and the poor electoral menu

The political scientist Gustavo Araya, a professor at the Latin American Social Sciences Faculty (FLACSO) and the UCR, said that Castro’s anti-corruption rhetoric has become increasingly popular in the wake of news about the Chinese cement scandal in recent months.

The ongoing judicial and legislative investigations have implicated officials from all three branches of government: the case has thus far brought about the arrest of senior executives from the state-owned Banco de Costa Rica (BCR), the suspension of a Supreme Court magistrates and the former Chief Prosecutor, and the implication of various legislators from multiple parties.

“The topic of corruption benefited Juan Diego Castro because of his long-standing image of a strong character on criminal issues,” commented Araya. “But the topic has passed and the candidates will have to think about what to offer to the voters for the four years they’ll have to govern.”

The 2014 election was the first one since the 1950s in which neither of the two traditional parties are in office. Current President Luis Guillermo Solís hails from the centrist Citizen Action Party (PAC).

In 2014, Solís entered the final stretch of campaign with less than 10 percent of support in the polls and emerged as an alternative to the traditional parties. Some analysts believe that the current election could offer a similar scenario.

“In the past election, almost 40 percent of the voters decided during the final week, and the majority were young. I’ve got the impression that we’ll have a similar process” this year, said Alberto Cortés, political science professor at the UCR.

Cortés added that the candidates who occupy the top three spots are well within reach of those who follow in the polls. He said he thinks Castro has few routes to victory as a less modern candidate who does not connect with the agenda of young voters – and that young voters, in the end, will likely hold the most influence.

In short: everything points towards an election that’ll be defined in a second round in April.