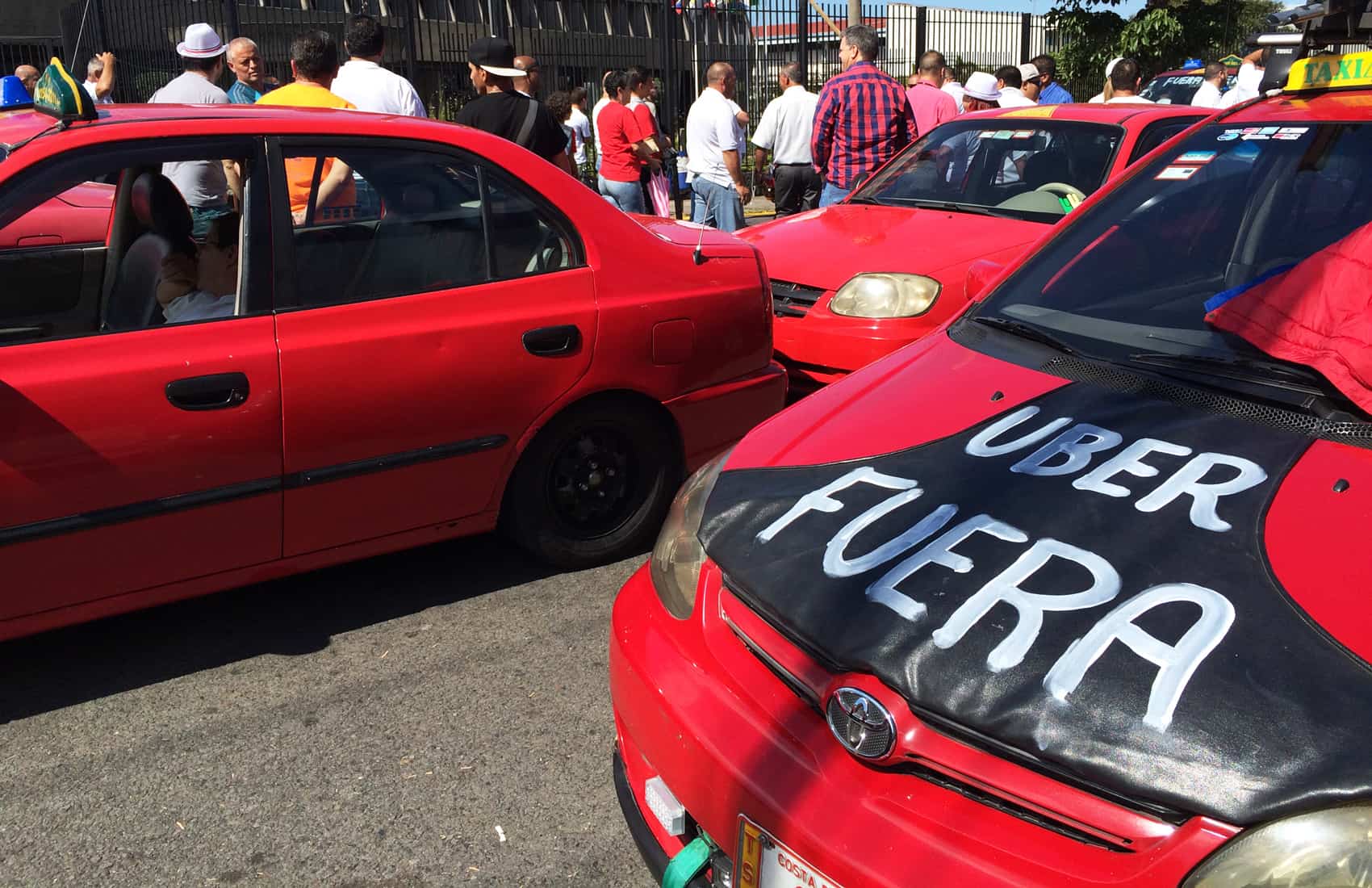 After taxi drivers failed Sunday to convince the Costa Rican government to block Uber, they took to the streets Monday morning, blocking traffic in several parts of the capital and hurling eggs at taxi drivers who didn’t participate in the protest. In response, Uber applied its marketing jujitsu, offering Uber users free rides.

Taxis parked en masse in front of Casa Presidencial. They blocked the bridge and off ramp in Zapote and snarled traffic at La Hispanidad rotunda in front of the San Pedro Mall.

A reporter saw a group of taxi drivers on the Zapote bridge over the Circunvalación highway throwing eggs at other taxis driving past, presumably because they were not participating in the protest. The daily La Nación posted a video on its Facebook page of a taxi driver hurling an egg at a colleague’s windshield.

On Sunday, several government officials met with representatives of the taxi union, who demanded the government block Uber’s application in Costa Rica. President Luis Guillermo Solís’ administration has maintained that Uber’s service is illegal under Costa Rica law — an opinion upheld by the Government Attorney’s Office and the Public Transportation Council. But it has yet to announce a strategy to enforce its interpretation of the law.

Still, Science and Technology Minister Mauricio Jenkins ruled out any government action to block Uber’s application here. “We’re not in the business of censoring the Internet,” Jenkins told reporters Sunday evening. “That is not a step that this government or any other democratic government wants to take.”

Uber expanded its service to Costa Rica last year, despite lacking government authorization. The company, which is valued at more than $50 billion, is now present in 58 countries.

Taxi drivers in Costa Rica claim they are unable to compete with Uber because of higher overhead costs such as operating licenses and insurance.

Uber pounced on Monday’s taxi protest, offering free rides worth up to ₡15,000 — roughly $30 — to all riders between 10 a.m. and 6 p.m. on Monday with the promo code COSTARICANOPARA.

“On a day as hard to get around as today, we’ve decided to give away a free ride to all the members of our community because if #CostaRicaNoPara (Costa Rica doesn’t stop), Uber won’t stop,” the company wrote.