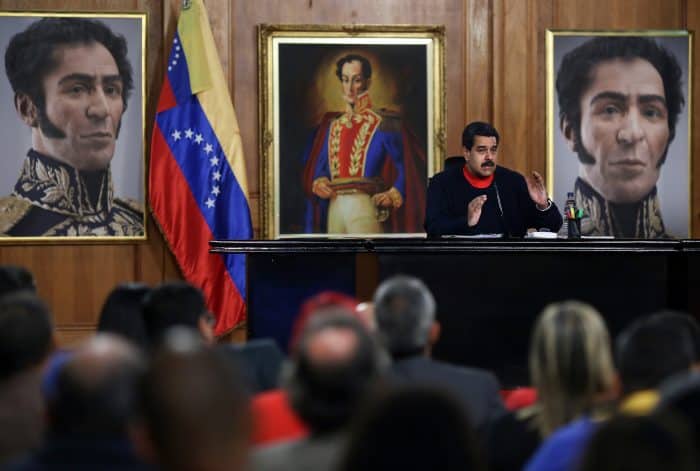 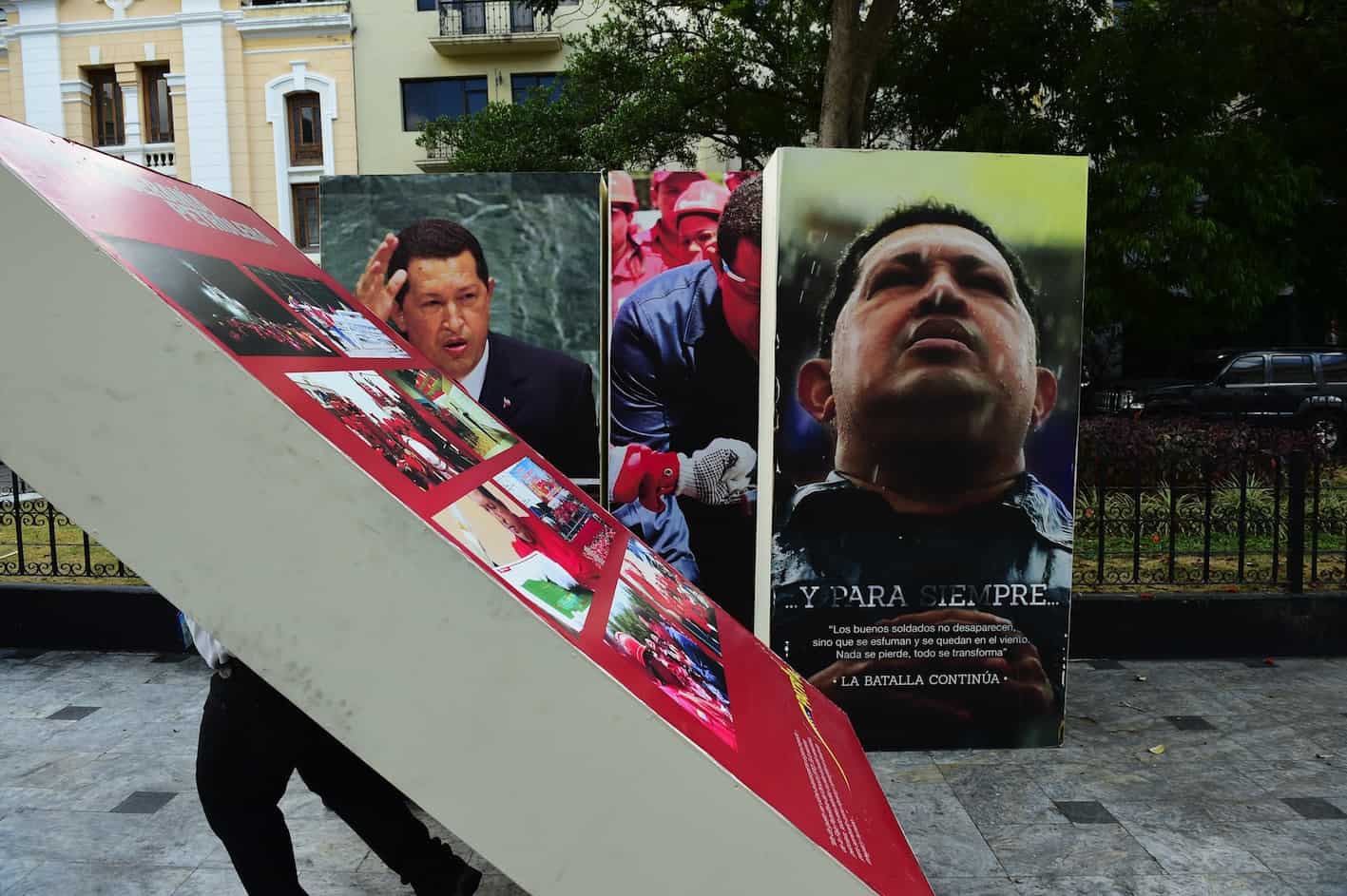 Venezuela National Assembly employees remove from the building pictures of late President Hugo Chavez, in Caracas on Jan. 6, 2016. Venezuela's opposition on Tuesday broke the government's 17-year grip on the legislature and vowed to force out President Nicolás Maduro despite failing for the time being to clinch its hoped-for "supermajority." (Ronaldo Schemidt/AFP)

CARACAS, Venezuela– Venezuela’s opposition launched an offensive Wednesday against President Nicolás Maduro at its first full session in control of the legislature, having vowed to oust him within six months.

Opposition lawmakers in the crisis-hit oil producer were sworn in during a rowdy session on Tuesday as Maduro vowed to resist them with an “iron hand.”

The feared street clashes did not erupt as supporters of both sides rallied peacefully near the congress, kept at a distance by lines of police.

But inside the chamber the political struggle gripping Venezuela intensified.

Lawmakers shouted and scuffled and the pro-government group walked out accusing the opposition of breaking debating rules.

The new opposition speaker of the assembly, Henry Ramos Allup, said his side would within six months propose a way “to change the government by constitutional means” — without giving details.

“Here and now, things will change,” he said.

“We are looking at a change in outlook, a change in the system, at changing what is bad, very bad — and soon will get worse.”

Maduro responded later in comments broadcast on television: “I will be there to defend democracy with an iron hand. They will not make me give ground or waver.”

But he admitted he planned soon to announce a reshuffle of ministers in his government.

The opposition’s first order of business Wednesday was to order all images of former president Hugo Chávez, Maduro’s predecessor and mentor, removed from the National Assembly.

“I don’t want to see any portraits here except for the classic portrait of the Liberator,” Ramos said in the video, in reference to Venezuela’s national hero, Simón Bolívar. “I don’t want to see Chávez or Maduro. Take all of this to Miraflores [the presidential seat] or throw it away.”

Some legislative employees murmured to AFP that the portraits of Chávez should be protected as national patrimony. A guard told reporters that a portrait of Chávez that had hung in the main legislative chamber since the former president died in March 2013 had been removed on Monday for safekeeping by sympathetic legislators.

The opposition MUD coalition holds a majority in the National Assembly legislature for the first time in nearly 17 years after winning elections on Dec. 6.

The National Assembly swore in deputies to 163 of the 167 seats, with four lawmakers — three opposition and one pro-government — suspended pending a lawsuit over alleged electoral fraud.

The Supreme Court suspended them on Maduro’s request, curbing for the time being the opposition’s power to try to drive him from office before his term ends in 2019. The suspensions deprive the opposition of the two-thirds “supermajority” it needs to draft a new constitution — one of the ways to oust Maduro.

With their remaining three-fifths majority they can still remove ministers from their posts. That way they could hope to grind away at Maduro’s government hard enough to force him out.

The first regular sessions of the new assembly were scheduled to start on Wednesday afternoon. One of the first measures the opposition wants to pass is an amnesty for some 75 political prisoners, but Maduro has vowed to block that move.

The U.S. State Department backed the call for political prisoners to be released. It expressed concern over the case of the suspended deputies.

Its spokesman John Kirby called on Tuesday for a “transparent” resolution of the dispute.

Venezuelan Foreign Minister Delcy Rodriguez rejected that as “interference,” in a Twitter message.

The December vote is largely seen as punishment by voters over the state of the economy, in the toughest challenge yet to Maduro’s authority since he took over from his late mentor Chávez in 2013.

Venezuela has the world’s biggest known oil reserves but has suffered from a fall in the price of the crude on which its government relies.

It is in deep recession, with citizens suffering shortages of basic goods and soaring inflation.