The pen against the swords: Author Jorge Galán seeks asylum after threats in El Salvador 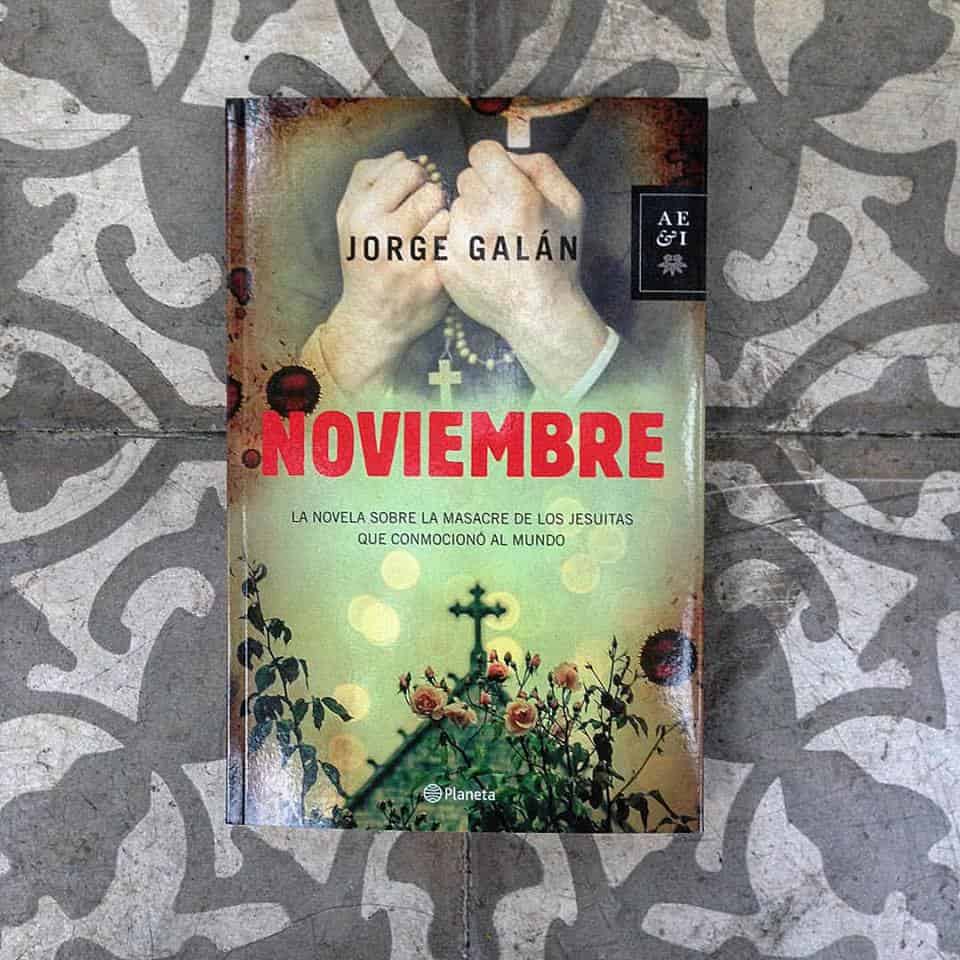 On Sunday, Nov. 1, as he was heading home around noon, Salvadoran poet and novelist Jorge Galán was confronted by two men who threatened him verbally and then drew a weapon. According to Galán, this was not the first time he had been threatened since the publication two weeks earlier of his new novel, “Noviembre,” which chronicles the 1989 massacre of six Jesuit priests, their housekeeper and her daughter.

Jorge Galán presented his new work on Nov. 11 at San Salvador’s Central American University (UCA), the Jesuit university where the massacre took place. Galán fled the country shortly afterward. Galán has not spoken publicly about the threats, and the specific details remain vague. He said yesterday via Internet: “We are living in very tense moments these days.”

Galán is the second author forced by threats to flee El Salvador in the 23 years since the country’s civil war ended with United Nations-brokered peace accords in 1992. In 1997, novelist Horacio Castellanos Moya received death threats following the publication of his semi-autobiographical novel “Revulsion: Thomas Bernhard in San Salvador.” “Noviembre” uses a combination of fictional characters and historical research to retell the story of the morning of Nov. 16th, 1989, when the massacre took place. It was a morning that, as Galán notes in the book’s subtitle, “conmocionó al mundo” – “shocked the world.”

In the acknowledgements, Galán thanks researchers Martha Doggett and Teresa Whitfield for their groundbreaking analysis of the case in 1993 and 1994. He also cites personal interviews with Father José María Tojeira and Father Jon Sobrino, both colleagues and friends of the slain Jesuits; and with Alfredo Cristiani, former president of El Salvador, who was at one time named in (and later removed from) a lawsuit against the killers.

See also: Remembering the Jesuits: Seeking justice in El Salvador after a quarter-century

The book weaves through the history of El Salvador in the 1970s and ’80s, reminding readers of the earlier murders of Father Rutilio Grande (1977) and Archbishop Óscar Romero (1980), and the 1989 FMLN military offensive that rocked the capital. But it is the naming of names of some of the accused masterminds of the Jesuits massacre that has made this book so dangerous for its author.

Jorge Galán, born in 1973 in San Salvador, is the pen name of George Alexander Portillo. He did his undergraduate studies in the early 1990s at the UCA. Since 2000, he has received eight international awards for his writing, in Central America, Mexico and Spain. According to a survey noted on his publisher’s website, Galán is considered the most important Latin American poet born after 1970.

When he received the most recent threats, he left his home country to seek asylum in Spain – the country that is currently seeking to prosecute the murderers of the Jesuits. Galán immediately received strong support from writers and other intellectuals in Spain and elsewhere, who are circulating a “manifesto of support” on his behalf. The list of supporters – currently well over 400 – includes poets Ernesto Cardenal and Sergio Ramírez of Nicaragua, Pulitzer Prize-winner Charles Simic, and Donald Hall, 2006 Poet Laureate of the United States, as well as numerous Spanish artists including singers Joan Manuel Serrat and Joaquín Sabina.

The manifesto states that “memory and culture have a fundamental commitment to oppose impunity and denounce injustices. Therefore we sympathize with the writer Jorge Galán and urge the authorities of El Salvador and the international community to ensure his integrity, to become aware of the seriousness of the events he narrates in his novel and which promote both the knowledge of truth, justice and reparation that the victims deserve.” The book does not appear to offer any new information in the decades-old case. But it does bring the details into a popular and more accessible form. The early work of researchers like Doggett, and the U.S. nonprofit National Security Archive, as well as significant research by the UCA itself have given prosecutors a great deal of information to move forward with indictments. But the most recent legal case – brought in Spain, where five of the six murdered Jesuit priests were born – by the Spanish Association for Human Rights (APDHE) and the California-based Center for Justice and Accountability (CJA) has done the most to move the case forward in recent years.

The Spanish judge in the case, Judge Eloy Velasco, has been gathering testimony since 2009 from numerous witnesses and participants – including housekeeper Luciá Cerna, who sought asylum in the U.S. following the killings. But a recent breakthrough may now move the case along more quickly: the arrest and possible deportation from the U.S. of former Col. Inocente Orlando Montano.

On Aug. 19 of this year, U.S. Magistrate Kimberly A. Swank heard testimony in Greenville, North Carolina on the case to extradite Montano, a former Salvador military officer, to Spain. Montano had been living illegally outside Boston, Massachusetts for many years before he was arrested for immigration violations in 2012 and put in federal detention. So far, the judge has not ruled on the case, citing the need for time to allow both sides to file written petitions. Almudena Bernabeu, recent winner of the Letelier-Moffitt Human Rights Award, is the lead international attorney for the CJA in the case in Spain. Bernabeu is hopeful that a decision will come soon.

“I think the federal judge who handled the criminal case here in the U.S. was very moved and quite agitated by the amount of evidence and how much there was in relation to the Jesuits’ assassination, and we have right now a very solid extradition request against Montano at the [U.S.] Department of State and the Department of Justice,” Bernabeu said.

If the extradition proceeds, Montano would become the highest-ranking former military official ever to be extradited from the United States for human rights violations.

Montano has denied any involvement in the killings, but at the time of the murders, he was vice minister of defense for public security, and allegedly met with the late Col. René Emilio Ponce, El Salvador’s Army chief of staff at the time, and other high-ranking officers to plan the attack on the Jesuits, who were seen as supporting El Salvador’s guerrillas. Both Montano and Ponce had also received training at the U.S. Army’s infamous School of the Americas, or SOA (now called Western Hemisphere Institute for Security Cooperation, or WHINSEC). In fact, 19 of the 26 officers cited in the U.N. Truth Commission report for involvement in the Jesuit murders were graduates of the SOA.

Each year, outside the gates of the school, thousands of protesters gather to call for its defunding and closure. Protest founder Father Roy Bourgeois explained: “That first anniversary back in 1990, we had just a handful of people here and it became a tradition of ours, for the movement, as it began to grow, to come here every November and to call for the closing of the school.”

This year’s protests, organized by the group SOA Watch, are scheduled for Nov 20-22 in Ft. Benning, Georgia. In recent weeks, a Freedom of Information Act request by the Partnership for Civil Justice Fund resulted in the release of hundreds of documents from 2000-2010 showing continuous FBI surveillance and infiltration of the SOA Watch protests. In El Salvador, annual commemorations take place to keep alive the memory of the slain Jesuits and their teachings. In his new novel, which brings the ongoing case and investigation to a popular audience and a new generation, Jorge Galán’s character says at the end: “How did this history begin? … not with the [FMLN] offensive in 1989, not with the death of Romero, nor with that of Rutilio [Grande] … it began in 1950, when Ignacio [Ellacuría] raised his hand and volunteered as a young novice to go to Santa Tecla.”

Father Ellacuría, rector of the Jesuit University at the time of his murder, remains a powerful force in the Catholic teaching of liberation theology. He felt that the only way to end the war in El Salvador was to end that country’s injustice and inequality. It was this that made him the target of the military high command. Norman Stockwell is a freelance journalist based in Madison, Wisconsin. He also serves as operations coordinator for WORT-FM Community Radio. Stockwell has reported from numerous countries in Latin America, and he covered the 1989 murders for WORT. He covered the 20th anniversary commemorations for the Capital Times and Free Speech Radio News.