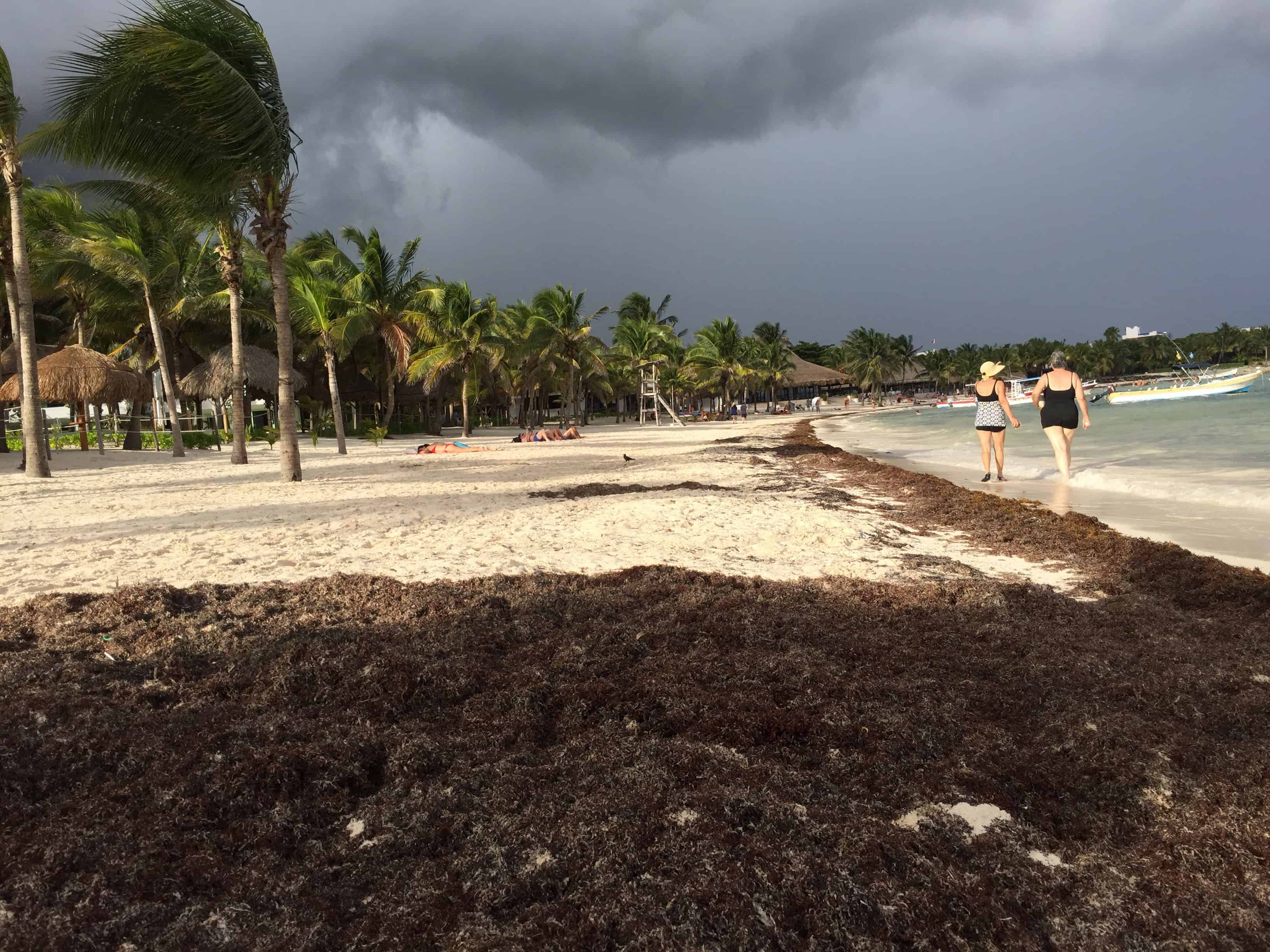 Sargassum, a type of seaweed, piles up on the beach of Akumal, a tourist town south of Cancún. The Caribbean coast of Mexico has had to deal with a surge in seaweed this year that has hurt the tourism industry. (Photo by Joshua Partlow for The Washington Post)

CANCÚN, Mexico – Surrounded by a four-man camera crew, the Japanese honeymooners were ready to make memories.

In their wedding whites against the turquoise Caribbean waters, the couple leapt off the beach and kicked their heels. Then they whipped out matching sombreros and unfurled a giant Mexican flag. Their photo shoot was perfect, if you could ignore the smelly strip of brown algae fouling the white sands.

“It’s disgusting,” photographer Juan Manuel Delgado said. “I’ve worked on the beaches for 21 years, and this is something that has never happened before.”

From Barbados to Belize, Cancún to Tulúm, a viny brown seaweed known as sargassum has invaded the Caribbean basin this year. Vast floating mats have washed up and buried beaches. The piles of seaweed grew more than four feet high in Antigua and forced some people to abandon their homes. Tobago’s legislature declared a natural disaster last month as the stench of decomposing seaweed, and the dead fish and turtles caught within it, caused nausea among tourists. Hilary Beckles, the vice chancellor of the University of the West Indies, called it “the greatest single threat to the Caribbean economy I can imagine.”

For Mexico, whose Caribbean coastline attracts more than 10 million visitors and generates $8 billion in tourism-related revenue a year, the arrival of sargassum became a Cabinet-level crisis. When José Eduardo Mariscal de la Selva, the director general of Cancún’s maritime department, received a photo one morning in July from his beach cleaners, he assumed it was a joke. Within days, the country’s tourism and environment ministers were touring Cancún to assess the calamity.

Mexico’s tourism industry is like an aging gladiator, having battled swine flu outbreaks, drug-war violence and intense storms over the past decade – including Hurricane Patricia, which sent sunbathers fleeing the Pacific coast last week. Now, some local authorities question whether seaweed might strike the fatal blow.

“Beaches are what we sell to the whole world and what we depend on, directly or indirectly, for all our income,” Mariscal said. And hotel guests paying $500 a night do not want to open the shades to find paradise matted down under layers of stinking, fly-infested algae.

Since the July invasion, Mexico has launched a herculean cleanup effort. Along the coast of Quintana Roo state, the government hired 5,000 day laborers in four-hour shifts to rake seaweed from more than 100 miles of beaches.

From one popular stretch of Cancún, workers hauled off half a million cubic feet of seaweed – more than 1,000 truckloads, Mariscal said. Cancún gave local boozers the chance to leave the town drunk tank early if they put in time on the seaweed chain-gangs. The federal government has budgeted $9 million so far to remove the stinky mess, and hotels are expected to pay millions per month for further maintenance.

The Mexican navy has deployed its oceanographers to track the seaweed and launched research voyages to study “what provoked this arrival,” said Rear Adm. Fernando Alfonso Angli Rodríguez. There are proposals to buy boats and floating barriers to block the seaweed before it reaches the beaches. And the navy is currently testing a hydraulic suck-pump that has been used in the Dominican Republic.

“The best way to collect sargassum is in the sea, before it sinks,” said Angli, the navy’s director general for oceanography. “We are working on this very hard.”

This type of algae is not new to these parts. Christopher Columbus noted its abundance, and it is how the Sargasso Sea, in the north Atlantic, got its name. In the past, it wasn’t seen as much of a nuisance, as it provides a floating habitat for turtles, fish and birds. But spikes in the growth of sargassum were recorded starting about five years ago. To the left, Cancún, Mexico, and at the upper right, the Sargasso Sea, the only sea on Earth without a coastline. Google Maps

This year’s bountiful bloom has baffled seaweed scientists. Chuanmin Hu, a professor of optical oceanography at the University of South Florida, who tracks the sargassum by satellite, said that the summer of 2015 showed the largest coverage in history. He calculated that there were 12,300 square miles of sargassum this July, about the size of Maryland, compared with 2,300 square miles four years earlier.

Scientists have offered different theories to explain the anomaly, from climate change that has shifted ocean currents to increased runoff from farms in the Amazon into the ocean. “What caused this?” Hu asked. “That is still a mystery.”

Along the most popular Cancún tourist beaches, authorities have now fought the sargassum to a draw, particularly as the amount washing up has eased up in recent weeks. But farther south, in places such as Akumal, Tulúm and Mahahual, visitors who come for Mayan ruins and tropical beaches still have to deal with festering piles of seaweed.

“I don’t mind it so much,” Stefano Bilosi, a 29-year-old Italian honeymooner in Akumal, sunbathing next to a musky thatch of seaweed, was saying when his new wife, Federica Brentaro, interjected.

“She didn’t swim,” he admitted.

“I enjoy it. It’s part of the ocean. It doesn’t hurt you or anything; it doesn’t sting you,” she said. “You just get through it, and you get over it. It’s not a big deal, I don’t think. That’s coming from a backpacker’s point of view.”

The frantic cleanup has now prompted its own backlash, as environmental groups protest the use of backhoes and bulldozers to move seaweed mountains. The Mexican Center for Environmental Rights said hotels’ reliance on heavy machinery and shoreline netting is causing damage to species that frequent the beach. Alejandra Serrano Pavón, a regional director, has collected photographs of dead sea turtles.

Authorities say that the collected sargassum can be used to fortify sand dunes and be reprocessed into fertilizers for public parks and gardens. But those silver linings don’t mean much to the average Mexican hotel owner.

“The cruises are going to arrive in October, and the tourists are not going to want to set one foot in this town because of the pestilence here,” said Cristobal Aguilar, who runs the Hotel Arenas in Mahahual, farther south along the coast. His hotel is offering 25 percent discounts to attract customers willing to ignore the vegetative stench.