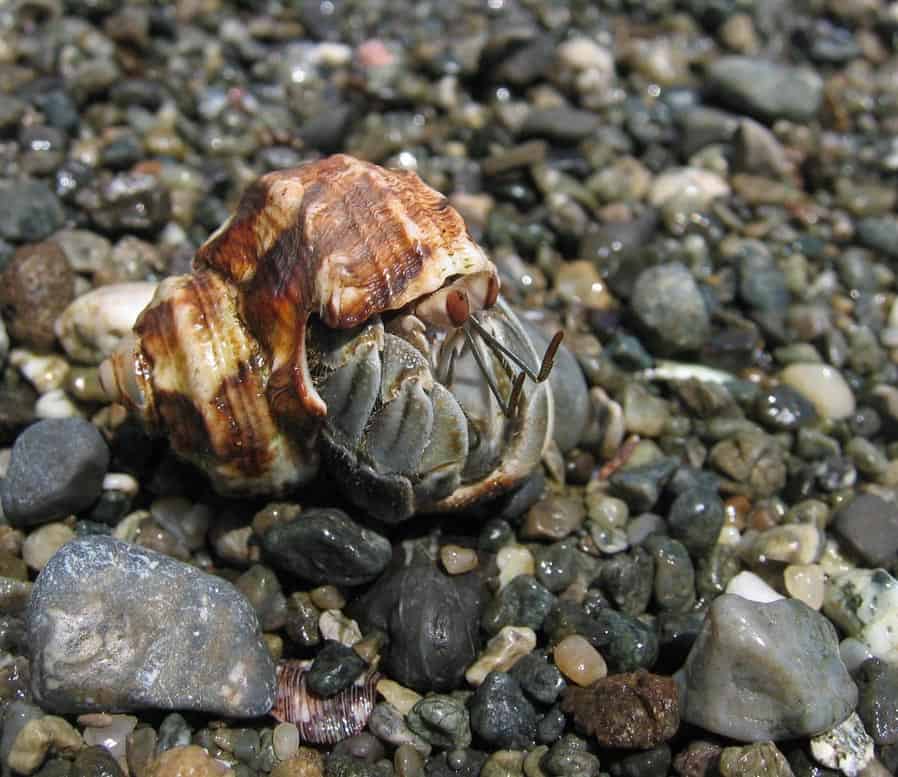 If you’ve ever picked up a shell from a beach in Costa Rica, you may have found it was already occupied. Millions of hermit crabs inhabit Costa Rica’s shores and tend to quickly scoop up the limited number of shells washing up on the beaches, but the process of finding the right shell is far from easy.

Of the 800-plus species of hermit crabs in the world, only 15 live on land. Sea-dwelling hermit crabs can easily find a new home thanks to the high number of predators capable of sucking snails from their intact shells. No such predators exist on land, forcing surface-dwelling crabs to wait patiently for a suitable shell-ter to wash ashore. The Ecuadorian hermit crab (Coenobita compress), the most common terrestrial hermit crab on the Costa Rican Pacific, are notoriously picky about their shells.

The crabs face threats from pollution and human seashell collection, which have restricted the number of usable homes. This is particularly challenging, as the crabs are forced to switch shells multiple times as they outgrow old shells. When a rare shell does wash ashore, Ecuadorian hermit crabs have to hollow out extra space in the shell to accommodate their legs, claws and eggs. The remodelling process is laborious, and the crabs prefer to use the pre-fabricated shells of other crabs, but Ecuadorian hermit crabs live like, well, hermits, and rarely socialize except to breed. Over the years as shell shortages have increased, scientists uncovered one other activity that makes the hermits come out of their shells.

A 2012 study conducted in Costa Rica’s southern Pacific Osa Peninsula found that Coenobita compress had been forced to abandon its loner ways over the years as shells became harder to come by. Researchers tied individual hermit crabs to a post and watched as other crabs gathered, looking to trade up to a larger shell. The study found that once three or more hermit crabs are in the same place, other nearby hermit crabs quickly converge on the spot for a shell-swap.

The crabs form a sort of conga line, ordering themselves by size, with each crab grasping the shell of the crab one size up. At some point, the hermits pry the largest crab from its shell spurring a chain reaction. Each crab moves up a shell after it is vacated.

The adorable game has a dark side, however. Hermit crabs may be all armour and claws on the outside, but their body inside the shell is soft and unprotected. One crab always always loses out and takes the smallest shell, which is often not large enough to protect its vulnerable abdomen. A too-small shell is usually a death sentence for a hermit crab, which can be picked up by a predator or baked in the sun.

In hermit crab world, upgrading to a bigger house is a fight to the death.