Obama courts middle class in State of the Union address 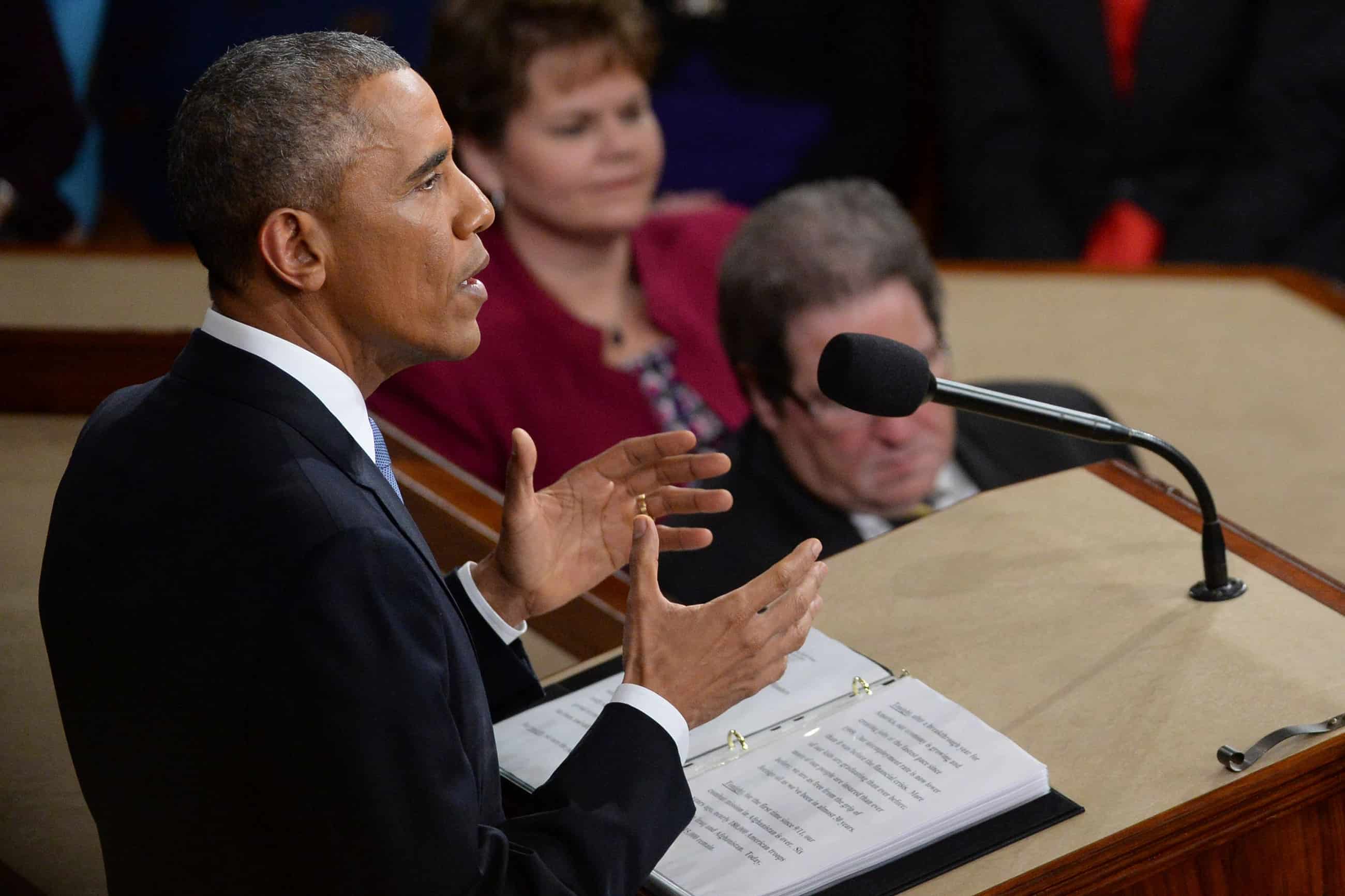 U.S. President Barack Obama delivers his State of the Union address before a joint session of Congress. (Washington Post photo by Andrew Harnik)

WASHINGTON, D. C. — U.S. President Barack Obama, who took office six years ago amid a historic recession and two U.S. wars, declared unequivocally Tuesday that the nation had clawed its way out of those dire straits, praising Americans for their resilience but also pointedly taking credit for leading the way.

“America, for all that we’ve endured; for all the grit and hard work required to come back; for all the tasks that lie ahead, know this: The shadow of crisis has passed,” Obama said in his sixth State of the Union address to the nation and a joint session of Congress in the House chamber.

After years of fighting with Republicans over where to take the country, Obama delivered an hour-long defense of his policies that at times sounded like a victory lap. He asserted that the brightening economic picture — including accelerating job growth, more people with health insurance and lower gas prices — had proved that he was right, and his adversaries misguided, all along. First Lady Michelle Obama, left, is introduced to the audience at the U.S. Capitol where President Barack Obama delivers his State of the Union address before a joint session of Congress. Washington Post photo by Bill O’Leary

The president had been cautious over the past two years not to gloat over news of fitful economic growth, mindful that the economy remained tenuous and public confidence uneasy. But with the jobless rate well below 6 percent, the stock market nearing record highs and his job approval ratings rebounding, Obama on Tuesday night dropped his veneer of reserve and appeared to delight in having proven his critics wrong.

“At every step, we were told our goals were misguided or too ambitious, that we would crush jobs and explode deficits,” he said. “Instead, we’ve seen the fastest economic growth in over a decade, our deficits cut by two-thirds, a stock market that has doubled, and health-care inflation at its lowest rate in 50 years.”

“So the verdict is clear,” Obama said.

At times Tuesday, Obama chided Republicans to help improve Washington’s political discourse, and he harked back to the themes of national unity that helped him get elected in the first place back in 2008.

But in doing so, he also served to remind members of the GOP of the reasons their relationship is so fraught.

When Republicans jokingly applauded after Obama noted that he had run his last campaign, the president paused and broke from his prepared text to deliver a spontaneous barb: “I know because I won both of them.”

Obama took the spotlight in front of Vice President Joe Biden and House Speaker John Boehner, R-Ohio, intent on proving that he would remain relevant in the final quarter of his presidency as the race to select his replace him next year begins.

Just two months after Democrats suffered a severe blow in the midterm elections, when voters handed control of both chambers to the GOP for the first time during his tenure, Obama’s speech came amid warnings from Republicans to avoid divisive rhetoric and policies. President Barack Obama delivers his State of the Union address before a joint session of Congress on Tuesday. Washington Post photo by Bill O’Leary

But Obama had told allies that he would not kowtow to GOP demands despite the party’s new majorities. The president announced early in his speech that he would focus less on the usual “laundry list” of new proposals — the White House had revealed most of them ahead of time — and instead focus on the “values at stake” for the American people moving forward.

He framed portions of his address around a letter he received from a woman in Minneapolis named Rebekah Erler, who said that she and her husband struggled to pay bills during the recession shortly after they were married and had a son.

“We are a strong, tight-knit family who has made it through some very, very hard times,” Obama said, quoting a letter from Erler, whom he visited during a trip to the Midwest last summer. She was among the guests in First Lady Michelle Obama’s box.

The president said Erler’s story was a metaphor for the nation’s. “It’s been your effort and resilience that has made it possible for our country to emerge stronger,” Obama said. “Fifteen years into this new century, we have picked ourselves up, dusted ourselves off, and begun again the work of remaking America. We’ve laid a new foundation. A brighter future is ours to write.”

In the wake of the GOP rout in the midterms, the president responded by announcing a series of aggressive executive actions, including measures to protect millions of illegal immigrants from deportation, to work toward reestablishing diplomatic relations with Cuba and to strike a climate agreement with China.

Related: US officials in Cuba to discuss embassies

The moves angered Republicans, who challenged the president to heed the message of voters, who had handed the GOP control of both chambers of Congress.

Instead, the White House continued its strategy into the new year, rolling out the major proposals for the next year in a presidential tour ahead of the State of the Union address. Obama laid out proposals to revamp the tax code by raising taxes and fees on the wealthiest Americans and largest financial institutions — and using the money to pay for free tuition for two years of community college and for a $500 tax credit for married couples in which both spouses have jobs.

Though the White House knew the ideas have a slim chance of being approved by lawmakers, the point was to start a debate on Obama’s terms. And the president and his advisers were determined to begin to frame his legacy as having delivered on his promise to improve the lives of ordinary Americans. Members of the media set up cameras to interview inside Statuary Hall on the evening of the State of the Union Address at the U.S. Capitol Building. Washington Post photo by Andrew Harnik

On foreign policy, Obama sought to build on the idea, first enunciated during a lengthy speech at West Point last spring, of a “smarter kind of American leadership” in which the United States balances military intervention with diplomacy and coalition-building.

Obama has made the case in recent weeks, as he marked the end of U.S. combat operations in Afghanistan, that the nation is safer after more than a decade of combat abroad — even though he authorized renewed U.S. military operations in Iraq and Syria to combat the Islamic State militant group.

U.S. leadership “is stopping ISIL’s advance,” Obama said, using an acronym for the group. But such a declaration seemed premature, set against images Tuesday of two orange-clad Japanese hostages kneeling in the desert before a blackrobed militant.

Ahead of the speech, cable networks showed footage of U.S. Navy warships stationed in the Red Sea off the coast of Yemen, where the government was in danger of collapsing and the U.S. Embassy was in potential danger, providing stark reminders about the threats to American values around the world.

In addition to the annual State of the Union traditions — such as Obama’s lunch with television news anchors at the White House — presidential aides noted that Obama spoke Tuesday with French President François Hollande about the aftermath of the terrorist attacks in Paris two weeks ago.

“The State of the Union & the State of the World are far from alignment,” Ian Bremmer, president of the risk analysis firm Eurasia Group, observed on Twitter.

But Obama was determined to project an optimistic view of the nation’s future, and he maintained faith that the country could rise above its divisions. He alluded to his own diverse upbringing in Hawaii and Chicago and cited his keynote address as an Illinois state senator at the 2004 Democratic National Convention, which launched him on the national political radar as a bright young prospect for higher office.

The president acknowledged that he had heard the political pundits declare since he took office six years ago that he had failed to make good on his vision at a time when “our politics seems more divided than ever. It’s held up as proof not just of my own flaws — of which there are many — but also as proof that the vision itself is misguided, and naive.”

To the contrary, Obama insisted, as he pledged to keep working to change Washington, even as he was, in many ways, declaring victory over his rivals.

“I want this chamber, this city, to reflect the truth,” he said, “that for all our blind spots and shortcomings, we are a people with the strength and generosity of spirit to bridge divides, to unite in common effort.”