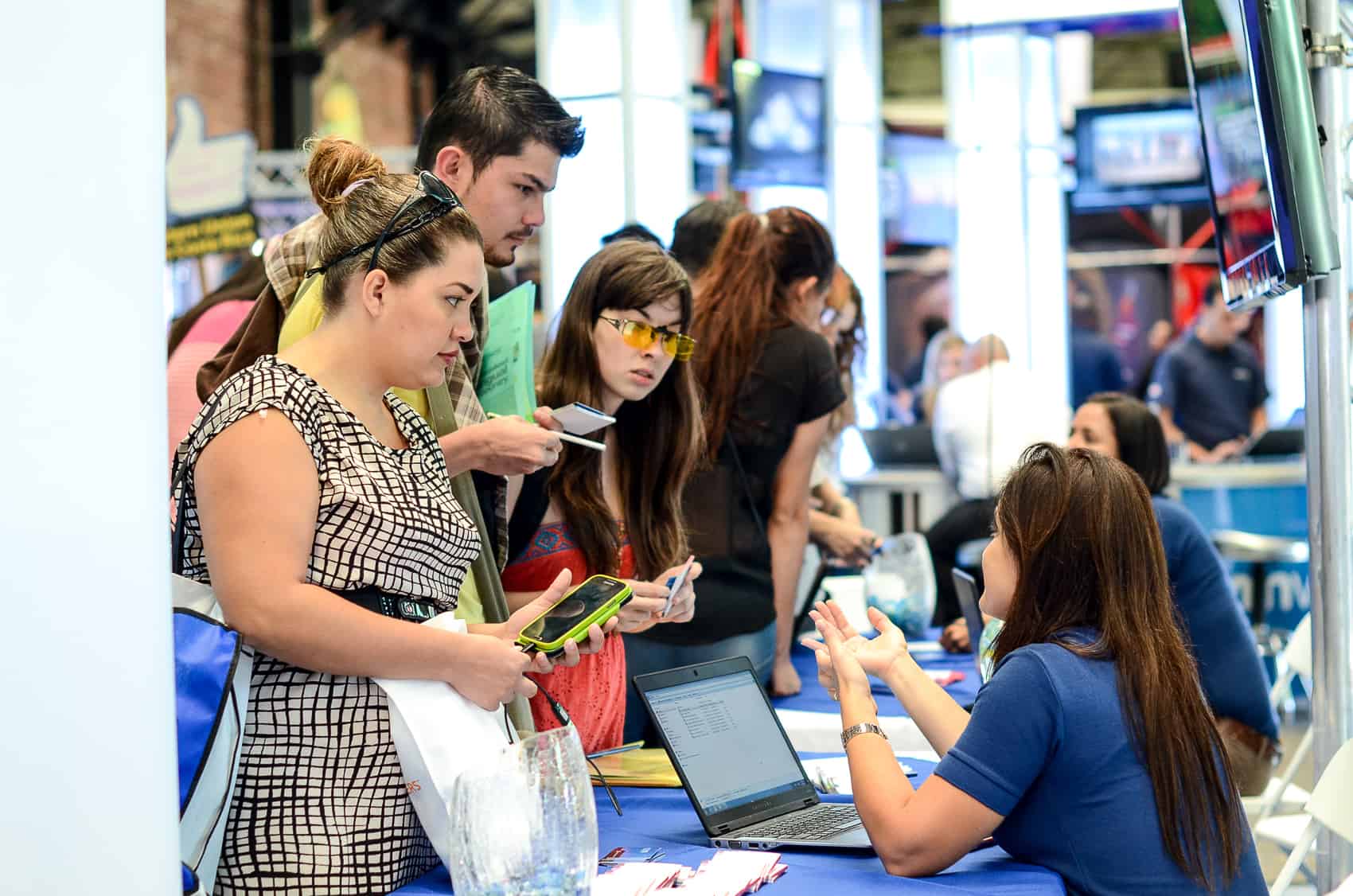 Job seekers at a CINDE employment fair in February 2014. More than 60 percent of businesses surveyed during the third quarter of last year said they do not plan to hire more staff in 2015. (Alberto Font/The Tico Times)

The halls were decked with lights and wreaths at the offices of Costa Rica’s Union of Private-Sector Chambers and Associations (UCCAEP), an organization that represents over 40 national businesses, but there was little holiday cheer in the group’s latest business survey. Over 60 percent of businesses surveyed in the report said that they did not plan to hire any new employees in 2015, according to results released Wednesday.

The business confidence rating continued to drop during the third quarter compared to the same period since 2011. The outlook for the fourth quarter was relatively stable compared to the same period in 2013 but did not break the downward trend seen in previous surveys. More than 60 percent of respondents said that they have seen a significant increase in their cost of doing business, especially the cost of electricity and fuel.

If it were up to the survey respondents, the Legislative Assembly and the president would both get coal in their stockings for poor performance tackling these issues. Some 73 percent of respondents opined that authorities were not taking sufficient action to curb the rising cost of electricity in the near future. Sixty-four percent said that authorities are not taking sufficient steps to “reactivate” the national economy.

“We’re concerned about the loss of confidence in the sector, because without confidence there’s no investment, and without additional investment it will be impossible to create the jobs this country needs,” said UCCAEP President Ronald Jiménez. The survey showed that 63 percent of respondents felt that it was not a good time to make new capital investments.

See also: Ex-President Óscar Arias says the country is on the wrong path

Job prospects for unskilled labor did not look positive from the survey. Twenty-eight percent of respondents said they planned to lay off employees before the end of 2014 with the planned cuts consisting mostly of unskilled and semi-skilled workers. Luis Mesalles, UCCAEP treasurer and economist, stressed that this is another sign that the government needed to continue improving high school graduation rates and technical training to keep Costa Rican workers relevant to the current economy and improve the country’s competitiveness.

Mesalles said that Costa Rica’s deficit and lingering questions about the 2015 budget, which the Constitution requires lawmakers to pass by Thursday, was one of the main causes of uncertainty in the business community.

“If nothing is done to address the budget — making cuts, generating new sources of income or better use of public funds — interest rates are going to rise, the country’s sovereign debt rating will fall, and this would pave the way for an important fiscal crisis if we do nothing,” the economist said.

UCCAEAP surveyed 460 business managers and owners from small, medium and large companies between the last week of October and the first weeks of November. The survey has a margin of error of +/- 5.6 percent and a confidence level of 95 percent.