‘Virus’ is solo performance at its finest 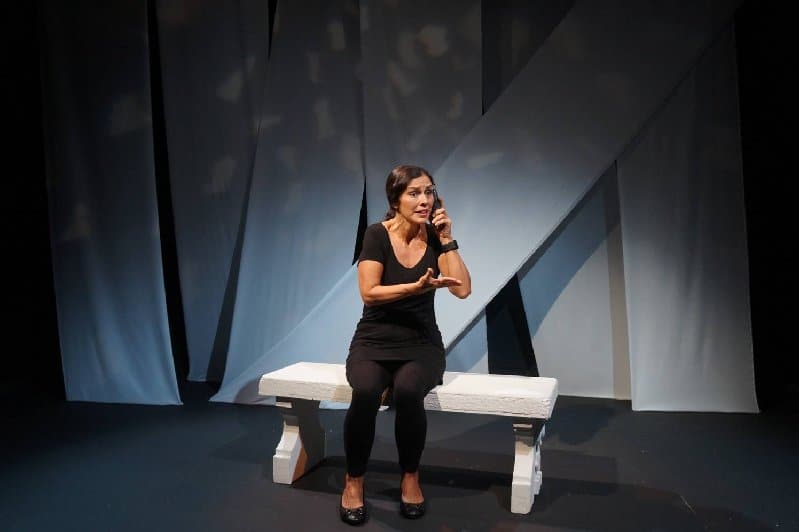 When people get seriously ill, they rarely suffer alone. Whether it’s cancer or HIV, depression or STDs, their trauma sends ripples of emotion through family and friendships, having an impact on those they meet. This point is simple but powerful, and such an intense social theme is perhaps the last thing you would expect from a one-woman show.

“Virus,” now playing at the Vargas Calvo Theater in San José, is a startling feat, not only because Ana Istarú wrote the script and performs the entire play herself, but also because she explores illness – specifically, human papillomavirus – through so many different voices and personas. She plays the central character, Melissa, at several different ages, from rebellious adolescent to remorseful mother. She plays Melissa’s mother, her physician, her motorcyclist boyfriend, and a handful of other folks, making each character vocally and (harder still) physically distinct.

There are many ways to perform a solo show, the most common being a first-person monologue that tells an entire story. Surely the most difficult approach is the one Istarú has chosen: a one-person ensemble piece that requires the actor to perform entire scenes of interactive dialogue without assistance. Istarú changes voices as easily as one would flip a light switch. She uses simple costumes and a nondescript bench to build entire environments. By the time a scene ends, we feel rooted in a place – an examining room, a living room – and are winded by the interchange. In "Virus," playwright and performer Istarú plays a wide range of characters, both male and female. Courtesy Teatro Nacional

A superlative show requires a competent team, of course, and Istarú wisely collaborated with director Manuel Manolo Ruiz to help her block and refine her performance. “Virus” employs simple technical support, from Eloy Mora’s multimedia to Ruiz’s own sound design, to distinguish one scene from the next. The Vargas Calvo is a very confined performance space, but Istarú and her cohort transform it into an entire world.

One caveat: Istarú performs the show in Spanish, and there is no mercy for the remedial speaker. Many of her characters speak in youthful slang, and the dialogue can be very hard to follow. Some of her vignettes are so short and punchy that even fluent Spanish speakers may struggle to keep up. Istarú’s narrative does leave a few questions unanswered. But if you try, your focus will be rewarded. The closing monologue should devastate you, no matter what your language skills, and with any luck, Istarú’s show will go viral.