Gross, US contractor held in Cuba, goes on hunger strike 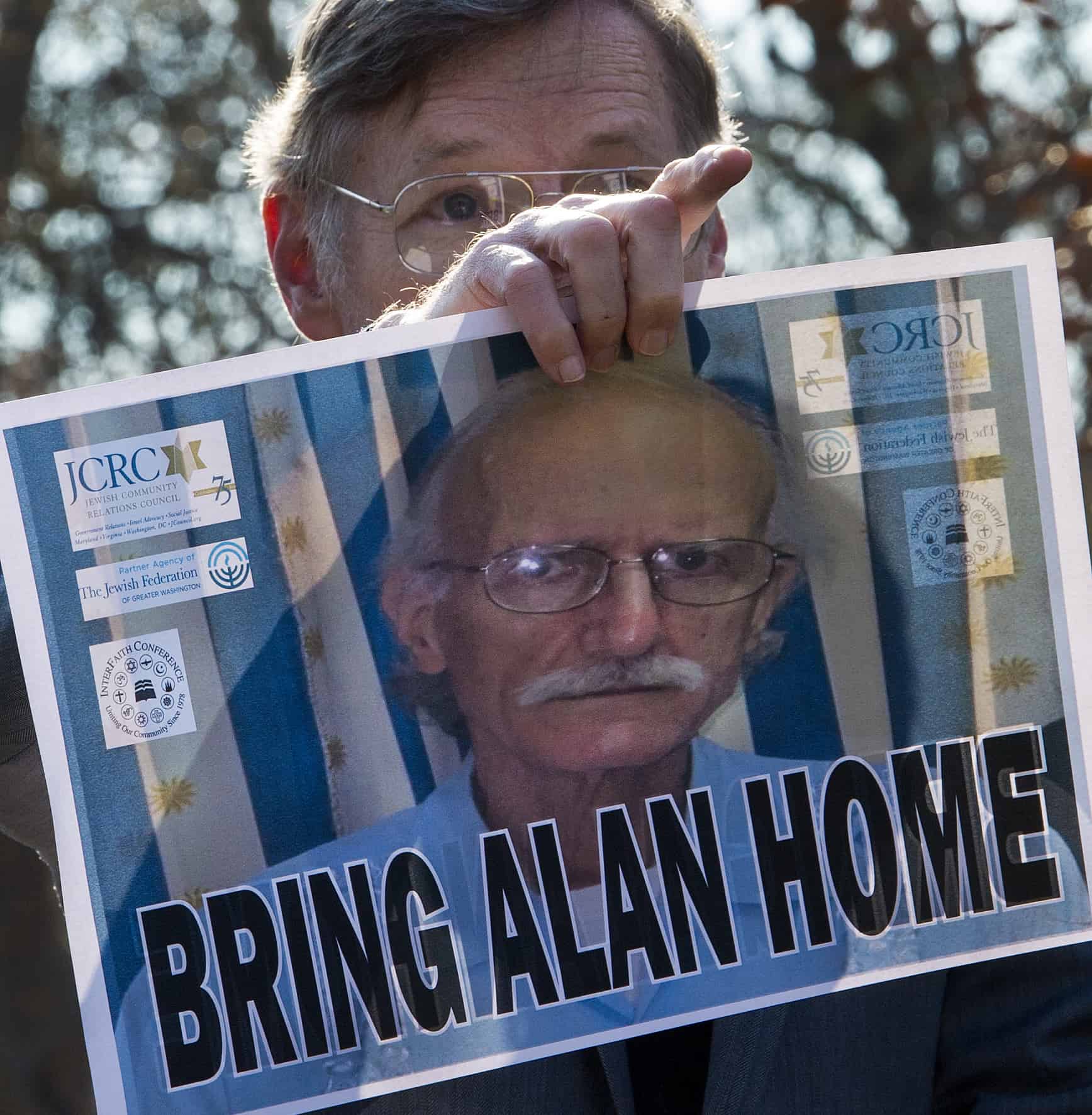 Clark Lobenstine, executive director of the InterFaith Conference of Metropolitan Washington, speaks on behalf of imprisoned U.S. citizen Alan Gross, who has been held in a Cuban prison for more than 4 years, during a Washington, D.C. rally in December 2013. (Paul J. Richards/AFP)

Alan Gross, the U.S. government contractor who has been imprisoned in Cuba for more than four years, began a hunger strike last week to protest his treatment by both the Cuban and U.S. governments, his lawyer said Tuesday.

“I am fasting to object to mistruths, deceptions, and inaction by both governments, not only regarding their shared responsibility for my arbitrary detention, but also because of the lack of any reasonable or valid effort to resolve this shameful ordeal,” Gross said in a telephoned statement to his legal team.

As he has many times before, Gross called on U.S. President Barack Obama to become personally involved in efforts to free him from “inhumane treatment” in a Cuban prison.

Gross was arrested in 2009 for distributing Internet and other communications materials in Cuba under a program funded by the U.S. Agency for International Development. He was sentenced to 15 years for crimes against the Cuban state and is said to be in poor health.

His case moved back into the limelight last week following revelations about a separate USAID program to undermine Cuba’s communist government with a Twitter-like network designed to build an audience among Cuban youth and push them toward anti-government dissent. While unclassified, administration officials have described the program as “discreet.”

The “Cuban Twitter” program, called ZunZuneo before it was discontinued in 2012, caused an uproar among U.S. lawmakers who charged they had never approved spending for it. Sen. Patrick Leahy, D-Vt., who heads the appropriations subcommittee in charge of the USAID budget, called the program a “cockamamie” idea during a congressional hearing on Tuesday.

Others have praised the program, which they called laudable effort to circumvent Cuban restrictions on Internet freedom. Such efforts help “provide uncensored access to information and communications for the Cuban people and others struggling around the globe against repression, censorship and the denial of basic human rights,” Sen. Robert Menendez, D-N.J., chairman of the Foreign Relations Committee, said in a statement.

Since 1996, Congress has appropriated more than $200 million for “democracy assistance” programs in Cuba. USAID has been given wide discretion in deciding what the money is used for. Most of the programs are subcontracted to firms like Development Alternatives, Inc., which received a $6 million contract, under which Gross was working.

On Tuesday, USAID Administration Rajiv Shah said the ZunZuneo program was lawful and part of the agency’s efforts to promote the free flow of information in the island nation.

In a statement, Gross’s lawyer, Scott Gilbert, said the program had put Gross’s life in greater jeopardy. “Once Alan was arrested, it is shocking that USAID would imperil his safety even further by running a covert operation in Cuba,” Gilbert said. “USAID has made one absurdly bad decision after another. Running this program is contrary to everything we have been told by high-level representative of the Obama administration about USAID’s activities in Cuba.”

Gross, a 64-year-old Maryland resident, has lost more than 110 pounds since his arrest and is held in a small cell with two other prisoners for 23 hours a day. His lawyers said Gross told them that the “Cuban Twitter” effort “was the final straw for him” and prompted his decision to go on a hunger strike.

Even as he has criticized the program that landed Gross in prison, Leahy has criticized what he and others have called the administration’s inattention to the case. In a November letter to Obama, Leahy spearheaded a letter signed by a bipartisan group of 66 senators urging the president to “act expeditiously to take whatever steps are in the national interest to obtain [Gross’s] release.”