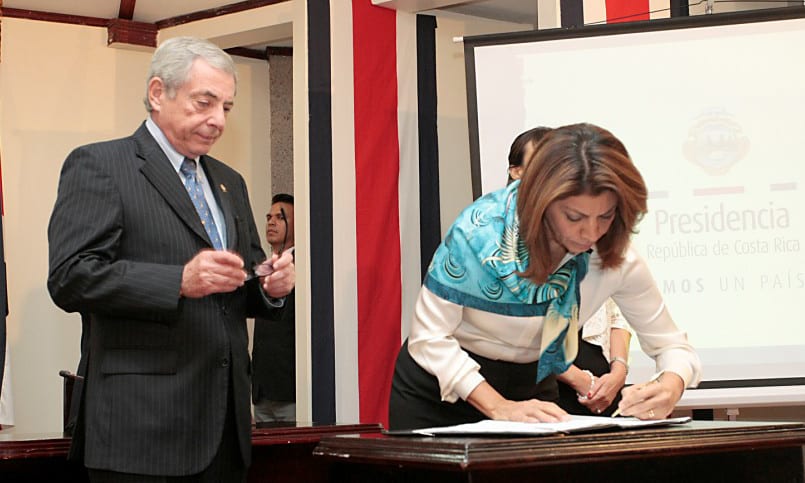 President Laura Chinchilla signed a bill into law Tuesday establishing a mechanism to implement the United Nations’ Optional Protocol to the Convention against Torture.

The protocol establishes an independent national body to prevent torture, cruel punishment and other degrading treatment of prisoners and other people deprived of liberty.

“This is one more of many actions in the field of human rights that highlights Costa Rica on the international stage, and we hope that other countries also join, because torture, cruel treatment or sentences do not achieve credibility,” Chinchilla said.

The unit, under the administration of the Ombudsman’s Office, will periodically examine the treatment of detainees and make recommendations to authorities on how to improve their conditions and treatment. The group also will make observations on current legislation and play an active role in its adaption to their recommendations.

The mechanism will operate with “absolute independence and without interference by State authorities,” according to a statement from Casa Presidencial.

“With this new law, our country complies with the obligations of the Optional Protocol and the recommendations of the United Nations for the prevention of torture, and once again situates Costa Rica in the vanguard and a position of leadership in Latin America,” said Justice Minister Ana Isabel Garita Tuesday at the Casa Presidencial.

Garita added that the protocol could make recommendations on how to address Costa Rica’s prison overcrowding crisis.

The bill was ushered through the Legislative Assembly by independent lawmaker Luis Fishman, who also attended the signing Tuesday.