Latin American summit opens in Cuba with attack on US spying 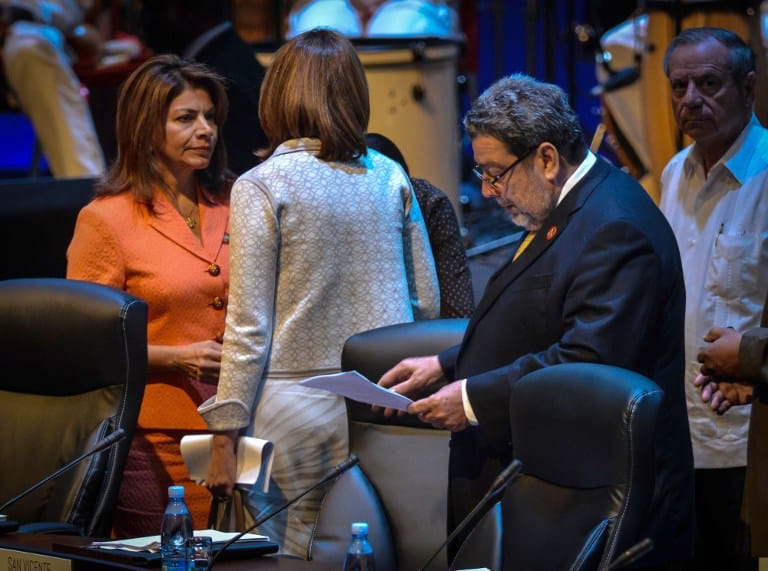 Costa Rican President Laura Chinchilla, left, and St. Vicent and the Grenadines PM Ralph Gonsalves participate in the opening ceremony of the Second Summit of the Community of Latin American and Caribbean States (CELAC), on Jan. 28, 2014 in Havana. (Adalberto Roque/AFP)

The meeting – which began with a moment of silence for the late leader – was hosted by Chávez’s closest ally, communist Cuba, in a major diplomatic coup for a country Washington has tried to isolate through a five-decade-old trade embargo.

Analysts said it sends a strong signal to the United States that the region will no longer accept Cuba’s isolation – even if U.S. policy is unlikely to change.

Castro, trading his usual general uniform for a dark blue suit, used his opening remarks in part to fiercely criticize the vast U.S. phone and email spying operation that has raised international consternation, especially among allies such as Mexico and Brazil included among surveillance targets.

The secretive NSA program, details of which were leaked by former U.S. contractor Edward Snowden, “raises concerns about its potential to cause international conflicts,” Castro said, adding that the world needs to “prevent cyberspace from becoming a theater of military operations.”

And he suggested the United States – referring obliquely to “the so-called ‘centers of power'” – was not ready to give up its “control of the rich region.”

The CELAC bloc of 33 Latin American and Caribbean nations was the culmination of an effort by Chávez to bring together both right-wing and leftist governments to counter the influence of the United States.

The group will declare itself “diverse but united” Wednesday, when it signs a more than 80-point statement that also hints at distancing the region from the United States, whose influence has been weakening in recent years.

The meeting in Cuba also allows leaders to make a statement about the region’s commitment to Havana.

“Today, Cuba is the capital of our America,” Nicaragua’s President Daniel Ortega said as he arrived for the meeting.

Costa Rican President Laura Chinchilla arrived Monday night and is expected to discuss efforts to mitigate climate change and drug trafficking, AmeliaRueda.com reported. Chinchilla will deliver a speech on Tuesday, and then accept the presidency pro tempore of CELAC on behalf of Costa Rica on Wednesday.

And Monday, Brazilian President Dilma Rousseff declared “Brazil wants to be a first-order economic ally to Cuba,” at a ceremony marking the opening of a major container port, partly funded by Brazil and a major outlet for an island nation excluded from U.S. trade.

“The creation of a common political space is essential for our region,” said Castro, 82, in his opening remarks at a ceremony attended by U.N. secretary general Ban Ki-moon and heads of state from around the region.

Communist “Cuba has never had such a strong show of support from across the region,” said Arturo López-Levy at the University of Denver.

However, “the United States is not going to change (its isolationist policy toward Cuba) just because a lot of regional leaders visit Havana,” stressed Patricio Navia, a New York University political scientist.

The summit’s “Havana Declaration,” to be signed Wednesday, touches on issues ranging from combatting poverty and illiteracy to disarmament.

It urges agricultural development and food security, technological and scientific cooperation, and affirms a “zone of peace” for the 600 million people across the region. It was prepared by delegates from the attending countries during diplomatic wrangling since the weekend.