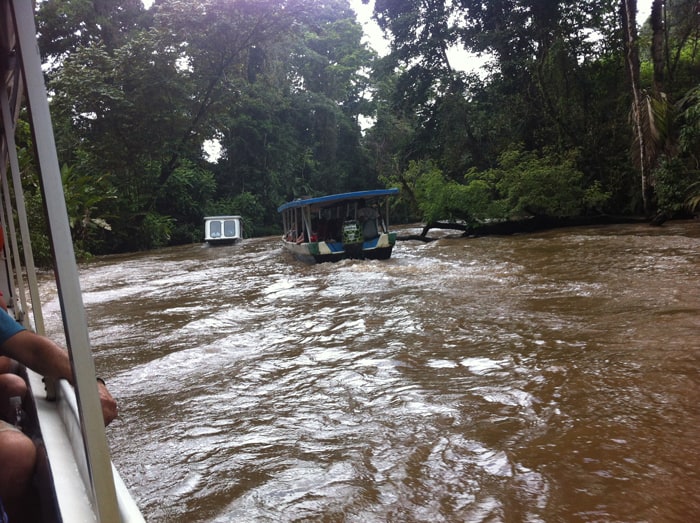 TORTUGUERO, Limón — Costa Rica always reminds me of adventure movies, and so of course Sunday’s expedition to Tortuguero brought to mind “The African Queen.”

We weren’t shot at by German warships and didn’t get covered in leeches trying to tow our boat out of the mud, but it felt like we were embarking on an exploit worthy of Bogie and Hepburn as we slalomed down the café-con-leche-colored La Suerte and Tortuguero rivers in a 33-seat boat in a light rain, with dense jungle crowding the banks.

Reachable only by plane or boat, Tortuguero is probably Costa Rica’s most remote major destination, but that wasn’t deterring hundreds of people Sunday from boarding boats to get there at La Pavona, where buses large and small were disgorging tourists by the ton for the second leg of this trip by river.

Mario Davis, our lively guide on Laguna Lodge’s shuttle from San José to the boat dock, regaled us with tales of his own adventures on the river, starting with the time the biggest crocodile he’s ever seen — an estimated 6 meters long — came racing toward the 18 people in his boat.

“I keep telling the group, ‘Be quiet, that is normal.’ Because in my inside, my feeling really was, ‘Man, this animal is really trying to eat one of us,’” said Davis, 58.

“And this animal came up to the boat like this, and when he reached it, he just sank, and you could feel it passing under the bottom, and he went on the other side of the boat and he settled down. … Everybody was kind of paralyzed. Everybody said, ‘Wow, I see this in a picture, in a movie, but never for real.’ And I said to myself, ‘Me, too.’”

I had never been to Tortuguero before, but this seemed the perfect occasion, with my sons Jordan and Nathan and Nathan’s mom, Rhona, coming to Costa Rica for a two-week visit. Brother Paul made it a party of five.

My expectations were high, and I was not disappointed. Tortuguero National Park is a vast expanse of protected rain forest, like so much of Costa Rica, but the only way to explore it is by boat. It turns out exploring Costa Rica by boat is a lot of fun, a great way to see wildlife and the easiest nature tour ever, since all you have to do is sit in a boat. For a lazy nature lover, this would be paradise.

There are budget cabinas amid the souvenir shops of Tortuguero village, but most people experience this place at an all-inclusive lodge that provides three meals a day, a couple of boat tours and transportation from San José, Arenal or Puerto Viejo.

We were glad we chose the latter, and happy with our experience at Laguna Lodge, a 112-room resort 3 km north of town. The flower-studded gardens were beautiful, the rooms basic but cozy, the food abundant and varied, the service first-class. The lodge, located on the narrow strip between the Tortuguero River and the Caribbean Sea, has a huge dining room, three bars and two swimming pools.

Speaking of swimming, Davis told us not to swim in the canal or the ocean.

“In Tortuguero, people used to swim in the canal,” he said. “Nobody swims in it anymore because six years ago a kid was eaten by a crocodile.” The ocean is not a good idea either, he said, because of bull sharks and riptides.

With two double rooms and one triple, we paid around $250 per person for two nights, including food, transportation and tours. If we provided our own transportation, the lodge was willing to take off 10 percent, but it wasn’t worth it.

“It’s nice to be a tourist,” said Paul, as we sat down to a hearty breakfast at the Selva Tropical in Guapiles after being driven there in an air-conditioned shuttle en route to the river. We decided it was a rare luxury to leave all the details to someone else and just enjoy the ride.

By 12:30 we were poolside sipping caipirinhas (not included), then off to a lunch of pollo en salsa, with an ample selection of sides and a salad bar.

At 4 o’clock Diego, one of the hotel guides, took us on a quick tour of the grounds to see “animalitos.” He opened by saying that Tortuguero is always humid, but the humidity is good for your skin, and for retaining your youthful vitality.

Diego ducked into some bushes and came back holding a red-eyed tree frog, the resplendent amphibian so often pictured on the cover of Costa Rican guidebooks. We all pulled out our cameras and phones and tried to snap our own cover photos.

By the time we’d had dinner (grilled fish in a lemon sauce), it felt like time to crash out, but our biggest adventure still lay ahead. Our package came with a canal tour tomorrow morning and an afternoon tour of the village, with extras we could do today including kayaking and a nighttime turtle tour.

We opted for the latter, and that turned out to be such an adventure I will have to write about it separately — and the morning canal tour too.

Sufficient for the day was our journey to this fabulous destination. I used to have a Russian girlfriend who expressed her love of anticipation by saying, “Waiting for vacation is better than vacation.”

I would add that journeys are often just as good as destinations. It certainly felt that way as we cruised down the river Sunday morning toward our exotic port of call.

“I felt like a tourist on a tourist boat,” Nathan said, “but I felt lucky to be seeing the same wild jungle that the locals are seeing.”