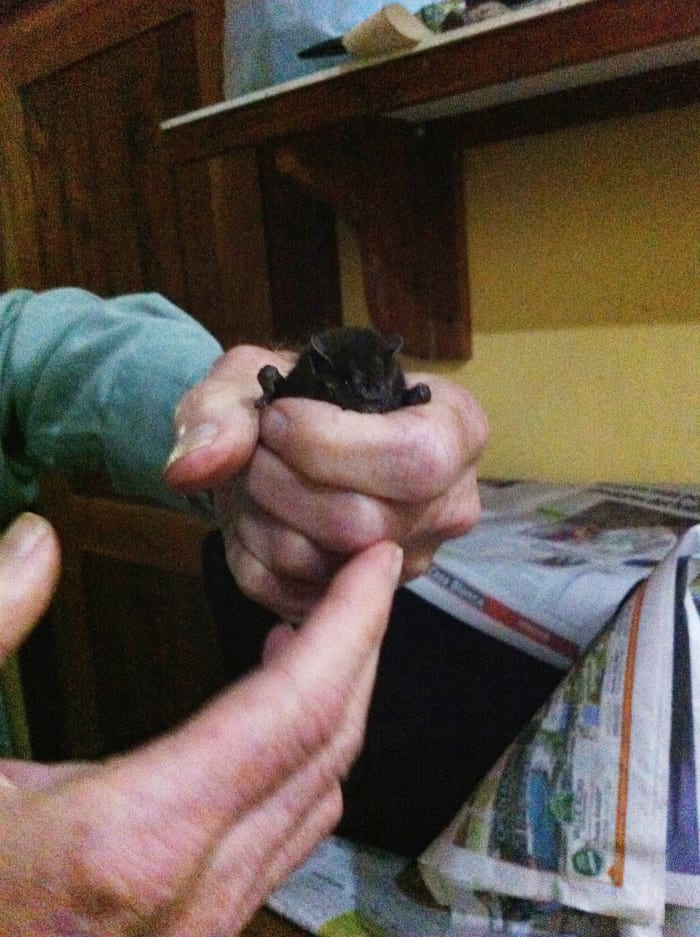 Richard LaVal, the 77-year-old proprietor of the Bat Jungle in Monteverde — a fascinating museum and a unique exhibit of live bats — can tell you about all of them.

“There may be more bats in the world than there are birds,” said LaVal, who has a Ph.D. in wildlife biology and has been studying bats for 50 years. More than half the mammal species in Costa Rica are bats — some 113 of them, he said — and last he heard there were 1,341 known species in the world, though new ones are discovered all the time.

In fact, one was named after LaVal just last year — Myotis lavali. “I had been the person who reclassified all the species of Myotis in South and Central America (in 1970), so [the discoverer] was doing it in my honor,” he said.

A sign at the entrance to the Bat Jungle poses eight true or false questions, including “Bats are in reality flying mice” and “All bats are pretty much the same.” “The question most people get wrong is this one,” he says, pointing to “Bats are blind?”

“In Western society, there’s a myth that bats are blind,” he said. “Some of them have super night vision and eyes this big. It’s something that’s highly variable. And some of them have really small eyes and can’t see very well, and then you have the opposite extreme and everything in between.”

He said a lot of older people don’t do well on this quiz. “When I was a kid, nobody knew anything about bats,” he said. “I think it was in 1944, ’45, that it was finally discovered by a friend of mine that bats have echolocation.” His friend, a student at Harvard, was carrying a bat in his hand when he walked into a physics lab with an extremely sensitive microphone that could detect high sound frequencies, and the sound of the bat’s squeaks came out of the loudspeaker. The fishing bat, very common in Costa Rica, ​can be seen over rivers and estuaries throughout the lowlands.

“They have talons and they grab fish out of the water, somewhat on the order of eagles, but eagles dive and these things troll,” LaVal said. “They’re pretty big, too.”

The common long-tongued bat is a so-called “hummingbat” that hovers in front of flowers and drinks their nectar, and is an efficient pollinator. In fact, bats are solely responsible for fertilizing agave plants, he said, so without bats there would be no tequila. So what kind of bat is most common in Costa Rica?

“Fruit bats are abundant, at least some species are,” LaVal said. “And so are insectivorous bats. We can’t actually say which are more common. There are places where there are just bats everywhere.”

If you’ve ever wondered why bats dart chaotically in all directions when they fly, it’s because they’re hunting insects, he said. Their sonar-like echolocation detects insects in flight, and the bats are able to calculate their speed and direction and intercept them, even though the insects will sense they’re being hunted and take evasive action. One of the Bat Jungle’s more unusual exhibits is a complete skeleton of a giant flying fox that LaVal obtained from a zoo, where it had died. The bones were shipped to him in a little box (“some assembly required”), and with the help of experts from the Smithsonian, he figured out how to glue them together.

Another exhibit is a gigantic pair of bat-shaped ears on the wall with tubes that you put into your own ears. LaVal then stands on the other side of the room and whispers, and you can hear everything he’s saying. The larger the ears, the better you hear. Some bats have ears as long as their bodies, he said. It was time for the main event. We grabbed flashlights and entered the live bat exhibit, where some 90 fruit- and nectar-eating bats of eight species live in a 17-meter enclosure simulating a jungle environment. Some hung from the ceiling or from branches, some hovered at the nectar feeder, some nibbled at fruit bowls and some flew around restlessly. The lights are turned off during the day to make the bats think it’s night, so they’re awake when visitors are here. It was somewhat surreal seeing so many bats so close (if behind glass), just hanging out or else darting around the enclosure on their flapping wings — without, of course, ever crashing into each other. LaVal said if he had the money, he’d love to build a vampire bat exhibit. To feed them, he said, all he’d need is a butcher to save cows’ blood. He said for a fee, visitors could even put their arm through a window and offer their own blood to the vampires.

It was hard to tell if he was joking.

Getting there: The Bat Jungle is 3 km southeast of Santa Elena on the road to Monteverde Cloud Forest Preserve, on the left across from the Tramonti Restaurant.
Hours: 9 a.m. to 7 p.m., every day. Bats are fed at 9 a.m., noon and 3 p.m.
Admission: $13 for foreigners, $11 students; $6 for Costa Rican nationals and residents, $4 for students
Phone: (506) 2645-7701
Website: http://batjungle.com
Email: thebatjungle@gmail.com