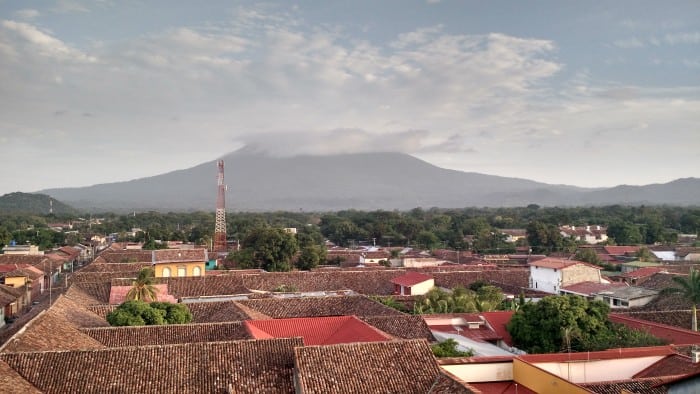 RESERVA NACIONAL VOLCAN MOMBACHO, Nicaragua – A figure with a whitish, blond coat lurked beyond the dense greenery that covers the top of Mombacho Volcano. I motioned to my tour guide, who kept walking straight ahead, and whispered: “Puma.”

The beast was getting closer to us and I noticed it was on a trail that crossed paths with ours about 50 meters ahead. I crept along as my guide Edwin Jirón maintained an unwavering pace toward the intersection. Maybe the puma will get full from eating him and I’ll get a couple of great photos, I thought.

Then, amid the cloud forest’s constant symphony of whistling birds and pattering raindrops, I heard someone speaking English. At the crossroads appeared my “puma” — a small, blond American woman in a white shirt.

I was relieved my guide’s life had been saved. But I remained distracted by the idea of seeing a puma for the first time. After all, we were walking on El Puma trail, the longest and most challenging of the three trails atop Mombacho.

There are thought to be a few pumas still living on the volcano, but because they hunt only at night, sightings are extremely rare. “None of us guides have ever seen one before,” said Jirón, who has worked on the Mombacho nature reserve for five years. “People from the café claim they have but they don’t have pictures so no one believes them.”

I assured my guide that today would be the day he sees a puma.

We soon came across an old puma cave that Jirón said had been deserted since 2000, when the trail was first created.

Fifteen years too late. So maybe we weren’t at all as close as my delusional head wanted to believe. Then again we were in the middle of a cloud forest on top of a volcano in Central America, I reminded myself, so there are other rare treasures to find besides big cats.

My quixotic journey along El Puma began just before 11 a.m. under the heavy clouds that had blocked any chance of a view from the different miradores, with a light rain that had already made a Slip ‘N Slide out of the trail’s stone slabs and wooden steps.

As just one of two cloud forests on a volcano in Nicaragua, Mombacho offers a brilliant and bustling ecosystem a mere 20 minutes from the popular colonial town of Granada. And thanks to the rainy season, there’s plenty of water to keep the lush environment thriving.

“The volcano acts like a sponge and soaks up all the moisture and rainwater,” said Jirón as we crossed a small quebrada on a hanging bridge. “But there’s times in the rainy season when there’s so much rain that it makes a river on the ravines that run down the side of the volcano.”

The stratovolcano reaches a modest altitude of 1,344 meters (4,409 feet) at its highest point, which is not reachable because of a 90-degree gradient toward the peak. To even start on one of the three trails, you have to hike four kilometers up a paved road from the volcano’s base. You can also pay $15 to have a truck at the entrance carry you or drive your own 4×4 up the volcano. On the way up you’ll pass sleepy coffee farms and long-running ziplines that are focal points of private tours.

On average, Jirón said hiking El Puma takes three hours, as the trail circles around two craters. When the forest is not blanketed in clouds, the trail offers otherworldly views of Lake Cocibolca, Las Isletas archipelago, Granada and Apoyo Lagoon.

Throughout the hike, Jirón pointed out plants and wildlife, explaining the function each one serves in balancing out the volcano’s ecosystem. There was a star-shaped fruit that falls from the trees and makes new trees from the seeds tucked in its bud. There were gooey bunches of frog eggs stuck upside down to leaves above small, man-made frog ponds, and there were giant trees that bleed poisonous milk.

“Nicaraguans call this one lengua de suegra (mother-in-law’s tongue),” he said, pointing to a set of green, tongue-shaped plants that are comically long. “We always laugh at that one.”

Besides the more than 700 species of plants, the volcano’s dense forest houses unique creatures like the Mombacho salamander, which is endemic to this area.

We came across hummingbirds, howler monkeys, and a sloth that blended into the branch of a muddied tree so expertly that he looked like a bulbous extension of the wood.

As we continued our trek up the steep incline, Jirón stopped under an opening in the forest’s leafy ceiling and looked up to the clouds racing across the sky.

“Viene Elver,” he said, setting up a vulgar but amusing way of saying that it’s about to pour.

In less than a minute, the rain became a downpour, and we were just halfway through the trail. But when you scale a volcano, you wear the dirt and rain like merit badges.

Mombacho’s last eruption is thought to have occurred in 1570, and earlier activity resulted in the formation of Las Isletas. But the volcano is still technically active. And though puma sightings are about as rare as eruptions these days, the volcano is teeming with colorful wildlife.

Toward the end of the trail I spotted some tracks carved into the mud near an abandoned building. I didn’t say anything to my guide, nor did I get close enough to examine them. They were probably just boot tracks from another hiker. But they could have been the paw prints of a puma coming back to check on its namesake trail.

The heart wants to believe.

Getting there: From Granada, you can drive 20 minutes south to Reserva Natural Volcan Mombacho or take a bus from the market, which will drop you off two kilometers from the park entrance. You can take a cheap ride from there on one of the three-wheeled carts that wait at the intersection.

Cost: I paid $5 for park admission, $17 for a Spanish-speaking guide on El Puma trail, $6 for trail access and maintenance fees, and $10 for lunch and coffee at Café Las Flores on the way down.