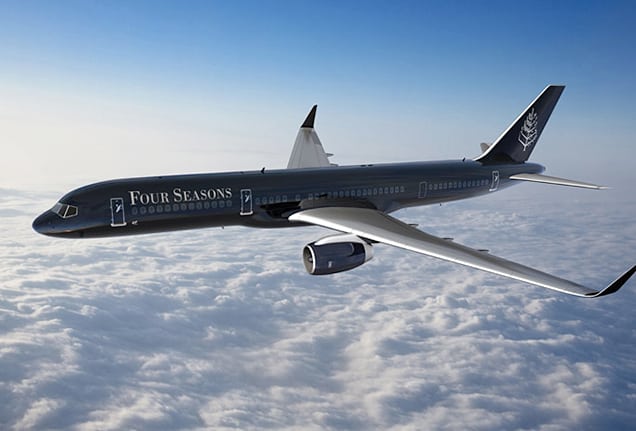 The Four Seasons is landing in Costa Rica next year.

The hotel chain is set to fly in a group of well-heeled travelers to Costa Rica in its new super-deluxe airliner in September 2016, the first time the black Four Seasons jet will land here. For once you can pass on the guaro and savor the complimentary Dom Pérignon and Petrossian caviar.

The Four Seasons’ Boeing 757 private jet was originally designed to seat 233 but has been retrofitted to accommodate 52 first-class-only seats. Bloomberg previously reported that the 52 lie-flat seats are upholstered in Iacobucci white leather and extend over 6 feet. There is one flight attendant for every seven passengers. Besides in-flight pampering from the crew, a chef and free Wi-Fi, trip coordinators will be along for the ride to set up excursions on the ground and handle all the visas and customs paperwork.

Passengers who can peel themselves away from the extravagant jet will decamp to the Four Seasons Resort at Peninsula Papagayo, Costa Rica, for three days. There they can expect “sloths as you zip-line through the forest canopy” and “indulge in a day at hot springs near Rincón de la Vieja National Park as you soak in the thermal pools and visit an organic farm” after rising “early to spot playful monkeys.” End your day with a “sunset cruise on board a private catamaran,” the hotel website says.