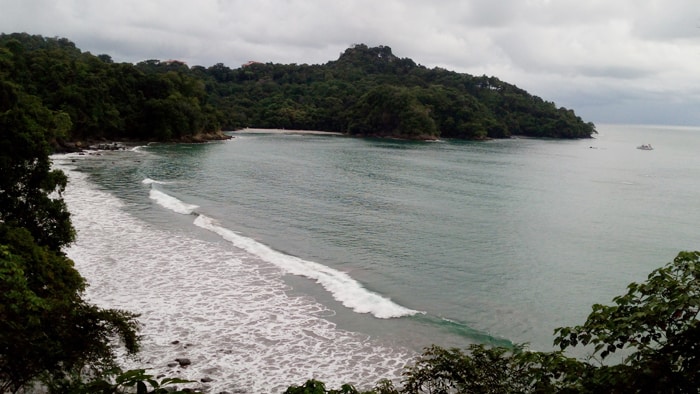 MANUEL ANTONIO, Puntarenas — I came to Playa Biesanz for a three-hour beach/mountain hike with two expert guides to see centuries-old “turtle traps” that almost nobody has ever heard of.

You may ask why turtle traps are needed, when turtles are pretty slow and easy to catch, and the answer is that these were actually fish traps that turtles sometimes also got trapped in. And if you’re picturing nets, pots, steel mesh or giant mousetraps, these traps were made of rocks.

In this series, The Tico Times Travel section takes an in-depth look at some of Costa Rica’s greatest destinations, with multiple articles exploring the attractions of each. For the first three weeks of October, we’ll visit one of Costa Rica’s finest gems, the hillside enclave of Manuel Antonio and its seaside neighbor, Quepos.

Now if you were going to make a trap out of anything, probably the last material you would choose is rocks. But the 16th-18th century Quepo indigenous group actually did.

I will explain, but first let me describe the hike I took with Maurilio Cordero and his wife, Mile (formally Milenlli Araya Masis), both of whom are ICT-certified tour guides and have already forgotten more about Costa Rican biology that I will ever know. The hike started with sunny, leafy trails and gorgeous beaches and ended up resembling a death march in the rain in the dark, with a near-detour to some ocean cliff-climbing that should be attempted only by elite rock-climbing daredevils, or perhaps leeches.

You can easily find Playa Biesanz on Waze, or just turn right off the main road in Manuel Antonio toward the El Parador Hotel. After you see the white hotel on the right called the Shana, look for a gate on the right and walk through it. Here you’ll find a trail, and Maurilio stressed that this trail and beach are public, as all beaches in Costa Rica theoretically are by law, although in practice some are more public than others. The accessibility of some beaches in Costa Rica is inversely proportional to the wealth and power of the hotels in front of them, not to mention the size of the guards at their gates.

But if you know where to go, you just walk down the trail to a beautiful seashore, and from there you hang a right onto a great nature trail. One of the first things pointed out to me were ocelot scratches on trees — trees being the rain forest equivalent of expensive couches that ordinary cats like to ruin when nobody is watching. We also saw a “two-headed butterfly,” also known as a zebra butterfly or a zebrita, that has masterfully evolved a tail that looks like a head, and a head that looks like a tail. Birds that prey on butterflies tend to grab them by the head, and this is easy because butterflies usually land on trees with their heads up. But the zebrita actually lands on trees head down, so birds often try to eat them by snatching their flimsy tails, and the butterfly breaks away and flies to safety.

“In some areas you see lots of these butterflies with their tails bitten off but still flying around,” Maurilio said. Maurilio explained to me at some length the Maritime Law, which says that within 50 meters of the high-tide mark of the ocean, no development is allowed, although in multiple places in this country, this rule is honored by being roundly ignored, and the authorities sometimes do nothing about it.

After the first 50 meters, there are 150 meters where concessions are allowed, meaning businesses with the proper permits can build things and offer services, though they cannot legally own the land.

But the problem here, Maurilio said, starts with the first 50 meters, which is often measured wrong. The 50 meters are supposed to be at a horizontal distance from the high-tide line, but in hilly areas with cliffs, like here, the vertical distance from the water is often included in the calculation.

So if you have a 50-meter vertical cliff, and a 50-meter measuring tape, and you measure from the high-tide line to the nearest place you can stand, you might conclude that you could build a 1,000-room Marriott directly above the high-water mark (if you have a concession), when it should be 50 horizontal meters further inland. To clarify these complicated issues, government officials drive big concrete markers called mojones into the ground at what is supposed to be the 50-meter line. A simple definition for mojones would be “concrete posts officially marking the Maritime Zone that are usually driven into the ground in the wrong place.” Maurilio showed me a half-dozen of these, pointing out that all of them were misplaced.

“Right there, where it’s clean, where the vegetation is all cut, that shouldn’t exist,” Maurilio said. “On nights, on Sundays, when there’s no security, they cut the vegetation.”

He went on: “From here to there, there’s 50 meters of public area. So you, and anyone in the world, can come here and nobody has the right to throw you out. It’s public.”

“The vegetation in this forest,” Maurilio said, “that’s part of our patrimonio natural.” In addition to learning about Costa Rica’s priceless natural heritage and beach zoning laws, I saw a wild coati and a fat raccoon. We visited a string of stunning beaches as we made our way along a series of increasingly steep hills that made me question my tendency to consider beer a major food group. (To balance my diet, I had also eaten a hot dog.)

We set out at 3 p.m., roughly 12 hours later than most tours start in Costa Rica, because we had to arrive at low tide to see turtle traps made of rocks. I was still eager to see these, because if I wanted a turtle I would just find one and drop a rock on its head rather than go to the trouble of building a trap.

Incidentally, along this same trail there is an annual race called the Reto MAE — “reto” is Spanish for challenge, and “MAE,” in addition to being the national salutation of Costa Rica, stands for “Manuel Antonio Extreme.” (The trail itself is called Ruta MAE.) The 10-kilometer mountain-beach race takes place in November, and last year the winner clocked in at 58 minutes. Maurilio said he came in 20th, at 1 hour and 28 minutes, and noted that this was against elite athletes. Mile laughed and said she didn’t do it. I resolved to try it this year, if possible, to see if there was any way I could distinguish myself by coming in last, but Mile indicated that she could easily beat me at that.

After a great deal of arduous hiking we finally turned around and headed back, hoping to avoid giving the wheezing newcomer a heart attack. This being late afternoon in Costa Rica, of course it started to rain, and I put my electronic devices into Maurilio’s dry bag.

For audio-visual effects there were bright flashes of lightning, and possibly the loudest thunder I’ve ever heard. For a while we walked along a rainy beach, and then we climbed a big rock and sat on top of it, and Maurilio gestured at the view.

And there was the turtle trap! In a big, perfect semicircle in front of us, there were dozens, maybe hundreds, of big rocks placed on the beach in such a way that at high tide fish (and turtles) could swim inside, but at low tide they would be trapped inside the rock wall. And it would be child’s play for the resourceful Quepo indios to spear them, fish for them, grab them with their hands or zap them with prehistoric stun guns.

I was witnessing archaeology at the beach, which is now my favorite kind of archaeology. I felt an ancient connection to the original inhabitants of this area, and in fact I felt a bit sorry for them that they couldn’t just go to a local soda and order the casado con pescado for cuatro mil.

Our adventure continued when we tried to save hiking time by returning along the beach, which involved climbing along steep cliffs pounded by furious surf. We felt confident after negotiating one rough passage, but when we came to the next it looked like it belonged on some kind of Costa Rica Mortality Index.

We were on some fairly flat rocks, but between us and the next flat place was a raging gorge of surging ocean separating us from a cliff that looked so vertical that I figured there were probably some misplaced mojones on top of it. I pointed out that if we could even cross to the cliff on the other side, we would have to be barnacles to be able to hold onto it. Maurilio stared at this possible crossing for a long time, but it looked to me like the chances of us falling into the ocean and then getting bashed against the rocks, on a scale of 1 to 10, were roughly 26. Mile, who has a 9-year-old daughter she was hoping to see again, didn’t look too confident either.

The intrepid Maurilio, perhaps thinking of my obituary (“Tico Times Writer Dies in Totally Predictable Ocean Cliff-Climbing Mishap”) decided the waves were too strong and we should turn back.

To make a long story just a little longer, by now it was very dark and very muddy and we had to negotiate treacherous uphill and downhill trails using only our sense of smell. I became grateful for all the lightning, because for a split second I could see.

Maurilio asked if I wanted one of my phones back to use for a light, but I said, “No — if I fall with a phone in my hand, I will probably break the phone first.”

We finally made it back to my car, and I drove them back to their car, and I managed to drive back to my hotel successfully. On the way I stopped at a local Super to buy the one thing I needed most at this time — beer.

Nobody in the store asked me why my shirt, pants, shoes, socks and money were completely saturated.

If they had, I would have said, “Haven’t you ever been to the turtle traps made of rocks?”

And they would have said, “Why would anyone make traps out of rocks?”