Everything evolves: A visit to INBioparque 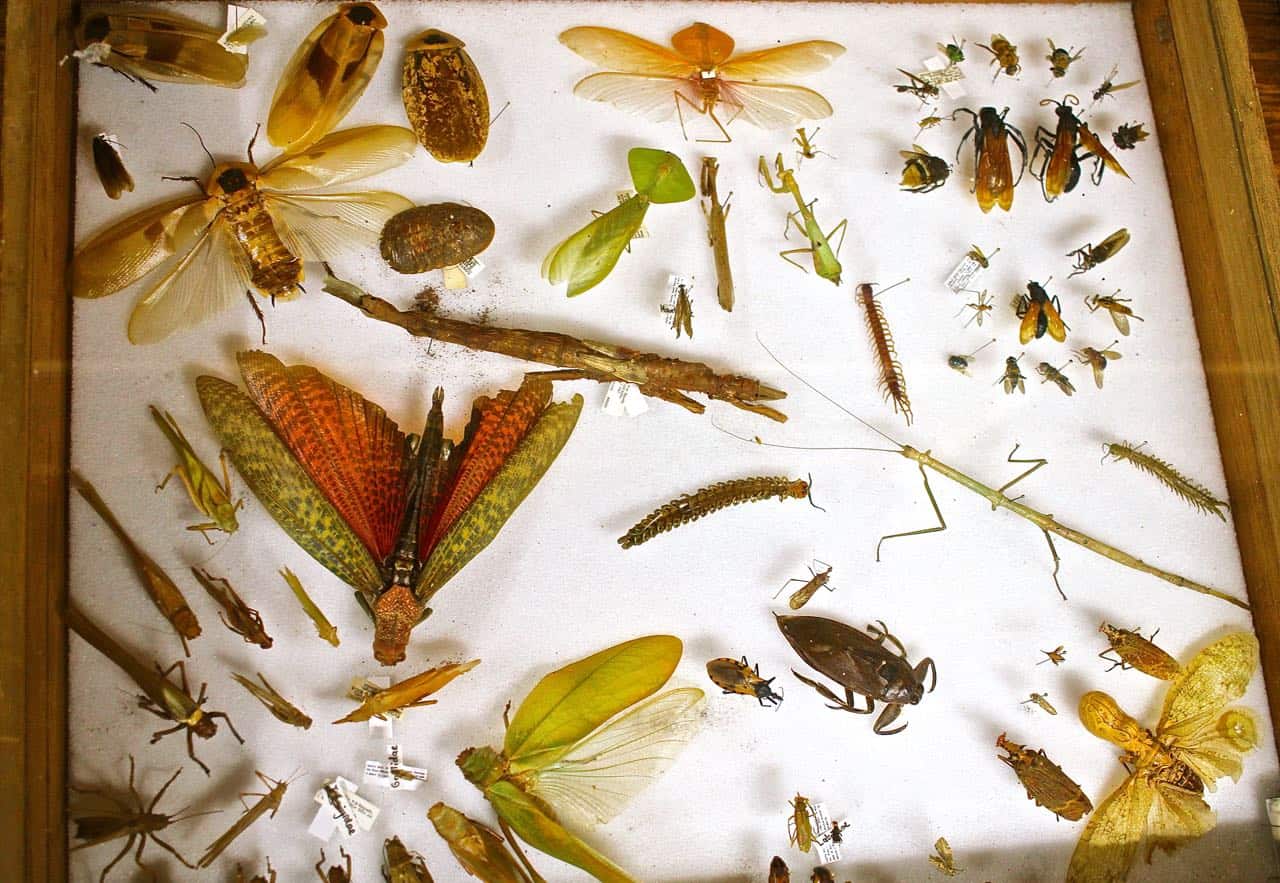 When I saw the iguana, I stopped. The thing was enormous. It was maybe the largest iguana I had ever seen. We stood three meters apart, each frozen in place. At first I thought the iguana was a sculpture, but then it shifted its head. Instead of one large eye glaring at me, two eyes now glared.

It’s harmless, I thought to myself. Iguanas are herbivores. There is no reason to be afraid. If you move, it’ll just get startled and wriggle into the bushes.

But I didn’t move. Despite all academic assurances, I couldn’t get over its size. Yes, the iguana was long, with its tail curled in a semicircle around its body, but it also possessed an enormous head, and its body looked uncomfortably bloated. Sharp spines lined its back like a row of saw teeth. Its fingers were long and skinny, gnarling into black claws. After five long minutes, I realized that the iguana had no reason to move, and I didn’t want to scare it away. It had been there first, lying near the concrete walkway in a blanket of midday sunlight. I wanted to circle the entire pond, but I could always go the other way. I turned around, took a few steps, and then found a second iguana, also lying in the path, this one nearly as large as the first.

This was my first visit to INBioparque, a private reserve in Santo Domingo de Heredia. Popularly known as “INBio,” the park opened to the public in 2000. According to its mission, INBio’s founders wanted visitors to have experiences like mine: “To offer our guests an entertaining experience in a natural theme park setting that nurtures world citizens dedicated to the conservation of our biological riches and environment.”

But INBio hasn’t attracted the following it expected. On the day of my visit, I didn’t see a single other tourist for 20 minutes. The walkways were empty. The amphitheater was vacant. I had the indoor displays all to myself. Despite the hefty admission – ₡10,000, or about $20 – INBio couldn’t stay solvent.

Were it not for a miraculous government bailout, the park would be closing in a matter of weeks. That visit would have been my last.

“Did you hear that INBio is closing?” asked Laianer, my colleague at The Tico Times.

I had never heard of it, which shocked me. I had heard of all kinds of gimmicky reserves, but not INBio. I had enjoyed my tour of the Refugio Herpetológico in Santa Ana, and I had briefly stepped into the Sloth Sanctuary on the Caribbean Coast. I had heard of Africa Safari Adventure Park in Guanacaste (hitherto known as Africa Mía). I had seen enough “butterfly forests” to know I could never get bored of them. But INBioparque had escaped my notice.

The park’s vision was fairly corporate-sounding: “To be the natural theme park with an entrepreneurial spirit aimed at self-sufficiency and commitment to innovation, quality, and excellence in services provided.” Such phrasing sounds less like John Muir and more like John Hammond, but if any country in the world should be a testing ground for this kind of business model, it’s Costa Rica.

Unfortunately, the test seems to have failed: The company couldn’t keep up with its monthly operating costs of ₡100 million ($188,000), and rumors of its closure have circulated for months. Signs point to different exhibits in InBio Park, but which direction the institution takes has not been fully mapped. Robert Isenberg/The Tico Times

When I arrived at INBioparque, I expected bleak intensity from its employees. I have worked for numerous doomed businesses, and I know how hopeless that environment can feel. But I found exactly the opposite: The parking guard smiled broadly and said “pura vida” at least 10 times. Maintenance men waved amiably. At the boletería, I bought my ticket from a beaming young woman with a fashionable haircut and glasses.

“It’s my first time here,” I said in Spanish.

“I wanted to see it now, because…” I struggled for delicate words. “I heard some bad news.”

She took only a second to understand what I meant, then closed her eyes mournfully and nodded. “Yes, it’s too bad.”

I didn’t want to pry, but I had received all kinds of mixed messages, which seemed to be changing daily. The park was mired in debts, and everyone had expected INBio to relinquish its 3.5 million biological specimens to other agencies. But the day before my visit, the National Museum promised to inherit INBio’s substantial collection, and the Environment Ministry’s National System of Conservation Areas (SINAC) pledged to take over INBio’s management. Allegedly, the place wouldn’t have to close for even a day.

“They are going to replace the staff,” said the cashier. She forced a smile, but it was clear that the moment was stressful. “So hopefully – hopefully – some of us will get to stay, but we will see in about a month.”

I unfolded my complementary map and started my slow circle of the INBio grounds. INBio’s layout clearly came from enthusiastic designers, and it encompasses every theme park idea at once: The paths cut through several gardens, each of which mimics a different kind of Costa Rican forest. The “dry forest” behaves like the woodlands of Guanacaste, while the “humid forest” has pipelines that spray the plant life with mist. Wild birds flutter through the foliage, along with colorful butterflies. There is a serpentarium (which costs extra), a geologic exhibit, and insects under glass. In the museums, glass tanks contain frogs and tarantulas. There is at least one playground, with a structure made to look like an anthropomorphic tree house. There is a petting zoo full of goats, sheep, and pigs, and kids can sign up for pony rides. In the middle of INBio stands a pond, and you can visit an underground tunnel to observe freshwater fish through plate glass. As I noted the many amusing sculptures of spiders and toucans scattered throughout INBio, a familiar thought returned to me: the poetic splendor of biodiversity. Unlike a lot of people in my demographic, I have never felt much hostility for people who reject evolution. If they believe that a cosmic force invented the universe in a few inspired days, so be it. If they claim that fire and ice blended into the frost ogre Ymir, who nursed from the teat of the divine cow Audhumla, I have no problem with that. I love a good creation story, and I often admire the people who retain their faith.

But the theory of evolution is so majestic to me, I often feel bad that those folks are missing out. After billions of years, the enormity of evolution’s timeline boggles the mind. To a writer, the patient revision of genetic traits makes perfect sense, an infinite work in progress. The cycling transformation of energy and form is far more exciting to me than a single divine blueprint, as if each creature has earned its unique coloration, its beaks or gills or wagging tails, through myriad generations. Even now, all the things we do contribute to this process. Everything we eat and say, the way we exercise and sleep, even the way we die, helps craft the next generation. To me, no sacred text has ever seemed so wondrous. In one classroom, I surveyed the jars of specimens – pickled frogs and insects – that lined the walls. Giant moths shared table space with a spider under glass. Seeing them arranged together, I can get choked up over the range of nature’s expression. It’s too bad to see an insect impaled with a pin, but such displays keep each specimen in place. You can study them for as long as you want, without the jumpy paranoia of the actual wilderness. Frozen in place, such a bestiary can seem like an art exhibit created by the universe.

The man was petite and skinny, and he literally sang these questions at me as I entered the tunnel on the edge of INBio’s pond. His voice was a light tenor, and his vibrato reverberated through the dark antechamber. The man had been pushing a wheelbarrow, but he paused to belt his operatic interrogation. All around us, fat fish puckered their mouths against the glass. “Muy bien,” I said, wondering what had prompted the singing.

“Where are you from?” he asked in a normal voice.

“Pennsylvania,” he pondered. Then his eyes widened, and he dramatically backed away. “PENNSYLVANIA!” he shrieked. “VAMPIRE!” And then he grabbed the handles of his wheelbarrow, made a long and cartoonish circle, and scampered away.

(I wish I could say this was the first time that a Costa Rican has confused Pennsylvania for Transylvania, but it has happened at least three other times.)

The moment was funny, and I wondered if the guy moonlighted as a clown – he certainly had the goofy energy for it. But throughout the park, I received the same level of upbeat engagement. Everyone I passed said in English, “Hello, how are you?” with great fervency. It was clear that nearly everyone at INBio was confidently bilingual.

“Hey, buddy,” said one staff member crouched by a pillar. “Can you see it?”

I squinted, not sure what he meant. “See it?”

He pointed upward, toward a very tall tree. “Up there. You see it?”

I looked up, into the web of branches, but I saw only gray bark and hand-shaped leaves.

“You don’t see it? Right in the middle of the highest branch? It’s one of the great symbols of our country.”

Then I saw movement, as if part of the tree was breaking away, a sentient stump sliding along the branch. It was a sloth, which gradually rotated around and inched horizontally, its head lolling sideways, as if posing for a picture. I smiled at the now-familiar sight. “He has a nest up there,” said the staff member.

I’ll call him Diego. He was a young and enthusiastic biology student at a local university. He loved nature, and he had plans to continue working in tourism for a couple years, but he also wanted to teach, preferably in the indigenous villages of Talamanca.

“It’s ironic, because Costa Rica has so much biodiversity, but it’s hard for a Costa Rican to work in research,” Diego said.

Diego was sure he would lose his job at the park, and there wasn’t much he could do about it. After the government officially takes over INBio, they will likely replace the current staff, and most of the people I saw that day will probably be terminated. Diego seemed at peace with that fate. He was graduating soon and would probably try for bigger and better things. I was grateful to hear that INBio would stay open, and the living animals wouldn’t have to be relocated. But it seemed a shame: INBio once had high aspirations. The place was quaint and even a little hokey, but it had a lot of heart. Someone had dreamed big, and that dream had ended in financial ruin. It’s a reminder that everything – even a “natural theme park” – has to evolve. As I drifted toward the exit, I passed a throng of high-school students. They were clearly North Americans, already sunburned and overwhelmed. Diego was their tour guide, and he waved as we passed each other. Then he looked up, pointing to the same tree: “Can you see it?” he said.

Then the voices grew louder. There were exclamations: “Wait, is that it? Did you see something? What is that? Is that what I think it is? You mean the thing in the middle? On the big branch? Is it moving? Oh my gosh, it’s moving!”