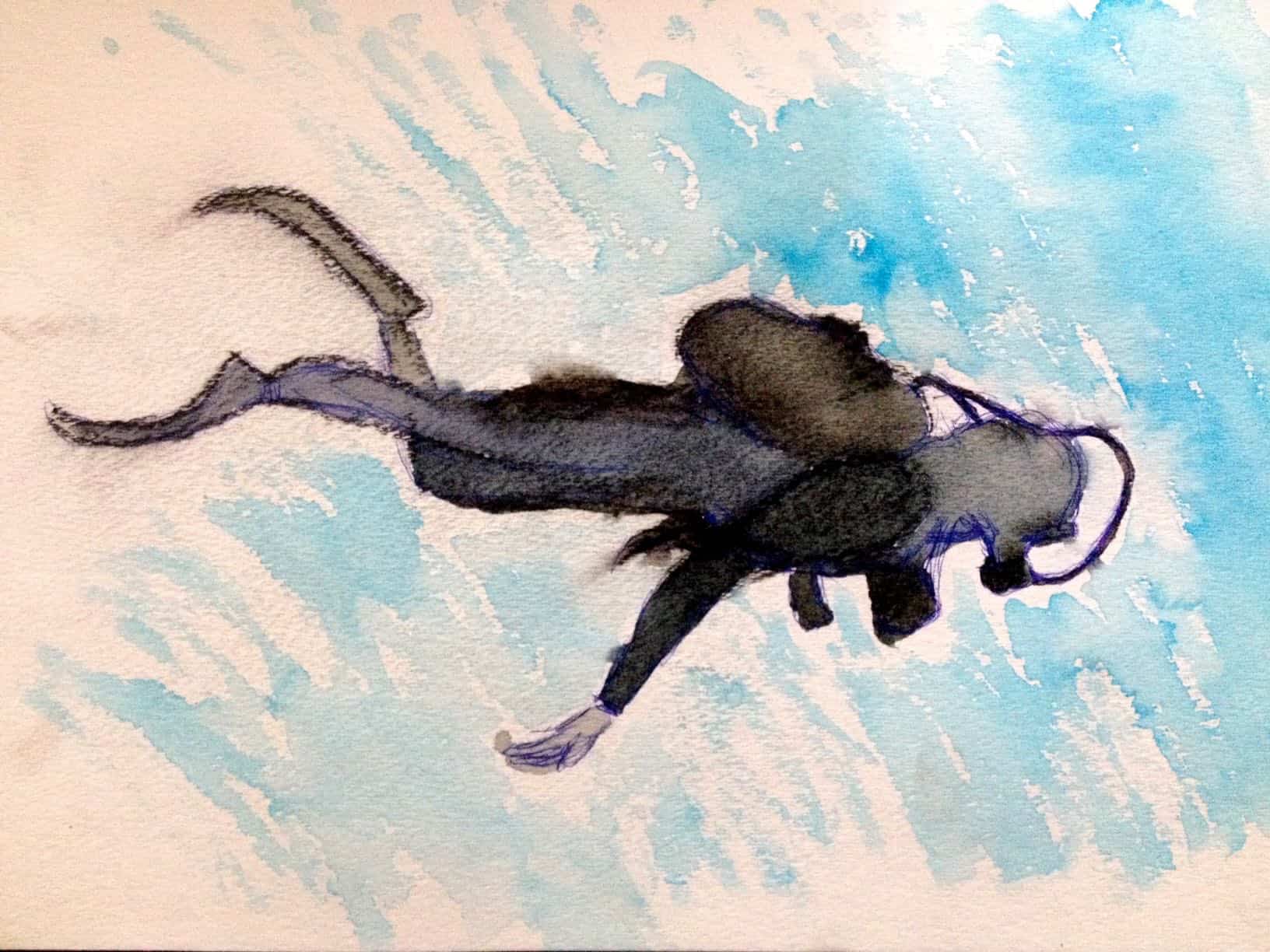 My knees pressed into the silt at the bottom of the ocean. The water was foggy and green, but I could still see Freddy in front of me, also kneeling in the murky furrows. He was a big man, whose brawny torso seemed like it might burst from the black wetsuit.

He pointed two fingers toward himself. Watch me.

Freddy clasped his regulator and drew it away from his mouth. A stream of bubbles escaped from his lips, dancing skyward. He released the tube that connected the regulator to the air tank, and it floated freely away from him.

He dropped his arm low, toward his pelvis, then reached behind his back and swept forward. With a gymnast’s ease, Freddy hooked the tube with his arm, dragged it through the water, and inserted the regulator in his mouth. His chest expanded as he took a deep breath, and then bubbles exploded around his face – exhaled into the depths, as naturally as before, as if nothing had happened.

This was an emergency tactic: If the regular ever pops out, the diver can retrieve it easily by sweeping the arm down and to the side. But to practice, you have to remove the regular – the very mouthpiece that keeps you alive – and let it disappear for a few frightening seconds.

Freddy then pointed to me with both hands. Your turn.

I had done this maneuver before, 18 months earlier. I knew how to recover an errant regulator. It wasn’t rocket science. But I also paused for a moment, because everything about this exercise is counterintuitive: I had to deliberately abandon my air supply. I had to exhale, forcing out the last air in my lungs. I couldn’t hold my breath, even though every part of my body would soon scream, Hold your breath. This is the first and most vital rule of scuba diving – never, ever, ever hold your breath. The thing you learn to do as a child, the thing you do most naturally underwater, is the very thing that can kill you. Hold your breath, and your lungs might rupture. Hold your breath, and you may never breathe again.

This is the reason many people never try scuba, this fear of doing the wrong thing while sitting at the bottom of a busy harbor, far below the fishing boats, deeper than any municipal swimming pool, deeper than any normal person could swim for more than a few seconds. For scuba divers, six or seven meters is not impressive, but for me, a fresh recruit who had only dived once before, I suddenly felt the cubic tons of water around me. Would I forget to exhale? Would I hold my breath by accident? Is this where I would meet my doom, on the cruddy ocean floor beneath a wooden dock in Panama?

I released the regulator. It vanished beyond my field of vision. I started to emit the bubbles from my mouth. Then, forcing myself to move calmly, I reached my arm back, felt the tube bounce against my forearm, and pulled the regulator toward my face. I bit down on the rubber nozzle and sucked cool oxygen into my throat.

I made the same gesture. All okay!

He then nodded and extended his palm. We shook hands in an exaggerated way, like two cartoon businessmen. It was at that moment that I wanted to smile, to laugh, but the mask obscured my face. Despite the speed at which sound travels through liquid, the human voice doesn’t translate well underwater. There was no way to express my joy.

Freddy pointed two fingers toward himself. Look at me.

Time for the next lesson: Now I would have to remove my mask completely.

“You’re never going to guess what I got you for your birthday,” said my wife Kylan. “But you’re going to love it.”

She was giddy with excitement. She could barely keep the secret, because she knew how shocked I would be. Every few hours, she would say, “I really want to tell you your birthday gift,” and then proceed not to tell me. Then, only a couple of days before we boarded a bus for the beach, she finally unveiled it: “I’m getting you a scuba lesson.”

The news hit me like a shockwave. Scuba had long been a distant dream, a vague desire that didn’t seem truly possible. I have never lived near an ocean, nor even a comfortable distance from an ocean. I loved the idea of diving, but I also loved the idea of time travel and telekinesis – for years, they all seemed equally far-fetched. Now I would finally have the chance to breathe underwater. Something that had existed only in movies would at last become real.

Kylan signed me up with Aquacenter Scuba Diving, a small outfit based in Playa Flamingo. They picked us up at our hotel in Brasilito and drove us down the dusty road to Flamingo, where I met Risky, a good-humored young Englishman who had taught diving around the world. The one-day curriculum was a “resort course,” meaning it would be quick and simple. It wouldn’t lead to certification. But that was all I needed: For all I knew, I would panic underwater, get the bends, fall into a coma, and wake up screaming in a decompression chamber. Scuba was a mysterious thing, and I had no idea whether I’d like it. If I had to abort the mission, I knew I’d rather make that decision in a shallow swimming pool than in the Pacific Ocean.

But I didn’t panic. In fact, everything went perfectly.

Getting certified in scuba is a strange thing: It takes less than a week, but for most people, spending up to five consecutive days and $500 on a hobby requires some serious consideration. There are also the incidental expenses, like hotels, food, and transport, that make scuba instruction an expensive ambition. Compared to surfing and hiking, outdoor hobbies that require only basic gear, scuba is a high-tech pastime, including masks, air tanks, and a “buoyancy compensator” – the self-inflating vest that divers don. Since I knew nothing about scuba prior to our Brasilito trip, I had never heard of a weight belt, a second stage regulator, or an “octopus.” On top of all the gear, most divers require boats, which in turn require a captain, fuel, thoughtful navigation, and decent weather.

In other words, I couldn’t just walk into a dive shop any old weekend and demand certification from the Professional Association of Diving Instructors (PADI), the globally recognized authority on all things scuba. If I wanted to earn my Open Water certificate, I would need time and money.

“You should just go down to Bocas Del Toro,” said my friend Lindsay, who is training to become a marine photographer. “I got certified with Starfleet. They’re great. And they’re cheap.”

“Yeah, Starfleet Scuba. You can get your Open Water certificate for like $250.”

The price was alarming, as was the inexplicable “Star Trek” reference. Why was it so affordable? Why should Costa Rican companies cost so much more, if the certificate was the same? When I visited their website, they claimed to certify divers in a mere three days. Was I missing something? Could I really skip down to Panama, spend a long weekend on a laidback Caribbean island, and learn this new skill in 72 hours?

Month after month, Kylan coaxed me. “Come on,” she said. “You’ll love it. Just sign up. If you don’t, you’re going to regret it forever.”

Kylan went so far as to make scuba certification my most recent birthday gift – a wondrous present, certainly, but it still required five undistracted days. Bocas Del Toro is hard to get to, so we would have to plan carefully, budgeting two entire days just to get there and back. I waffled. Months passed. Christmas came and went. Then it was the New Year.

I might have deferred the dream indefinitely, but then we found the perfect excuse: Now it was Kylan’s birthday. She didn’t want much – just a chance to escape her hectic work schedule, spend some time on a beach, maybe even get a massage. She wanted good food and some cold beer. She wanted a few days of total relaxation and she didn’t want to plan a thing.

“Let’s just celebrate both birthdays at the same time,” I suggested. “I’ll get scuba certified, you’ll get Bocas Del Toro.”

And so, in late March, at the height of the Costa Rican dry season, we boarded a bus for Sixaola. At long last, we were headed for the Panamanian border. And if all went well, my submarine ambitions would finally be realized.

As long as I didn’t hold my breath.

Robert Isenberg is a staff writer for The Tico Times. His new book, “The Green Season,” will be available soon. Visit him at robertisenberg.net.