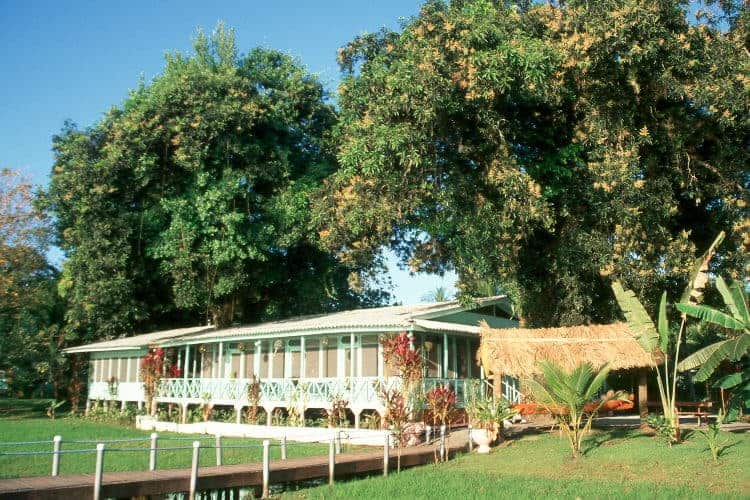 In September, 1998, an erstwhile collection of self-proclaimed fishing enthusiasts congregated in the extreme northeast corner of Costa Rica, just south from the southeastern Nicaragua border.

Also along was Max Gomez, a longtime pal of Jonathan’s and a sometime resident of Costa Rica who was the local organizer of this foray into tarpon land.

It should be noted here being a fishing enthusiast doesn’t necessarily mean you have recurring rem dreams of the Silver King (tarpon) on the other end of that pole in your mitts; rather, the camaraderie of just being along for the experience and friendship was important enough to be a member of the group.

We fished out of the Casa Mar Lodge, about 30 minutes north by johnboat from the haloed fishing grounds where the Rio Colorado meets the Caribbean Sea. The Lodge was owned and managed by Billy Barnes. Max  knew Billy and could attest to his mantra of the customer being first and foremost.

Casa Mar was first class fishing camp luxury. There was always food available if we needed it (which we didn’t). The dining room area was large enough with elbow room at each table for nourishment, story-telling and preferred fishing gear comparisons. A smorgasbord buffet was provided during the mid-day break (no box lunches) and dinners were a bit more formal.

The “Great Room” was spacious, able to comfortably accommodate all of the guests, with tables and a big screen TV for evening entertainment. The bunkhouses located nearby were set up to each comfortably hold two guests, with all the amenities you would expect to find at a Motel 6 where Tom Bodett was leaving the lights on. During the day, Billy would quietly “broadcast” outside a selection of soothing elevator music.

And most importantly, there was always (24/7) cold beer (and assorted other beverages) readily available on a self-serve basis.

The daily fishing gig would be as follows: Fishing two with a local guide in each johnboat and weather permitting (which it did for us), we would head out on the Rio Colorado east in the mid-morning, upstream past the last Costa Rican police outpost before the Rio Colorado became the Rio San Juan in Nicaragua, past where the river splits around a swampy island, and then to where the river meets the Caribbean Sea.

We would venture out no more than a mile or so to where the Silver Kings would mostly be. After a couple of hours, we would head back to camp for some vittles, conversation and to avoid the mid-day sun.

Some of us would decide to take an afternoon “camaraderie break.”  Al did so, and could be found napping in a hammock from what he considered to already be a hard day’s work (which didn’t necessarily include fishing). His theme song was “Sleepy Time Gal” which Billy would provide on cue.

In the afternoon, the rest of us fishing would repeat the morning route around 3PM, returning a few hours later.

The first two days of fishing were relatively unexciting – yes, we caught a few tarpon and enjoyed the scenery and camaraderie.

On Saturday morning, our last day, our guides told us they had a feeling of a “Sabado mas productivo” (more productive Saturday)! Well, that afternoon became a whole- out war between man and fish as we happened onto a large school of tarpon – it seemed as if every one of us had one on at the same time.

Below is a photo of T Clark and me grappling with our adversaries. This war went into overtime and we didn’t make it back to camp until after 7PM. 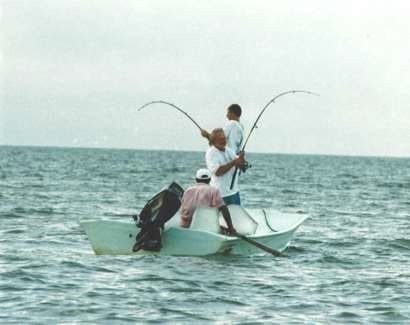 Even though we followed “catch and release” guidelines, T’s and my johnboat was the last to land a nice size Jack Crevalle. Our guide told us he was towing it back to his barrio for his family and neighbors to enjoy an evening’s banquette. This took us some additional time but gave us a chance to meet some of his barrio residents.

Needless to say, Saturday night was high energy! Seems like we were up late into the night with exaggerated reminiscences and one-upmanship joke telling. What a way to end a trip for the ages – and a Sabado Gigante!