Our very busy sloth nursery here at the Toucan Rescue Ranch continues to grow, practically on a weekly basis.

The tiny, newly orphaned babies of various ages arrive scared and confused, having just lost their mothers — mostly due to dog attacks, electrocution by power lines, and in some cases being hit by cars. This is the beginning of a completely new journey for them, but one that in the majority of cases, will still lead to life back in the jungle once they are old enough.

Here at our headquarters near San Isidro de Heredia, most of the orphans in our Saving Sloths Together release program are Hoffman’s Two-toed Sloths (which we refer to as two-fingered due to their having three toes on their back legs and two fingers on their front legs or arms). This species of sloth is more common in this area, most likely due to our higher elevation and cooler temperatures. These sloths are not as well-known by the general public as the other type of sloth found in Costa Rica, the very popular three-toed sloth, (referred to in this article as three-fingered, since they have three fingers in the front). On rare occasions, we receive one of these very enigmatic creatures, and it becomes fairly obvious why they have captured the attention of sloth lovers around the world.

Luna, a three-fingered sloth, arrived on the evening of a full moon this last December. Her mother had fallen out of a tree and onto the road, and a passing driver, unable to stop in time, hit the fallen sloth. When they pulled over to see the extent of her injuries, they found that she had not survived, but miraculously her very young baby sloth still clinging to her had survived the terrible ordeal. MINAE (the Environment and Energy Ministry) was called, and they then contacted Toucan Rescue Ranch so that our founder, Leslie Howle, and our veterinary staff, could prepare to receive the tiny survivor. 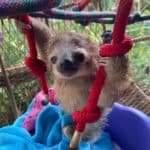 Upon arrival, the young patient was whisked to our veterinary clinic and given a thorough examination that revealed that she was in great shape, except for a concerning injury to her right eye. After her exam, she was rewrapped in warm blankets to start the next critical phase of her journey, involving getting her accustomed to her new strange surroundings and more importantly, coaxing her to eat.

Three-fingered sloths have the slowest metabolism of any warm-blooded animal, which also means having a very slow rate of digestion. This allows them the “luxury” of only having to climb down to the forest floor to go to the bathroom once every 8-14 days or longer. This is one of the many adaptations sloths have developed over the years that help them remain hidden high in the tree canopy, avoiding detection by predators. It is much more energy-efficient to be virtually invisible to predators, rather than having to expend great amounts of energy outrunning them.

Another piece of this fascinating puzzle is that three-fingered sloths only eat leaves and fruiting bodies of certain trees, with the Guaraumo or Cecropia trees, found throughout Costa Rica, being their preferred tree of choice. With that in mind, this very limited diet presents a challenge to a tiny sloth’s new human surrogate mother.

Luna has proved to be a wonderful little addition to our nursery. We could not have asked for a more perfect baby. From the very beginning, she happily and heartily accepted the goat milk and leaves we offered her, which was a big relief, as she was only slightly over 400 grams. We were surprised to discover after various cecropia leaves were offered to her that she prefers the older thicker leaves to the softer more pliable ones. Sloths develop their individual food preferences based upon what their mothers eat and introduce to their offspring, and once we figured out her preference, we were happy to oblige.

Concerned about the injury to her eye, we brought in an ophthalmologist who determined that she has lost all sight in that particular eye and that the damage is permanent. The good news is that that doesn’t deter Luna in any way, and it will fortunately not prevent her from being returned to the wild when she is old enough.

She goes potty willingly (another major hurdle at times), especially when placed in a patch of dirt, where she backs up, moves her short stubby tail back and forth, creating a small crater. She closes her eyes tightly as she settles in to do her business. This is a typical sloth behavior when they are urinating. As with other sloths, she then opens her eyes and starts climbing upward, as she finishes depositing a small pile of poo that resembles tiny round pellets.

Behavior-wise, she is also exhibiting typical three-fingered sloth behavior, which is the strong drive to cling and climb. Now, at a little over 500 grams, she loves to be on the go when she’s not napping. We place her tub in a hanging wicker chair on the partially sunny porch and she spends her days climbing the crisscrossing ropes, voraciously eating the cecropia leaves that surround her, and climbing back into her tub to catch a few Zzzz’s in the warm sun and soft nest of blankets. Pura Vida!

With her wonderful attitude and amazing spirit, we enjoy watching her thrive in our sloth preschool, the first stage of four stages for the young orphaned sloths. As with all of the babies, both two-fingered and three-fingered, we look forward to the day that she moves on to the final stage before graduation, our “Sloth University” located at our release site in Sarapiquí, Costa Rica.

Next step: the big, wide world!

— Denise Gillen is a volunteer with Toucan Rescue Ranch.

The Tico Times
Share
Facebook
Twitter
WhatsApp
Email
Previous articleUber announces end of services in Colombia
Next articleReview: Avianca Airbus A320 and A321 between Colombia and Costa Rica