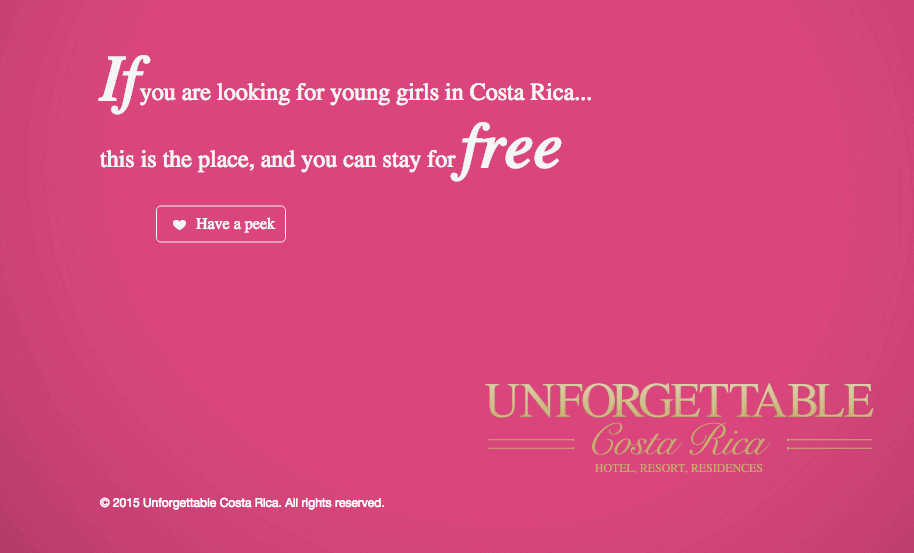 The campaign “Unforgettable Costa Rica” consists of a website that in the past four months has been promoted in dating websites and sex forums using fake accounts. Posts and messages invite users to visit the website to find “the youngest girls,” aiming to attract sex predators.

Clicking on one of these links takes the person to a website that looks like a conventional hotel or travel site displaying usual links to accommodations, dining & nightlife, spa & wellness, and others including one of “Meet the girls.”

The links display images of a prison with messages warning that people engaging in sexual activities with minors will be prosecuted, and that a sex trip to Costa Rica could end up in prison sentences if they pay for sex with underage persons.

PANIAMOR Executive Director Milena Grillo said efforts to promote the website were conducted site-by-site, creating fake user accounts to post messages with invitations to visit the site. The goal is to inform as many people as possible that engaging in sexual relations with people under 18 is a crime in Costa Rica, she said.

“It is important for people to know that it is a crime that is punished with prison sentences here,” Chacón said.

One of the campaign’s most important features is that the website records visitors’ information, and officials on Wednesday reported it has received visits from more than 100 countries.

“This is actually a very troubling statistic as it shows that interests in sex with underage people spreads worldwide,” the vice president said.

Geographic and other information of people accessing the website will be used to profile sex predators searching for information about underage sex in Costa Rica. Data also will be used to design strategies to fight sex tourism and will be sent to government agencies at all of the country’s detected.

“If we want to keep Costa Rica as a place that is worth visiting, we need to eradicate those who come here for the wrong reasons,” Chacón said.

The guerilla marketing campaign was developed by local ad agency Garnier/BBDO and also has the support of the Costa Rica Tourism Board and National Tourism Chamber.

Some 450 local tourism businesses committed to support the fight against child sexual exploitation and starting Thursday they are promoting the campaign on their websites and among their clients.