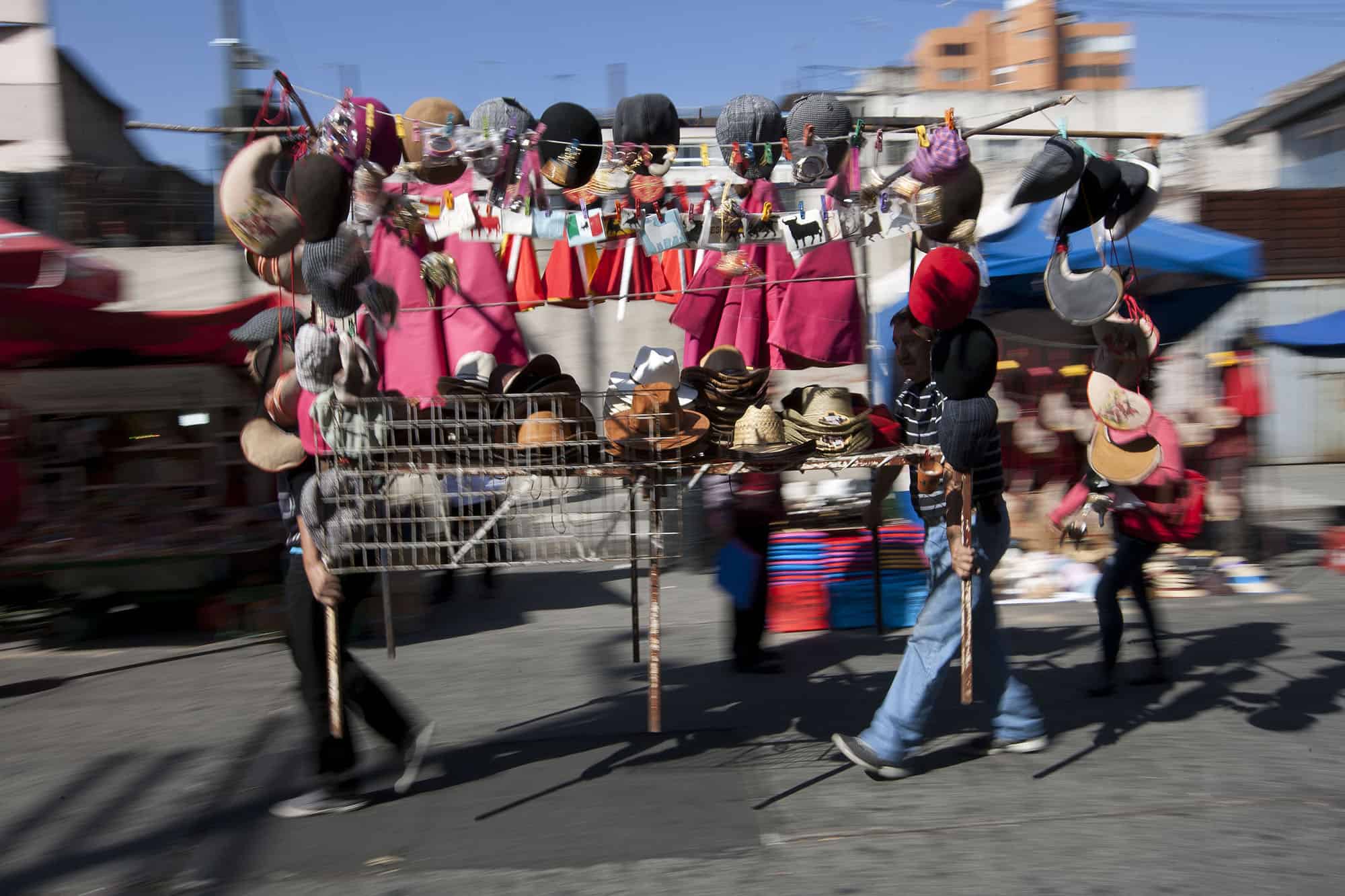 Street vendors outside the Plaza México in Mexico City in 2012. Even though Mexico’s 3 percent growth rate is the slowest in the Pacific Alliance this year, it will outpace Brazil’s 1.8 percent, the fastest pace among Latin American nations on the Atlantic. (Bloomberg News photo by Susana González)

BRASILIA, Brazil – The end of a decade-long boom driven by cheap money and strong commodity prices has deeply divided Latin America between fast-growth countries along the Pacific coast and stragglers on the Atlantic.

Venezuela, Brazil and Argentina, which make up 98 percent of the combined economies of the Mercosur trade bloc, will grow an average of 0.6 percent this year, according to the International Monetary Fund’s latest World Economic Outlook. Chile, Peru, Colombia and Mexico, which formed the Pacific Alliance trade group in 2011, will grow 4.2 percent.

The divide has little to do with western Latin America facing a dynamic Asia and China or the eastern region’s exposure to a Europe still recovering from crisis. The countries faring better have opened their economies, adopted market-friendly policies and generate more productivity and investment prospects, said Ramon Aracena, chief Latin America economist at the Washington-based Institute of International Finance, or IIF.

“Some countries partied and splurged during the boom years, others did their homework,” Aracena said in an interview in Bahia, Brazil. “Latin America is no longer a unified block with a synchronized business cycle.”

Atlantic countries spent more, including on subsidies and social welfare, while saving and investing less. In Brazil, current spending is double the Latin American average and domestic savings are 16.4 percent of gross domestic product, compared with 20.8 percent in the Alliance countries, according to an April report by Goldman Sachs.

Investors and rating companies are taking note. Moody’s Investors Service raised Mexico’s credit rating to A3 in February, four levels above junk. A month later, Standard and Poor’s downgraded Brazil to BBB-, the lowest investment grade, a move that was partially anticipated by investors and left bond yields little changed.

Even though Mexico’s 3 percent growth rate is the slowest in the Pacific Alliance this year, it will outpace Brazil’s 1.8 percent, the fastest pace among the Atlantic group.

Direct equity-investment inflows, the IIF’s measure of foreign-direct investment, rose to 2.8 percent of GDP in 2013 for the Pacific nations from 2.1 percent a decade earlier. In Brazil, the level rose to 1.9 percent from 1.7 percent, while dropping in Venezuela and Argentina to 1 percent from 1.8 percent.

Examples abound in the Atlantic countries where a heavy government hand in capping prices and taxing capital or trade flows has squeezed profits, reduced investments or crimped demand.

The Argentine government in December slapped a 50 percent tax on foreign autos with a pretax value of more than 210,000 pesos ($26,021) to slow a drain on international reserves, which hover near a seven-year low. That came on top of a 19 percent devaluation of the peso in January that caused consumer prices to surge. Car sales fell 40 percent in April from a year earlier to 51,346 units, according to the Argentine Automakers Association.

“This month we haven’t sold anything, and last month we sold very little,” said Tomás Herrera, owner of a dealership in Buenos Aires that specialized in luxury cars and now handles cheaper models. A worker stands in a lift during construction at Galeão International Airport in Rio de Janeiro. Brazil has tendered some contracts to build and operate select airports, roads and ports, yet its drive to improve infrastructure has been insufficient and heavily state-financed, a Goldman Sachs analyst says. Bloomberg News photo by Dado Galdieri

Price fixing and more than a decade of nationalization in Venezuela have cut private investment to increase capacity and productivity. The world’s highest inflation, at 59.3 percent, has eroded consumer demand and also helped spark violent street protests that killed at least 42 people since February.

Amid “distortionary” policies, Venezuela’s economy will stagnate this year, the IMF said in an April 24 report, compared with Latin America growth of 2.5 percent.

Brazil has tendered some contracts to construct and operate select airports, roads and ports. Yet its drive to improve infrastructure has been insufficient and heavily state-financed, Alberto Ramos, chief Latin America economist at Goldman Sachs, said by phone. Red tape has delayed some projects, while fuel-price caps prompted a decline in revenue and shares for state-run oil company Petroleo Brasileiro.

“The government is seen by business as excessively interventionist,” said Carlos Kawall, chief economist at São Paulo-based Banco J. Safra SA. “There is no trust or confidence.”

Brazil places 116th out of 189 countries in the World Bank’s ranking on the ease of doing business, with companies spending 2,600 hours per year to deal with taxes versus 369 in the rest of Latin America. Addressing such issues and tackling inflation with tighter fiscal policy could allow Brazil to join the region’s high-growth camp, according to Augusto de la Torre, the World Bank’s chief Latin America economist.

“With some consensus on structural reform, I am very optimistic on Brazil in the long run,” he said.

While Brazil invests less than many of its neighbors, it pulled 36 million people out of extreme poverty in the past decade with growing employment and expanded social welfare such as the Bolsa Familia cash-transfer program, government data show.

On the Pacific coast, new trade deals for Peru with the U.S., European Union and China, as well as tenders for private companies to build and operate infrastructure, are bolstering growth prospects, particularly in shipping.

“Peru is pretty entrepreneurial at the moment,” said Gerard van den Heuvel, chief executive officer at DP World Callao, which handles more than 70 percent of Peru’s container shipments. The unit of the Dubai-based company wants to expand to keep up with annual growth rates of 5 percent to 6 percent, he added.

In Mexico, companies are racing to invest in the country’s energy industry even before lawmakers vote as early as June on final legislation to end a 76-year state oil monopoly. The government of President Enrique Peña Nieto aims for initial contracts for private drillers operating without state-run Petroleos Mexicanos to be awarded by mid-2015. Bank of America estimates the legislation could boost foreign investment by as much as $20 billion a year.

An overhaul of labor, energy, banking and fiscal laws will boost the country’s potential growth rate to 5.5 percent as of 2016, said Gabriel Casillas, chief economist at Grupo Financiero Banorte. “We’re optimistic about Mexico.”

The Alliance strives to lower internal and external tariffs. Mercosur, short for southern market in Spanish, is a customs union that includes Paraguay and Uruguay, has a common external tariff and negotiates trade agreements in unison.

Trade averages 54.4 percent of GDP in the Alliance nations, which have between 42 and 52 free-trade partners, compared with 40.7 percent in Venezuela and Argentina and 24 percent in Brazil, which have fewer than 10 partners.

The outward-looking and market-oriented nature of the Pacific Alliance make it poised to play a significant role in regional and global trade, the Atlantic Council said in a report released today.

Colombia-based Modamar, whose branded SAHA swimwear sales are growing between 15 percent and 20 percent annually, clears customs faster than Brazilian rivals through agreements with the U.S. and Europe. It also pays lower tariffs on imported European Lycra as well as finished products it sells from Los Angeles to Paris. It had revenue of $700,000 in 2013.

“We’re more competitive and Colombia is gaining that fame that Brazil used to have for these kind of products worldwide,” said Carlos Laverde, who co-founded the company in 2006.

The region’s two-track growth probably will continue for the foreseeable future, as the Atlantic countries struggle to boost investments and any possible policy changes take time to generate confidence, Rees said.

Investments in the Pacific countries were 22.9 percent of GDP in the four quarters through September 2013, versus 20.6 percent in Venezuela and Argentina, and 18.3 percent in Brazil, according to the IIF.

The scope for monetary and fiscal policy response in the face of slowing growth is limited in Atlantic-facing countries, where rising government spending has fueled inflation. Consumer- price increases in Brazil have been above the 4.5 percent target for four consecutive years and will reach 25 percent this year in Argentina.

Argentina has raised borrowing costs, although they’re still below inflation. In Brazil, which is growing at a quarter of its 2010 rate, policy makers have implemented the longest tightening cycle of any major economy.

Inflation averaged 2.6 percent in Colombia, Mexico, Chile and Peru last year and all cut interest rates through the end of December, although Colombia began raising in April as its economy accelerates.

Some countries are better placed than others to combat stiffer headwinds that include lower commodity prices and increasing borrowing costs, said IIF Managing Director Charles Collyns. “The Pacific countries have better institutions and policy frameworks to drive and diversify their economies.”

With assistance from Charlie Devereux in Buenos Aires, Matthew Bristow in Bogota and Eric Martin in Mexico City.