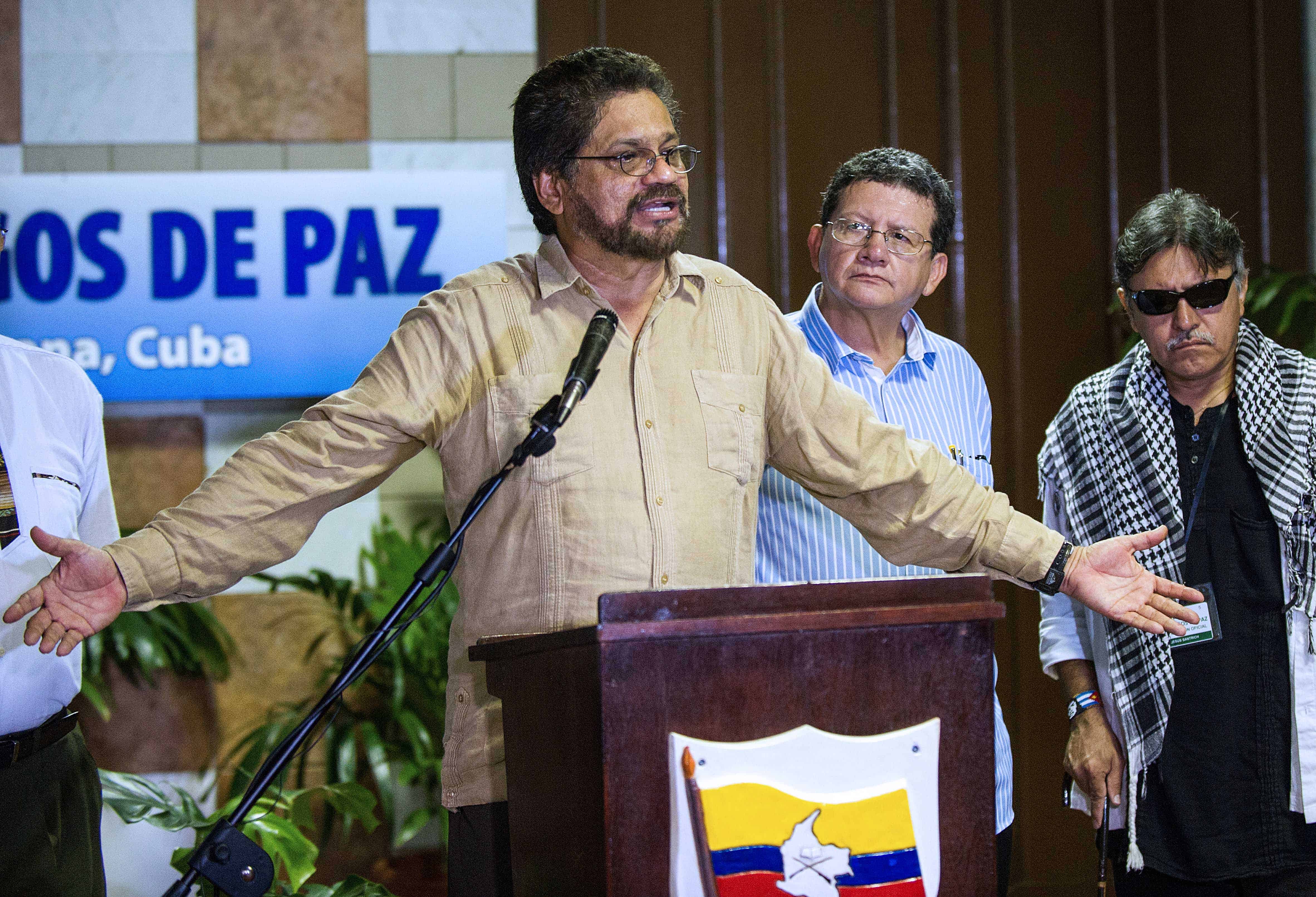 FARC-EP commander Iván Márquez, left, reads a statement next to commanders Pablo Catatumbo, center, and Jesús Santrich at the Convention Palace in Havana during peace talks with the Colombian government on May 16, 2014. (Yamil Lage/AFP)

WASHINGTON, D.C. – With Colombia’s May 25 presidential elections only a week away, it appears that Marxist rebels have reached a landmark accord with the government of President Juan Manuel Santos to cooperate in the fight against drug trafficking.

The deal – now being negotiated by both parties in Cuba – could give Santos a badly needed boost in his bid to hold onto the presidency, say experts meeting Tuesday at a Washington event to discuss the ongoing peace talks. Its main points include programs to substitute illegal crops as well as public health initiatives to prevent drug use.

The conference, titled “Drug Trafficking and the Peace Process in Colombia,” attracted more than 100 people to the Woodrow Wilson Center and was co-sponsored by Fundación Ideas para la Paz, a Bogotá-based think tank.

Bruce Bagley, a University of Miami scholar who specializes in Latin American affairs, said aggressive spraying and fumigation efforts by the Bogotá government have forced Colombian cocaine production down while production is rising in neighboring Peru. Today, the two Andean nations are roughly on par, he said, with each accounting for about 44 percent of world production; Bolivia produces the remaining 12 percent.

That’s a sharp reversal from 2005, when Colombia grew an estimated 90 percent of the world’s coca leaves.

Much of Colombia’s cocaine production is controlled by the Fuerzas Armadas Revolucionarias de Colombia (FARC), a guerrilla group that’s been battling the Bogotá government for 50 years. Peace talks that began in 2012 seek a negotiated end to the FARC insurgency, which has cost more than 200,000 lives since fighting began in 1964.

“The FARC has been involved in cocaine trafficking since the early 1980s. They’ve been able to use this as an important source of financing, and they continue to do so today,” he said, estimating that the FARC earns $300 million a year from cocaine smuggling. “For them to give it up will be very tough. It’s a question of life and death.”

Bagley added: “In my opinion, the FARC leadership is ready to exit the drug trade, but they’re negotiating very hard for things like alternative development programs, technical assistance, access to credit, clinics, schools and other things. This is going to be an expensive proposition.” Angélica Durán Martínez, a political science professor at the University of Massachusetts-Lowell, argues for decriminalization during a Washington conference Thursday on drug trafficking and the peace process in Colombia. Larry Luxner/The Tico Times

Bagley said there are now six or seven “bandas criminales” (criminal gangs), also known as “bacrim” groups, led by the Urabeños and the Rastrojos, in key parts of Colombia and all along the Pacific coast.

“This restructuring of organized crime – pushed in part by the ‘reverse cockroach effect’ – has beset Central America and Colombia once again,” he warned. “I don’t think U.S. authorities have paid enough attention to this. The Urabeños may soon rival the power of the Medellín cartel.”

This is why, he said, “overall, the FARC would like to get out of this business, because they see that drugs are financing their principal enemies.”

Within Colombia, the biggest drops over that time period occurred in the Orinoco region (down 45 percent), followed by Meta-Guaviare (down 34 percent), the Pacific (down 29 percent) and Putumayo-Caqueta (down 26 percent). But neighboring Peru has picked up the slack, meaning overall worldwide production of cocaine is relatively stable.

“Cocaine demand in Europe has increased dramatically, and Europeans pay two to three times as much per gram as do Americans. There’s also been a dramatic increase in South American consumption, particularly in Brazil, the number two cocaine consuming country in the world. Argentina is number three, and Spain is four. Twenty years ago, neither Brazil nor Argentina even figured on the radar,” Bagley said. “The old argument that cocaine consumption is an American disease is incorrect. The decline in U.S. consumption has been more than compensated by a rise in Europe and South America.”

Gaviría, the reporter from El Espectador, estimated that 62,000 Colombian families live from coca production, which is concentrated in 10 municipalities that together account for about 47 percent of national cocaine production. In addition, polls show that about 80 percent of those families say they want to get out of the business.

But when Colombia is compared to Peru, he said, it’s clear which country has paid a higher price in terms of bloodshed.

“Peru has somehow overtaken Colombia [in cocaine production], yet Peru still has a homicide rate of only 8 per 100,000 inhabitants, while in Colombia it’s 35 per 100,000,” Gaviría said. “They are waging a low-intensity war against the drug traffickers. Maybe we should have chosen that low-intensity war like Peru did.” Durán Martínez, whose research on organized crime, violence and drug trafficking in Mexico and Colombia received funding from the U.S. Institute of Peace and other organizations, praised the likelihood of a drug trafficking accord between the Colombian government and FARC.

But she also called for the decriminalization of marijuana as well as the legalization of coca.

“I think decriminalizing the weakest links of the drug trafficking chain is a step in the right direction, but it’s not going to solve the drug trafficking problem or eliminate coca production in Colombia,” she said, adding that fumigation efforts have frustrated rural farmers who already don’t trust their own government.

“For alternative development projects to succeed, fumigation has to stop. Rural areas are in a very difficult situation right now, and the crisis is very deep,” she said. “And even if the process of rural development is successful, it’s unlikely to lead to an elimination of the coca crop. There are many other actors engaged in drug trafficking [besides the FARC], so this agreement is likely to have a limited impact.”

The agreement on illegal drugs is the third of six agenda points agreed by FARC and government negotiators in Havana. Other accords cover agrarian reform and political participation. Still up for discussion: how to compensate victims of the 50-year conflict and how to implement the deals.

Santos, who is running for re-election, faces stiff opposition from candidate Óscar Iván Zuluaga – an ally of former President Álvaro Uribe. Zuluaga, who according to polls is running neck-and-neck with Santos, demands a unilateral ceasefire from FARC before talking with the rebels, and strongly opposes any deal granting the guerrillas impunity for their crimes.

Rafael Guarín, former vice minister of defense, argued that it makes perfect sense to negotiate an accord on drug trafficking with the FARC, “because it is precisely the FARC which broadly controls the growing areas. And in border areas with Venezuela and Ecuador, they control the processing of coca. Based on this, the peace process cannot be understood as a simple demobilization.”

But Guarín – echoing Zuluaga’s stance – warned against giving FARC rebels a blanket amnesty or allowing them to participate in politics.

“This would mean the legalization of drug trafficking,” said the former defense official. “It would be very serious if we sign an accord that includes demobilization, with a constitutional clause leaving the door open for the state to relinquish criminal prosecution of drug traffickers. What kind of message does this send?”