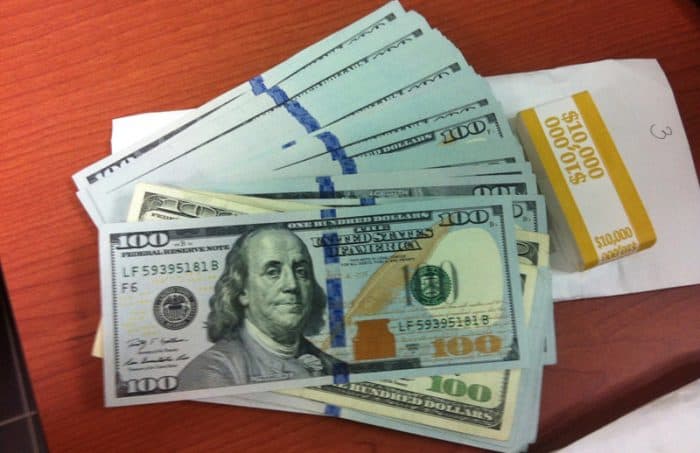 Police arrest Costa Rica-bound US family for smuggling $45,000 in suitcases

This is what half a million dollars looks like

Part of the half a million in U.S. dollars found by National Police in a car Wednesday morning, Feb. 26, 2104. (Courtesy Public Security Ministry)

National Police discovered a whopping $552,000 in neatly wrapped $100 bills early Wednesday after they pulled over a white Mercedes Benz.

The money mule, caught on Route 32 near Río Frío, Sarapiquí, was reportedly nervous, telling officers he was in a hurry and urging them to let him go. Police searched the car suspecting drugs when they found the cash bundled under the driver’s seat, according to the daily La Nación.

Sensing his impending arrest and the bags of cash at hand, the driver allegedly tried, unsuccessfully, to bribe the officers. The Criminal Court of Pococí gave the suspect three months preventative detention for alleged money laundering.

“This is a clear strike against drug traffickers where it hurts, their money,” said Public Security Minister Mario Zamora in a Facebook video posted by the ministry.

Skip 40 seconds into the video see what more than a half a million in Benjamins looks like. Less than you expected?