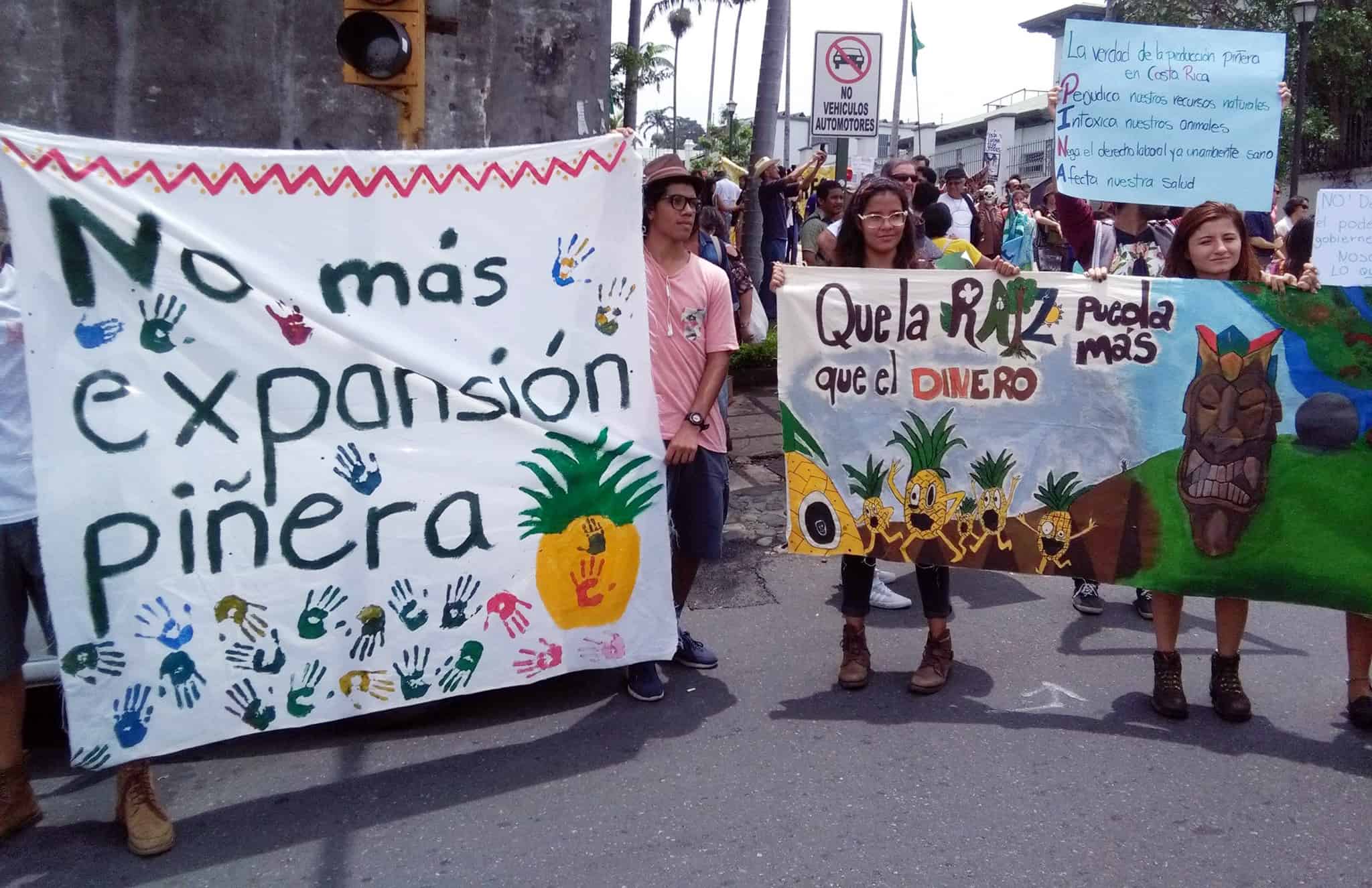 Members of various environmental groups demanded the elimination of permits for a pineapple expansion project granted to a local subsidiary of Del Monte. ((Via La Cabuya))

Environmental groups demonstrated Monday in San José against a permit for pineapple farming granted to a local subsidiary of the transnational company Del Monte in Costa Rica’s Southern Pacific region.

Opponents of the permit claim that the new 602-hectare area is too close to various protected areas, including the Térraba Sierpe wetland and four archaeological sites recognized as World Heritage by the United Nations Educational, Scientific and Cultural Organization (UNESCO).

Pineapple production in Costa Rica has been broadly criticized for years following public reports of cases of health problems in local populations caused by the contamination of soil and water with chemical substances used in farms.

Demonstrators gathered on Monday morning in front of the Legislative Assembly where they displayed banners and chanted slogans to express their rejection of the company’s plans for expanding pineapple crops in the region.

They then marched to the Environment Ministry (MINAE) where they delivered a document detailing the alleged irregularities committed by granting the farming permits. The document calls for the annulment of all environmental permits issued by MINAE’s Environmental Technical Secretariat (SETENA) to grow pineapple in the area.

Among the protesters at the Legislative Assembly were lawmakers and other leaders from the left-wing Broad Front Party, including Edgardo Araya and former presidential candidate José María Villalta.

Araya said that President Luis Guillermo Solís’ administration promised to issue a moratorium in order to investigate and curb all the abuses denounced, “but it’s obvious they are afraid of the big pineapple companies.”

MINAE said in a news release that ministry officials and experts are currently investigating the complaints about the project. Among other actions, they conducted an on-the-ground inspection on the farm on May 9.

Following the inspection, government officials recommended halting all work on the farmlands until measures are taken to protect wetlands and other protected areas. "We don't want a Costa Piña (pineapple)" reads one of the banners. (Via Bloque Verde)

The report recommends stopping all actions aimed at removing vegetation until MINAE’s National System of Conservation Areas (SINAC) conducts a proper delimitation of the three wetlands near  the farm.

The document also recommends ordering the project’s developer to establish clear boundaries on the property “so that all farming activities are conducted outside the wetlands.”

Experts also recommend the immediate suspension of any soil movement or land preparation, in order to prevent any damage at any of the archaeological sites located within a 56-hectare area. These sites are world-famous for their stone spheres and other pre-Columbian artifacts.

They also ordered the National Museum to draft and outline recommendations and measures for these areas, prior to any farming activities, “in order to protect the sites declared as World Heritage by UNESCO.”

Environment Minister Édgar Gutiérrez ordered that a special commission be appointed to evaluate all pineapple farming projects approved by SETENA throughout the country in the last year.

SETENA officials have yet to respond to the report’s recommendations and to the minister’s petitions, MINAE confirmed.

Abel Chaves, president of the National Chamber of Pineapple Producers and Exporters, said in a public statement that in order to receive SETENA’s permit, the transnational company had to comply with all requirements to “guarantee the protection of the archaeological heritage and the wetlands of the Sierpe de Osa region.”

“They include a description of the physical separation between the crops and these zones, as well as the hydrological dynamics of the lands, which means that the normal flow of rivers and rainwater to the wetland areas is ensured,” he said.

Chaves also said that the project will not pose any risk to forest areas in Sierpe de Osa, since the pineapple production will be carried out inside properties currently used for cultivation of melina wood, grass and oil palm.

“There is no primary forest in the project’s area,” he said.

Mauricio Álvarez, president of the Costa Rican Conservation Federation (FECON), said in a public statement that they, also on Monday, filed legal claims against two decrees recently approved that “would hurt the rights of indigenous groups and local farmers, and that would favor big companies.”

The other aims at eliminating a decree that allows companies to register agrochemicals here without a local evaluation of its possible effects.

That decree eliminated the requirement of hosting a public hearing to allow citizens weigh in on the registration. It also allows companies to register the agrochemicals’ toxicity information using documents in English, despite the Constitutional designation of Spanish as Costa Rica’s official language.

MINAE and the Agriculture Ministry also sent a news release reporting that they will soon sign into law a decree to ban the importation and use in Costa Rica of Bromacil, an herbicide that has been proven to cause significant pollution.

The chemical, widely used by pineapple farmers, has been linked with physicochemical properties that pose high risk of contaminating groundwater and affecting health.

The decree establishes a six-month period for pineapple farmers to stop using the herbicide and change their farming procedures to combat weeds.