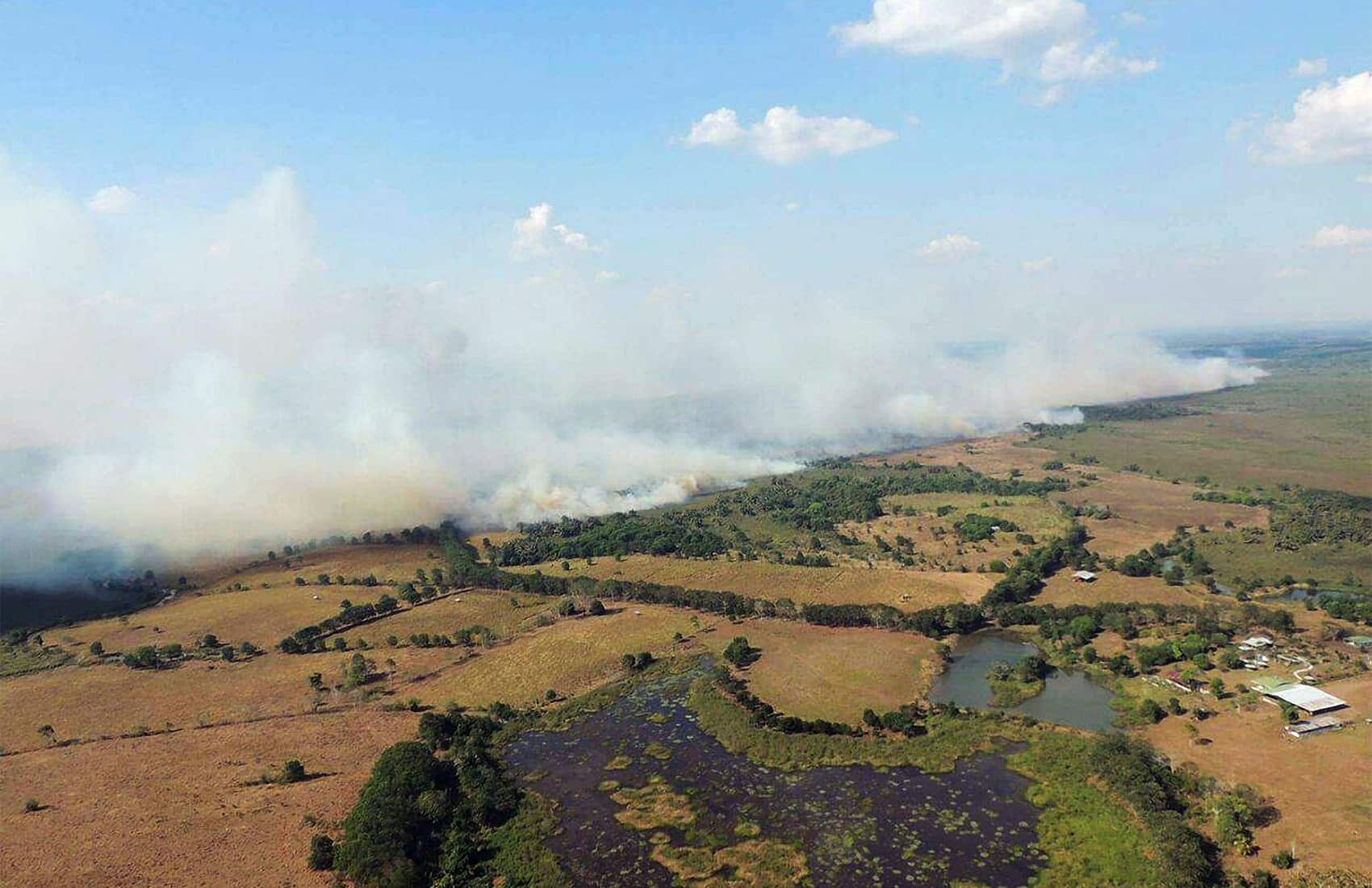 Wildfires in the northern zone are burning hundreds of hectares in a region near the border with Nicaragua. ((Courtesy of SINAC))

Firefighters are battling to extinguish at least six wildfires in the central and northern Pacific as well as in the country’s northern inland region.

The largest active fire has already consumed more than 1,500 hectares of wetlands in Los Chiles, north of Alajuela. The fire has burned through both private lands and protected areas in the hard-to-access region along the border between Costa Rica and Nicaragua.

Since Sunday, firefighters have been focused on extinguishing a wildfire inside Guanacaste National Park that has destroyed more than 900 hectares.

The fire began last Tuesday and was almost controlled on Wednesday, but strong winds revived the blaze.

Firefighter crews are taking turns to keep up the fight around the clock, as smaller fires are also affecting open areas in the Puntarenas cantons of Garabito, Paquera and Cóbano as well as Orotina in Alajuela.

Firefighters sent a helicopter bucket, called a Bambi Bucket, however strong winds along most of the Pacific region have prevented it from flying in certain areas.

There have been a total of 61 wildfires in Costa Rica since the beginning of the year, two less than during the same period last year, according to the National System of Conservation Areas (SINAC).

Luis Diego Román Madriz, coordinator of SINAC’s National Commission on Wildfires, said 30 of the fires have occurred inside protected areas. More than 1,100 hectares of protected areas have been burned and a large number of wild animals killed, according to a recent report.

Farmers in Guanacaste are struggling to feed their cattle as fires have consumed several hectares of grassland.

Officers from the Public Security Ministry’s Air Surveillance Service will conduct overflights in the most affected areas to monitor and evaluate damage. Flights mainly will be over the Guanacaste National Park and wetlands in the northern cantons of Upala and Los Chiles.

The provinces with the most wildfires so far this year are Puntarenas with 20, San José with 13 and Alajuela with eight.

Román asked the population to avoid lighting fires in open spaces, as the effects of an El Niño weather phenomenon are increasing temperatures and wind gusts in several areas of the country.

The National Meteorological Institute (IMN) reported Sunday that strong winds along most of the Pacific region will be present at least during the first three days of this week.

The current wildfire season began on Jan. 15 and according to IMN forecasts, extreme weather conditions likely will continue in the coming months due to El Niño.