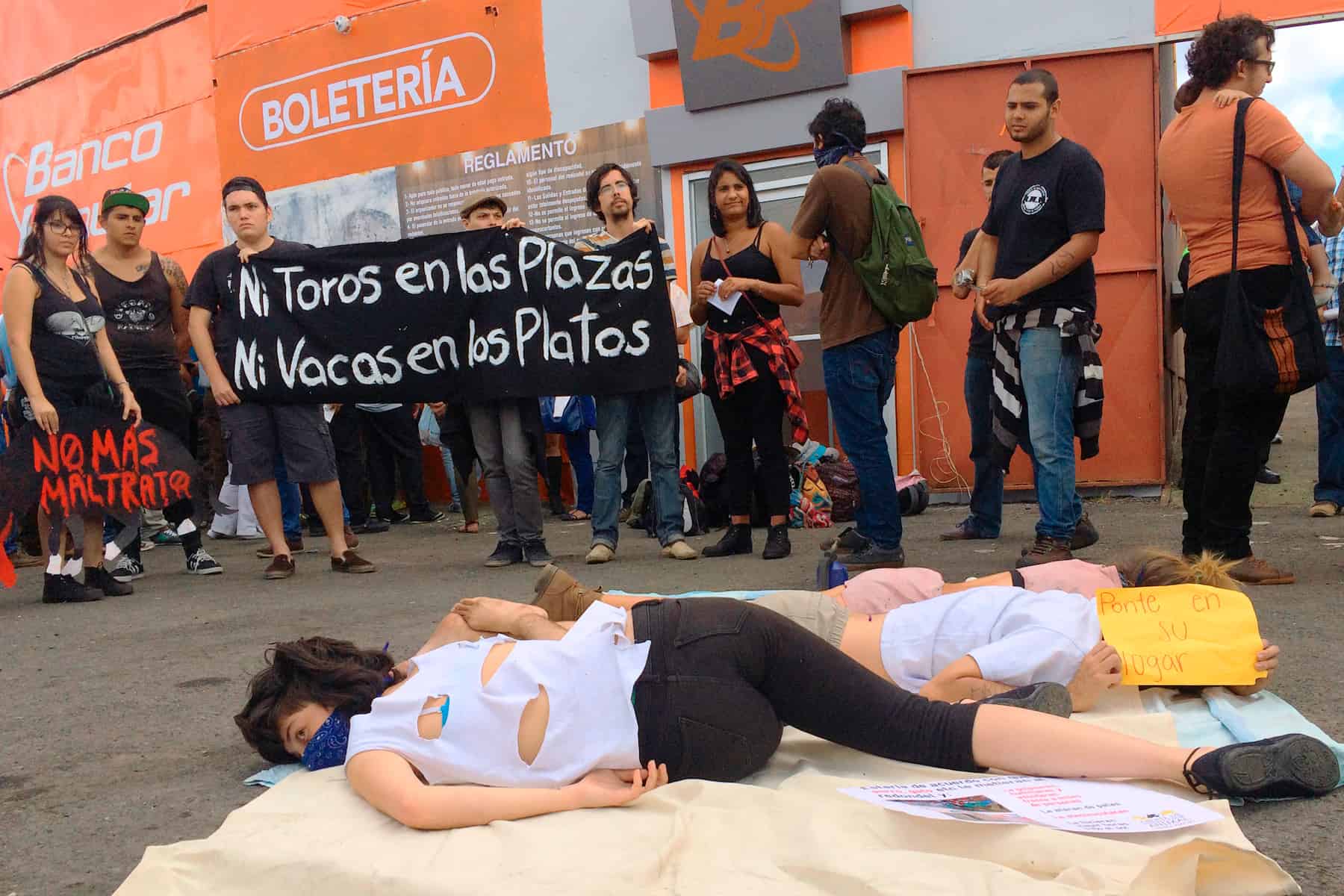 Protesters gathered on Dec. 25 in front of the box office at Zapote's bullring displaying banners with messages such as "No more bulls on bullrings or cows on plates," and "No more abuse." (L. Arias/The Tico Times)

Dozens of animal rights’ activists gathered Friday evening during the opening of the Zapote Festival, east of San José, to demonstrate against one of the celebration’s main events: Tico-style bullfights.

Demonstrators gathered in front of the bullring’s box offices chanting slogans and displaying banners with messages about the suffering bulls go through before, during and after the fights.

The protest’s main event, however, was a performance by a group of protesters simulating the marking of cattle using a hot iron.

The protest was organized by five groups under the umbrella name “Coordinated Group for Animal Liberation,” one of the members, Andrea Brizuela, said. She explained that the groups have joined together over the past four years to stage similar protests against bullfighting and against the National Horse Parade, rodeos and zoos.

The small but vocal group handed out pamphlets explaining what they said was abuse and mistreatment suffered by bulls from the moment they are taken from their farms, and before, during and after the bullfights.

“Bulls are raised in open fields and then suddenly they are crammed into a truck where they don’t receive any food or water. They defecate and urinate on each other, and travel exposed under the sun on the road for several hours,” Brizuela explained.

Then they are taken to dark barns under the bullring, where they get shocked with electric devices to make them aggressive, before being sent into the bullring “where hundreds of people scream at them, hit them, and then [the bulls] are tied up and returned to the barns and sometimes this results in their horns getting hurt and even broken,” she added.

The group will protest again in front of the Zapote’s bullring on Jan. 3 at 1:00 p.m., Brizuela said. Protesters staged a performance depicting the suffering they say bulls are subjected to by farmers. L. Arias/The Tico Times Ropes used to take the bulls back into the barns cause severe damage to their extremities, this sign reads. L. Arias/The Tico Times "Torture is not art, tradition or culture" was one of the slogans displayed on banners and chanted by protesters. L. Arias/The Tico Times Activists display messages asking people to show compassion to all animals, not only domestic ones. L. Arias/The Tico Times "Torture disguised as tradition" reads a banner held by protesters in front of lines of people entering the bullring. L. Arias/The Tico Times