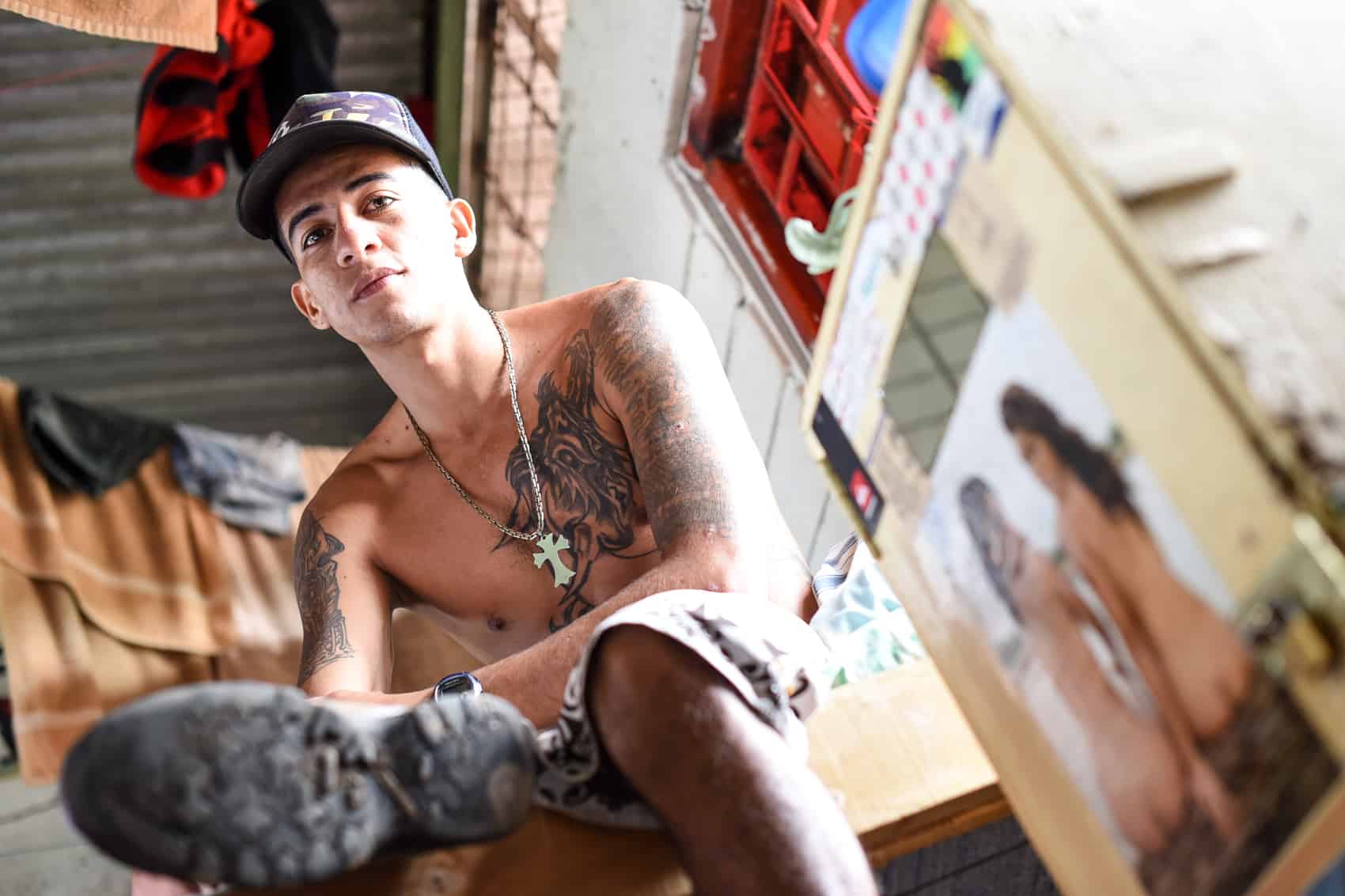 Green mountains rise up to meet the sky on a hot Monday morning in San Rafael, Alajuela. The scene is picturesque but take a step back and the view through the razor-wire fence changes from halcyon to hostile. It’s the same one that the 1,252 inmates in San Rafael prison see every day.

Prisoners hoot, jeer and pose, vying for the attention of the television cameras that have interrupted the monotony of life in the prison on this press visit.

“There’s no food, no marijuana!” crowed one voice from the crowd.

Costa Rica’s prison system houses more than twice as many prisoners as it’s built for. A series of judicial reforms and enforcement strategies were successful in catching criminals and putting them behind bars, but increased arrests and guilty verdicts outpaced the Costa Rican penitentiary system’s ability to keep up. With the 2016 budget debate looming, prison officials face the hurdle of securing funds to guarantee the basic needs of the country’s least sympathetic group.

Nearly 35,000 people are in the Costa Rican correctional system, including more than 14,000 who are incarcerated. San Rafael prison was built to house 704. It currently holds 1,252.

The Ombudsman’s Office has denounced the conditions in the prisons, calling them a human rights violation. The Ombudsman’s National Mechanism for the Prevention of Torture (MNP) noted that Costa Rica’s incarceration rate of 370 people per 100,000 is the fourth highest in Latin America.

Inside block A-2, simple wooden frame bunks line as much floor space as possible. Inmates, many shirtless in the heat, lounge on their bunks if they’re lucky enough to have a bunk. The cellblock is crowded – designed to hold 40 with 108 living inside – but people squeeze by each other like strangers on a crowded sidewalk. Anything that doesn’t fit on the floor hangs from the ceiling and the walls.

“Just wait till nighttime,” says a toothless inmate doing a 30-year sentence who called himself Francisco, “that’s when it gets bad.”

Because there are not enough beds, prisoners are forced to sleep on the ground with only a thin foam slab between them and the floor. Others sleep underneath the bottom bunks when there is no open floor space. In the courtyard facing blocks A and B, a pile of foam mattresses lie piled up in the sun. The extra mattresses are drying out before the prisoners lay them back on the cellblock floor to sleep.

“You can’t even walk through here at night. The mattresses line up on the floor like carpet,” wall to wall, said Ricardo Vargas, a tattooed 21-year-old inmate.

Beyond the sleeping conditions, inmates complained that the overcrowding keeps them from being able to see family on visitation days. They also complained about small food rations — rice, beans and chayote — and unsanitary conditions. Many of the overcrowded cellblocks have only one toilet per 100 inmates.

But many said work is their main concern. “We want to work, we want jobs. Here, there’s no way to lift ourselves up,” said Ronald Miguel Chávez, 50, serving time for robbery.

There are workshops where prisoners can build things to sell, Chávez said, but the penitentiary does not provide any materials, tools or training. There’s simply too many inmates.

José David Sánchez, 20, stood under the shade of a tree in the courtyard. Sánchez, baby-faced, has never been in prison before and just finished his first five months of a three-year sentence for robbery. He has been studying for his high school diploma in what he called a “street classroom,” a common space in the yard where inmates can meet with volunteers or instructors from the Education Ministry.

Sánchez said he’s worked his whole life and had saved up enough money to buy a taxi before he was caught up in a robbery and landed here. He said he wants to be a chef when he gets out. Until then, he’s just passing time.

San Rafael’s warden, Miguel Lobo, knows the challenges that are ahead for the vast majority of these prisoners.

“When people get out of prison, if they don’t have help it’s very difficult. They don’t have the right tools to make it,” Lobo said.

This, perhaps amazingly, is exactly what a select group of prisoners here are getting. In a separate cellblock, the crowds of prisoners disappear and the environment becomes reminiscent of summer camp cabins — but with razor wire. There are 70 inmates living here in cellblock E. All are inmates with physical disabilities and are non-violent offenders who are almost done with their sentences. This is the only part of San Rafael that is not over capacity. In fact, there is still room for another 26 prisoners in this oasis.

Of course, not everyone in prison gets this kind of treatment. With more than 600 prisoners entering the Costa Rican penitentiary system every month, there are hardly enough resources to meet the basic needs of those already in the system. Lobo said this influx is the equivalent of one new prison every month.

Harsher sentences and the implementation of flagrancy courts — expedited trials for criminals caught in the act with pre-assigned sentences — have ballooned the prison system. MNP’s April report noted that the steep increase in the prison population is due, in part, to reforms to Costa Rica’s criminal justice system. More than 30 percent of the current prison population is serving time assigned by flagrancy courts and other abbreviated court proceedings. Lobo called them “prisoner factories.”

“It’s not just a question of the budget. It’s a question of policy,” Lobo said. “There need to be stronger social policies that look after those with the least so that these people don’t end up here.”

Lobo described cellblock E, also known as “Opportunities,” as a pilot program for inmate rehabilitation and preparation to re-enter society. One of the most important services offered to these inmates is a padrino, or “godfather,” who serves as a kind of sponsor for the inmates when they leave prison. Besides the padrinos, inmates here work in communal gardens, cook their meals together in a large kitchen and have access to a library. There’s even a butterfly garden.

That’s where David Román Fonseca was on Monday morning. The 24-year-old boxer is set to be released in the next two months after serving his sentence for aggravated robbery.

“For me, first, I learned about spirituality, God,” he said. “There’s also the lesson that comes from my crime. Just because I made a mistake dones’t make me a criminal” for life, he said.

Fonseca said cellblock E has been a dramatic change from his time in San Carlos prison, where he served the majority of his time. He said he was looking forward to seeing his 2-year-old daughter, who was born while he was incarcerated.

“This place is like another world,” he said as orange and pale yellow butterflies floated by. 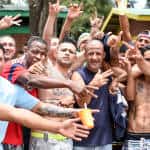 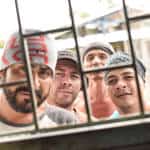 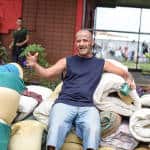 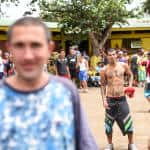 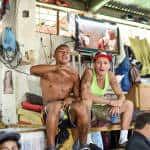 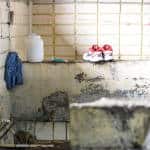 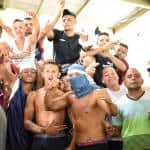 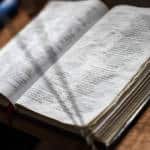 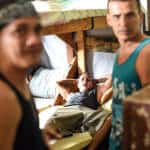 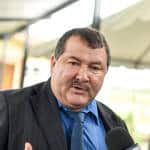 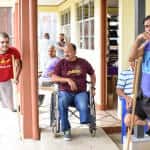 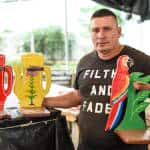