What if there’s no deal on rescuing Greece by June 30 deadline? 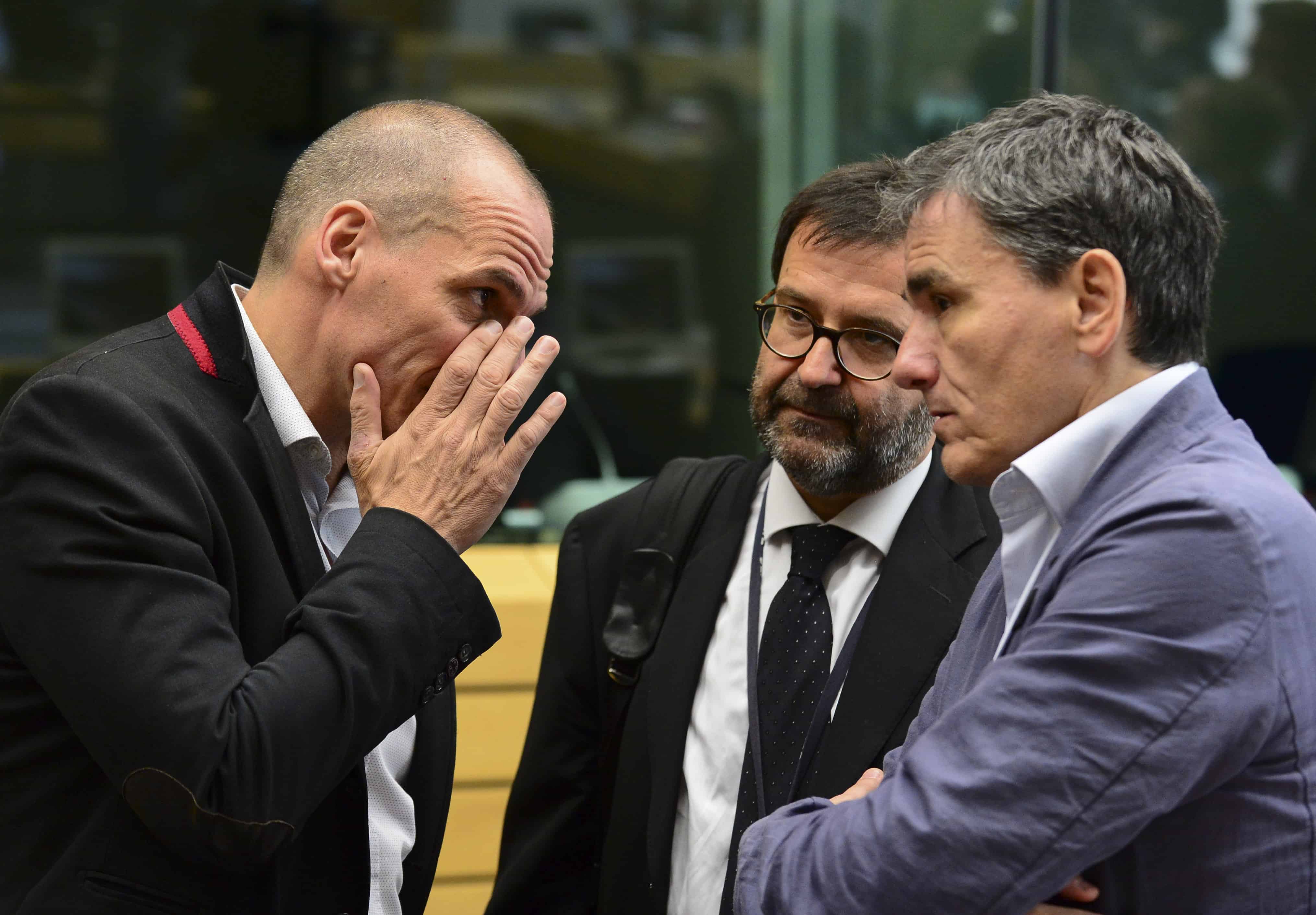 Greek Finance Minister Yanis Varoufakis, left, gestures as he talks with advisers before a Eurogroup Council meeting on June 24, 2015 at the EU Headquarters in Brussels. (John Thys/AFP)

The Greek crisis has been punctuated by deadlines that have come and gone without any change in the country’s position within the euro region.

The latest one is June 30, when Greece’s current bailout expires and it’s due to make a payment to the International Monetary Fund. The question is whether investors should get worried or if it’s just another date in the calendar that government leaders and creditors will work around.

A: Greece’s second bailout, agreed in February 2012, expires after it was extended twice since December. Without extra time again or a new accord, Greece will lose access to the funds remaining from its official creditors — the European Union, the European Central Bank and the IMF.

In theory, they will be obliged to treat Greece like any other country that isn’t in an aid program. That’s a particular problem for the ECB, which has kept afloat Greek banks bleeding deposits while the government negotiates a deal.

The ECB has said it can continue to provide Emergency Liquidity Assistance, or ELA, as long as the banks are solvent and provide sufficient collateral. While the end of the bailout wouldn’t mean the banks automatically become insolvent, the quality of collateral will come into question.

Even if the ECB maintains access to ELA for a little longer, the banks will eventually run out of eligible collateral. Bundesbank President and ECB governing council member Jens Weidmann has repeatedly warned that providing the money for Greek banks raises concerns about monetary financing, prohibited under EU rules.

This is what they did in February to allow the newly elected government of Alexis Tsipras more time to work out a deal with the creditor institutions.

This time it’s more difficult because Tsipras has had five months to agree to the strings attached to more money. Extending the bailout without any aid disbursement until an agreement is reached would also leave Greece unable to service its debt with its cash reserves nearly depleted.

And here’s the rub: extending the bailout would need the approval of the German Parliament, along with other assemblies around the euro region. Germany has said that before the Bundestag takes any action, Greek lawmakers must first convene in Athens and pass economic policy changes.

Do we care if Greece doesn’t pay the IMF?

Missing an IMF payment in itself doesn’t constitute a default. The euro zone’s bailout fund, however, would have the option to accelerate Greece’s payment schedule on the bonds it holds. Should a deal be agreed, the fund may refrain from doing so, assuming that aid would be unlocked in a matter of days.

Without a deal, it could decide to accelerate the bond payments. IMF Managing Director Christine Lagarde sounded the alarm last week, saying there is no grace period and Greece would be immediately in arrears with the IMF if it misses the 1.5 billion-euro ($1.7 billion) payment on June 30.

In a Catch 22 situation, Greece would lose access to any financing from the IMF, including from its existing program, while it remains in arrears.

When does Greece actually run out of money?

It’s a fair assumption that the government will struggle to pay the biggest bill coming due: about 3.5 billion euros owed to the ECB on July 20 followed by another 3.2 billion euros due on Aug. 20. If either payment is missed, it will become very difficult for anyone in the ECB to argue that they should keep Greek banks on life support.

With banks locked out of funds, the government would be forced to impose capital controls to stem outflows. Depositors have withdrawn more than 30 billion euros since December.

So will Greece go bust if the June 30 deadline is missed?

Probably not immediately. But it’s difficult to see how Greece could survive without imposing capital controls in the absence of a deal. The government could fund itself for a few more weeks or months, relying on reserves mobilized from local municipalities and other state entities.

While missing debt payments may not necessarily push the country out of the euro, it may be just a matter of time before it is forced to issue its own currency as bills at home and abroad will mount.

The majority of Greeks, as well as the country’s euro-area partners, have said that they want the country to remain in the single currency. Ultimately, political developments may determine Greece’s fate: whether a referendum or new elections lead to a resumption of negotiations.

Alejandro Zúñiga - Apr 03, 2020
Do NOT follow this link or you will be banned from the site!