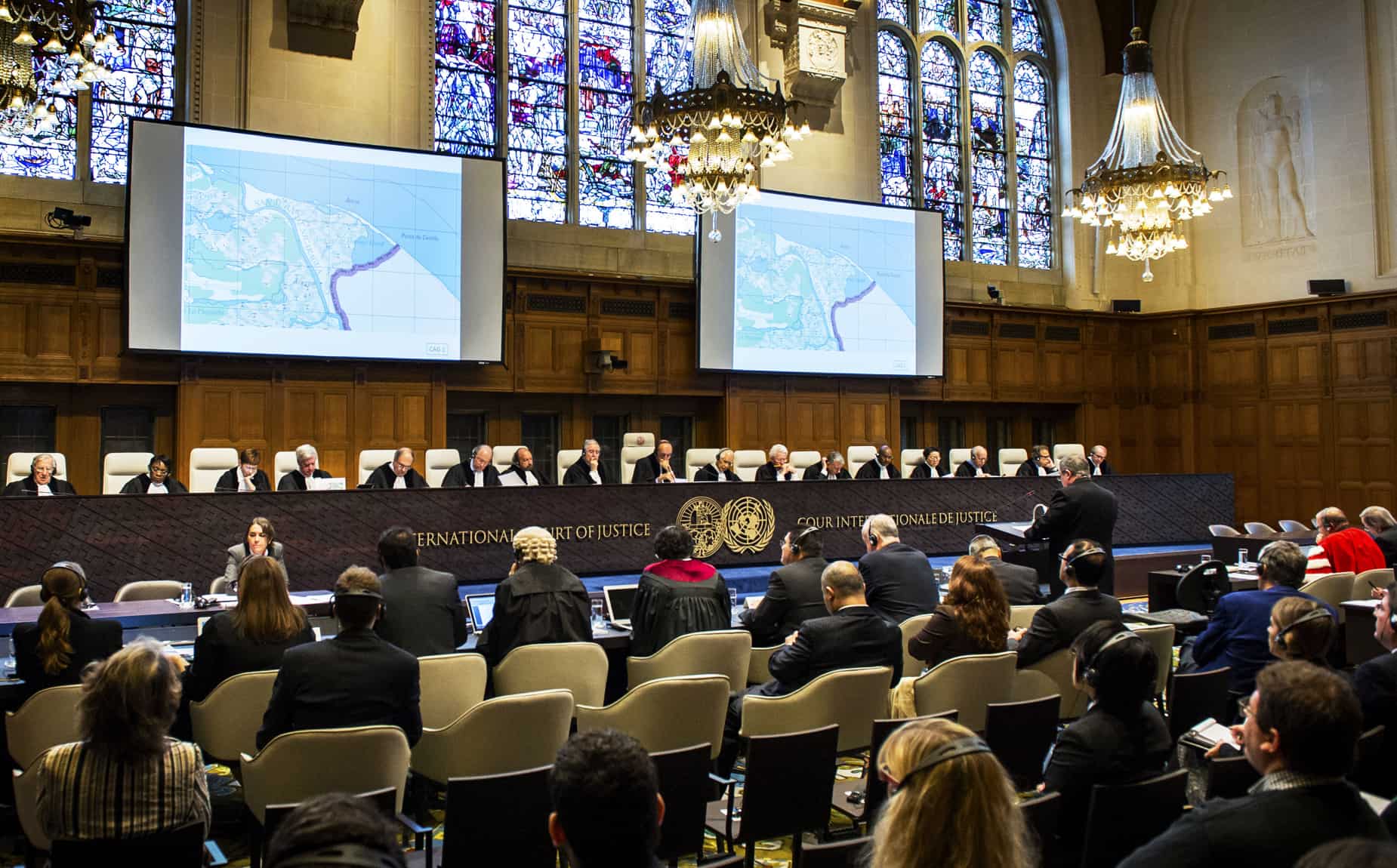 On Tuesday and Wednesday Costa Rica's legal team will present its closing arguments on the alleged invasion of territory by Nicaraguan military, and the construction of artificial canals in the disputed area. ((Courtesy of ICJ))

Final hearings start Tuesday at the International Court of Justice (ICJ) in the long-running border dispute between Costa Rica and Nicaragua.

During the final stage of the legal process at The Hague, Netherlands, which started in 2010, legal teams from each country will present their closing arguments. The hearings are scheduled to last until May 1.

ICJ justices in 2013 decided to join claims of both countries into a single case, in order to save time and ensure that final rulings on both cases can be reached in the same tone.

A date for the ICJ’s ruling has yet to be announced. But experts from both countries have said they believe it will come later this year.

What are they disputing?

In 2010 Costa Rica filed the first complaint against Nicaragua for alleged invasion by military personnel of a 3-square-kilometer territory both countries claim as their own.

Costa Rica calls the site Isla Portillos and Nicaragua calls it Harbour Head. The small area is protected by the RAMSAR Convention on Wetlands of International Importance.

In 2013 Costa Rica expanded its complaint and accused Nicaragua of carrying out dredging works that affected its territory, and of constructing artificial canals in the disputed area with the purpose of connecting the San Juan River with the Caribbean Sea. The ICJ had ordered both countries to keep out of the disputed area.

In 2011 Nicaragua responded by filing a complaint against Costa Rica for alleged environmental damage to the San Juan River, a natural border between the two countries. The damage, Nicaragua claimed, resulted from the construction of a 160-kilometer road, Route 1856, that runs parallel to the river.

Costa Rica built the road as a response to complaints from residents of border communities who are forbidden by Nicaraguan military from using the San Juan River for transportation.

What happens at the final hearings?

Nicaraguan lawyers will open the second week with oral arguments against Costa Rica’s alleged environmental damage for two days, and then Costa Rica will have two to respond.

The third and last week is open for rejoinders. April 28 and 29 will be dedicated to the Portillos Island case, while April 30 and May 1 are scheduled for the border road case.

Costa Rica’s closing arguments will include testimony by two experts from the United Kingdom: Colin Thorne, Professor of Physical Geography at the University of Nottingham and professor Ian Cowx, from University of Hull‘s International Fisheries Institute.

They both will present the results of studies carried out at Costa Rica’s request. The studies are part of the 5,846 pages of evidence the legal team filed at earlier stages of the trial.

Nicaragua has not yet disclosed if it will file new evidence.

Who are the legal teams?

Nicaragua’s legal team will be led by Ambassador to the Netherlands Carlos Argüello Gómez, plus U.S. attorneys Paul Reichler and Lawrence Martin and Professor Alain Pellet of the University of Paris.

What has the court already ruled?

Following Costa Rica’s first claim, the ICJ imposed injunctions in March 2011 ordering both countries to completely clear out of the disputed area pending a final ruling.

Nicaragua complied with the decision, stopped dredging works and started repair work on the canals.

In April 2013 the Court rejected four separate complaints from Nicaragua seeking to halt construction of the border road in Costa Rica. At the time, the ICJ stated that “Nicaragua failed to demonstrate the project’s damage to the San Juan River, or alleged dangers to flora and fauna inside Nicaraguan territory.”

As a result of these rulings, the ICJ announced it would consolidate both countries’ complaints into a single case to expedite the process.

What’s happened recently on the ground?

Earlier this month, Costa Rica blocked one of the artificial canals that Nicaragua opened in 2013.

What is Costa Rica expecting from the ICJ rulings?

Border communities say they need the road because they’re no longer allowed to freely use the San Juan River as they had traditionally done before the conflict. In recent months Costa Rican officials have received several reports of Nicaraguan military repeatedly forbidding Costa Ricans to travel on the river.

In a 2009 ICJ ruling, the court prohibited armed Costa Rican police officers from using the river for transit. But members of the Nicaragua army have detained residents, tourists, tourism employees and even scientific groups and international observers from RAMSAR who traveled to the area to assess the alleged damage in Costa Rican territory.

What about the countries’ other cases before The Hague?

The final decision in the Costa Rica-Nicaragua case could pave the way for rulings on other territorial disputes involving Nicaragua. Besides Costa Rica, the country has cases pending before the ICJ against Honduras, El Salvador, Panama and Colombia.

In all those cases Nicaragua seeks rights over territories it considers its own.

In February 2014, Costa Rica filed a new lawsuit before the ICJ to define maritime borders with Nicaragua in the Caribbean and Pacific Ocean, where Nicaragua has been looking to expand its territory. The case will be tried in a new separate process at The Hague.

Nicaragua does have one ICJ victory under its belt: in 1986 the court ruled in favor of Nicaragua on its claim of illegal U.S. military and paramilitary occupation of Nicaraguan territory.

The Tico Times reporter Zach Dyer contributed to this story.