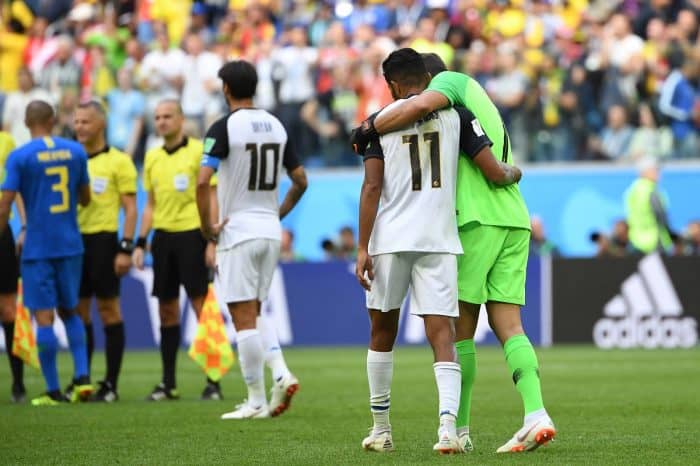 Defender Roy Miller will miss Costa Rica’s historic World Cup quarterfinal with the Netherlands on Saturday because of a left foot injury, according to his federation. Miller, a reserve defender on the national team, almost certainly would’ve certainly started against the Dutch in place of centerback Óscar Duarte — who was red carded during the Ticos’ previous match.

Miller started in the final group game, a 0-0 draw with England. But now La Sele will look for a new replacement for Duarte — who was sent off in the 66th minute of Sunday’s last-16 game against Greece which Costa Rica won on penalties. Jhonny Acosta or midfielder José Miguel Cubero are the likely options to fill the absence.

“The scan showed Miller had a slightly torn muscle in his left foot,” the federation said in a statement.

The 29-year-old, who plays for MLS side New York Red Bulls, is useful to Costa Rica as he can play at left back or central defense. La Sele also lost another versatile defender, Heiner Mora, to a heel injury right before the World Cup began. As a result, the Ticos’ excellent defense looks rather thin at the moment.

Costa Rica will start as the underdogs against the Dutch despite having topped their group with victories over Uruguay and Italy. The Ticos are playing in their first ever quarterfinal thanks to a gutsy performance against the Greeks as the team held on following Duarte’s expulsion.

For the opposition, Netherlands midfielder Nigel De Jong will almost certainly miss the rest of the World Cup after suffering a torn groin muscle, a statement said Tuesday.

The Dutch Football Association (KNVB) said on its Twitter feed that De Jong would “probably” be sidelined for two to four weeks, ruling him out of the remainder of the tournament.

The holding midfielder limped off early in Holland’s 2-1 win over Mexico on Sunday.