Deliciously dirty in the Orosi Valley 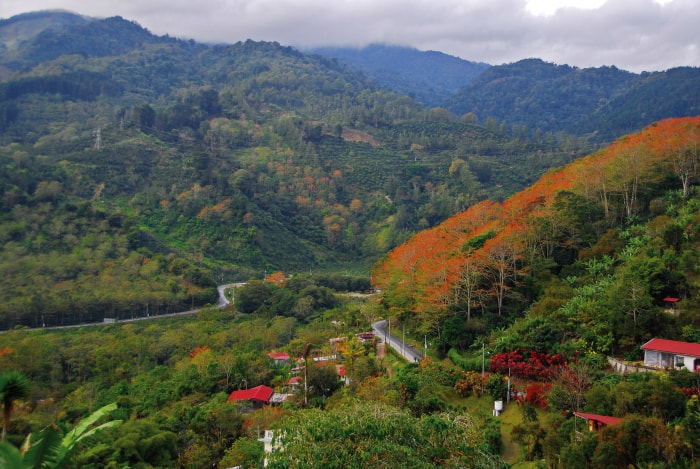 The Orosi Valley, in Cartago. (Photo by Andrés Madrigal.)

My wife Melanie and I made a special point of taking the train, which runs obscenely limited hours, from San José to Cartago as far as it travels in that direction. The final stop is near the famous Básilica de Nuestra Señora de los Ángeles. On the train we met an expat who has called the town of Cachí home for some time now. He pointed us in the direction of buses that would finish the trip to El Salto Inn.

However, the drastic change in climate came unexpectedly. Clouds blanketed the sky. The misty air left the surrounding buildings looking a bit soggy. It all had the air of an Irish city.

I, unfortunately, came unprepared for an impromptu visit to Cork, and was left shivering in a t-shirt and jeans. Needless to say the prospect of lugging a rolling suitcase around over uneven slabs of sidewalk did not seem appealing, and so we opted for a cab to finish the journey.

Reaching El Salto is no easy feat. Co-owner Manuel leaves explicit bus and driving instructions on the website that came in handy when it came time to blurt out, “Ir a la derecha!” off the highway, just passed the Mirador of Ujurrás. Posted signs directed the next two turns, and recent landslides covering the road ensured we didn’t miss our stop at the white gate.

Manuel met us at the gate and joined us for a short and very steep jaunt down a switchback driveway. Instructions at the gate asked for five minutes after ringing the doorbell and it was easy to see why.

El Salto appears after a few turns down the driveway, a modest looking three-story development made of wood, stone, and the typical Latino-style tin roofs. A couple of bust sculptures that you might usually see outside of ancient ruins stand outside the entrance. Small wooden signs donated to El Salto give a glimpse of some previous visitors. Tehran, St. Gallen, Hochdorf, even a Pittsburgh sign with the urine-stained paint synonymous with the Steel City makes an appearance.

(I kid because I love Pittsburgh. As much as I love petty American sports rivalries.)

After showing us to our room, essentially a concrete box made with simplicity in mind, we took a moment to admire the view outside our door of the Orosi Valley. The star of the view was a thundering waterfall that could be heard quietly drumming all through the night. It’s relaxing for those who need some noise to fall asleep, but easily ignorable for others. I for one come from living in Downtown Cleveland for three years and Chicago before that where the ambient sounds of a city – buses, trains, people – are constant. Y’know, life. So the waterfall-infused nighttime soundtrack was a welcomed surprise.

After admiring our view, we turned back passed a couple of hammocks, up a set of concrete steps, and through a faded wooden door held open by a small boulder to the common area and kitchen space. Manuel sat us down with a shot of “illegal moonshine,” as he put it, for our sipping enjoyment as we chatted.

Manuel, a slender gentleman with a commanding voice and wavy black hair not unlike Javier Bardem, hails from central Mexico. He had a plan to travel through all of Central and South America, ending in Buenos Aires, when he ran out of money in Costa Rica.

“I thought I better start making some money!” he laughed.

This turned into managing a San José hostel where he had been staying. Manuel recounted the job offer coming as with the pomp of extra fries at an American diner. Eventually this led to Brewha, which was rebranded earlier this year to El Salto to cater more toward families, couples, and the occasional backpacker rather than exclusively backpackers. As such, rooms previously made for throngs of hostel travelers have since been converted.

Manuel typically serves dinner — $12 a plate – around 8 or 8:30, but made an exception to serve an hour earlier for a visiting Swiss family with three brightly blonde-haired kids. The kids were busy swinging around the hammock with Madagascar 3 playing in the background as Manuel prepared dishes of chicken and fettuccine alfredo. He recited lines and laughed along as much as the kids.

“I love those movies,” he exclaimed in between laughs.

Dinner also came with the option of purchasing a bottle of Manuel’s homemade beer.

I opted for the chocolate stout. A bit smoky at first, but it mellows out to offer an enjoyable taste you don’t find much in Costa Rica between the seas of Imperial, Bavaria, and Pilsen. Plus knowing where your beer comes from, as is the case with food, makes it all the better.

Breakfast the following morning came with vanilla and chocolate pancakes, strawberry jelly, honey and butter, and a bowl of fruit.

While the morning meal was certainly agreeable, the weather was not. Manuel had warned us as much when we first exchanged messages that rain the night before a hike could make the path too slippery. I brushed off the written warning before seeing just how incredibly different weather in Cartago can be.

However, this was why we came to the Orosi Valley. We wanted a serious hike, something slightly masochistic. The kind of athletic endeavor where you have earned your beer at the end, or in this case, a belly-splitting casado.

I could tell Manuel didn’t have the heart to tell us “no.”

“I don’t know guys,” he said, shaking his head slightly in regret. But he still couldn’t flat-out deny us the trail.

As Melanie and I worked on a Plan B, I noticed a bit of blue sky off in the distance. This was enough to send Melanie over to Manuel’s office with the hope of a small child on Christmas morning. Her face said it all.

Knowing how quickly the weather could turn, Manuel wasted no time changing into a pair of heavy duty hiking boots, and we were off.

The trail, created and maintained by Manuel and his gardener, literally starts right outside the front door, meaning it truly is an El Salto specialty. This trail is not of the manicured variety you’ll find outside, let’s say, Vólcan Poás. This is a trail that would be reclaimed by nature in no time if not taken care of meticulously.

Branches, tall grasses, leaves, trees, small rocks, boulders – everything you can imagine in a rainforest trail was there. And let’s not forget the anthills, which covered the trail like landmines — if stepping on a mine unleashes thousands of tiny insects ready to burn your skin. You know someone’s been attacked if they suddenly slump over their legs, smacking them wildly, and shout any number of expletives.

Thanks to the consistent mist and rain of the Orosi Valley, the path was as muddy as advertised. Sharp declines and loose stone made taking a spill a concern. At times, under Manuel’s instruction, we purposely allowed ourselves to slide with some steering and control offered by adjacent, sturdy branches we would hold onto for nature’s helping hand. After Melanie did in fact take a hard fall down a switchback trail covered in slick mud, we always made sure a helping hand was ready. This especially came in handy (no pun intended) as we scaled boulders along the banks of a river and again when we finally crossed the river. The knee-high rush of water was ready to sweep us out from under our feet, but Manuel’s experience of covering this trail as much as three times per week wouldn’t allow for anything drastic.

Our first highlight came after about an hour’s worth of downhill hiking — the waterfall that could be seen from our hotel balcony. This is the kind of natural wonder you hear about in Costa Rica. The kind that simply renders you speechless until your brain flickers on again, only to utter, “Wow…”

Though we had seen impressive waterfalls before in Costa Rica, namely at La Paz Waterfall Gardens, we give this one preference because we earned the view whereas the aforementioned gardens essentially hold your hand the entire way. This was a moment that not everyone could physically reach.

With the rigorous portion of the hike over, we headed to a squash farm. Now away from the river and hillside, it was smooth sailing over flat, gravel train as we admired the surrounding farms and fruit ripe for picking. Manuel, saying he had permission to grab what he likes, picked us some oranges and cas, a kind of guava.

This all leads to the small town of Ujurrás, whose crown jewel is the Ruins of Ujurrás — Costa Rica’s oldest colonial ruins. Estimates say the church was built at some point in the late 16th Century, housing the miraculous statue of the Virgin of the Holy Conception of Ujurrás – a patron saint of colonial times. Said statue allegedly protected the area from pirate attacks. However, earthquakes and disease were evidently out of the statue’s protection plan, thus the site was subsequently abandoned, forcing the local population (along with their holy statue) to relocate and create nearby Paraíso.

The church stands out as one of the few architectural reminders of Spain’s conquest in the Costa Rican part of the New World. Today a manicured park full of locals enjoying themselves surrounds the preserved ruins. There are just a few tourists. The culture clash of the day came just around the corner from the ruins where a group of Ticos were playing football — American football.

By this point, we had truly earned our casados. Thus we parted ways with Manuel, who had an appointment with a “chicken lady” to get back to, and helped ourselves to a heaping pile of casado con pollo at La Pipiola just down the street from the park. Our waiter confirmed our suspicions that the squash came from the farms we had just hiked through.

The Orosi Valley, through the work of Manuel and El Salto, had given us what we long desired — a hike that put us on our respective asses in tired awe. Not only had the valley challenged our bodies, but now it was nourishing us back to health. There must be a metaphor in there somewhere, but the Orosi Valley also left me too exhausted to think.