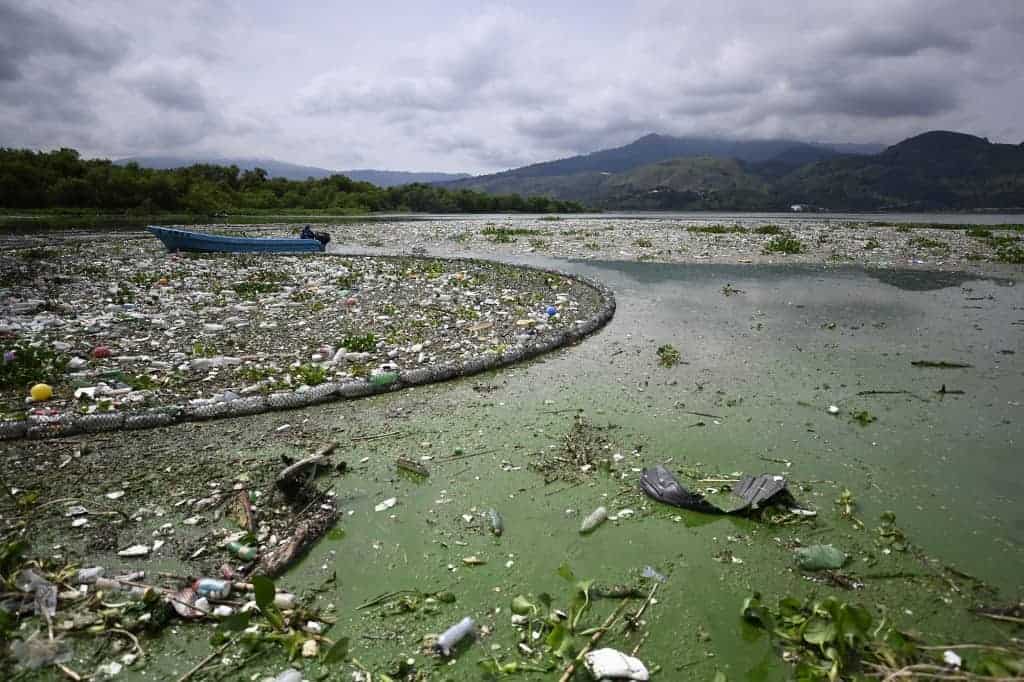 Dragged by different tributaries, immense deposits of multicolored plastic cover like a blanket the calm waters of Lake Suchitlán in El Salvador. The same happens on the paradisiacal beaches of the Honduran Caribbean, which receive thousands of tons of waste from Guatemala.

Soda bottles, medicine containers, old sandals and all kinds of plastic materials float in the green waters of this 13,500-hectare Salvadoran lake, which serves as a reservoir for a hydroelectric plant and is considered a wetland of international importance by Unesco.

The fishermen of this enormous artificial lake, the largest body of fresh water in the country, say that the contamination has pushed the fish into deep waters where they cannot cast their nets to catch tilapia or guapotes.

“We haven’t been able to fish for more than two months,” Luis Peñate, a 25-year-old fisherman, told AFP. He is now dedicated to transporting the few tourists who dare to visit him in a boat belonging to another fisherman in order to make a living.

Ducks make their way through the garbage, small turtles climb on the floating bottles to sunbathe and some skinny horses drink from the contaminated water.

It is “pollution like never before,” says Jacinto Tobar, mayor of the town of Potonico, in the department of Chalatenango, some 100 km north of San Salvador. “The fauna and flora are suffering a lot” and tourists are becoming fewer and fewer, he says.

Fishermen must compete with the estimated 1.5 million black cormorants that inhabit the lake, according to the mayor, and which have become a kind of plague because they arrived one day as migratory birds and stayed.

With some 2,500 inhabitants, Potonico is the most affected municipality of some 15 towns bordering the lake.

The state-owned Comisión Ejecutiva Hidroeléctrica del Río Lempa, which manages the life of the Suchitlán reservoir, employs dozens of workers who clean the lake by hand. And some neighbors collaborate in this task that, according to the mayor, will take three to four months.

“What can we expect from the future if we don’t take care of our environment, if we dirty our streets, rivers, lakes, forests and beaches?” said Salvadoran President Nayib Bukele this week after the launch of the national “Zero Garbage” campaign.

The Salvadoran Minister of the Environment, Fernando López, assured that 4,200 tons of waste are generated daily in the country, of which 1,200 tons end up in rivers, beaches or on streets throughout the country.

From Guatemala to the coast of Honduras

One of the worst sources of plastic pollution on the Caribbean coast of Central America is on the beaches of the Omoa region in Honduras.

The coast of this region about 200 km north of Tegucigalpa is beautiful, with abundant vegetation and palm trees, but in some areas the sand is practically covered by a thick plastic carpet of containers of all kinds, syringes and other waste.

The tons of waste that the Motagua River carries from Guatemala have created “garbage islands” floating in the Honduran Caribbean, according to repeated complaints by local authorities and activists. The issue has generated tensions between the two countries.

In view of the problem, the Dutch NGO The Ocean Cleanup warns that some 20,000 tons of plastic waste pass through the Las Vacas river, a tributary of the Motagua, every year, most of which comes from the landfill of the Guatemalan capital.

Pollution must be attacked at its source, warn environmentalists.

“We have to attack where the main flow of all this waste comes from,” says Eduardo Arguera, 29, an architecture student at the University of El Salvador who has promoted civil society cleanup campaigns.

To contain plastic waste and prevent it from reaching lakes and the sea, he proposes the placement of fences at strategic points.

The president of the Center for Appropriate Technology (CESTA) of El Salvador, Ricardo Navarro, considers that the cleanup of plastic material “is a priority”. He explained that only 30% floats, and the rest sinks in the depths of the waters.

According to a report by the United Nations Environment Program (UNEP), 11 million metric tons of plastic enter the oceans each year. It warned that this figure could triple in the next 20 years.