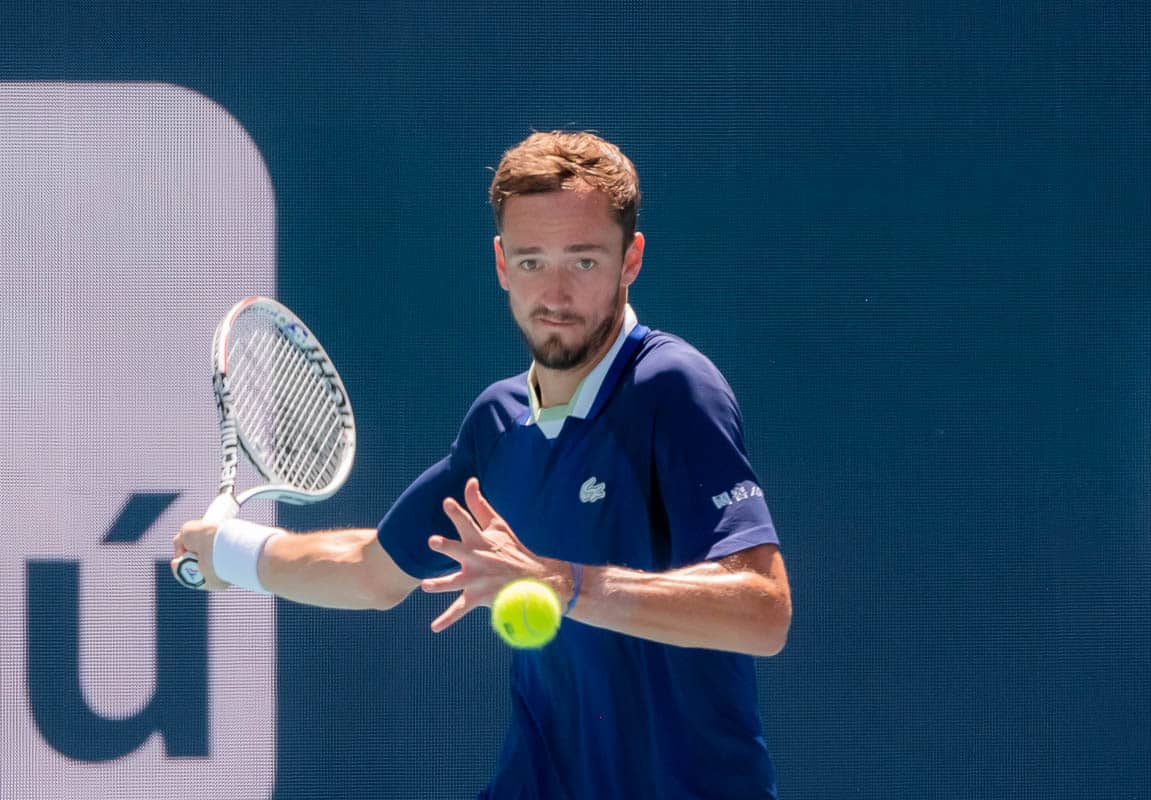 Back on the 28th of February 2022, Daniil Medvedev finally reached the number 1 position in the ATP world rankings. He overtook Novak Djokovic, generally regarded as one of the best players in the sport. This is, in part, down to the fact that Novak hasn’t competed in a while (he was deported from Australia prior to the Australian Open).

While Daniil Medvedev quickly lost his place at the top of the pile due to a poor performance at Indian Wells, there is every chance that he could be reclaiming that number 1 position during the Miami Open. All it takes is one good run…and although the competition will be tough with the quality of players at the tournament, he is the odds on favorite to win.

Who Is Daniil Medvedev?

Daniil Medvedev is a Russian tennis player who has been kicking about on the pro tennis circuit for a while. He started in 2015 and started to see successes pretty much straight away. He certainly wasn’t winning any tournaments during those early days of his career, but he was certainly doing much better than expected.

In 2019, the guy really started to hit his stride. He managed to pick himself up two Master’s Titles and a US Open final place. In 2020, he added to his Master’s titles.

His rapid success saw him quickly racking up those ATP ranking points. His US Open win and two Australian Open finals in the last few years really helped too.

In 2022, Daniil Medvedev saw his biggest success. He hit the illustrious World Number 1 ranking. He was the first new player to hold the number 1 position in around 14-years as only the big 4 in the modern game (Djokovic, Murray, Nadal, and Federer) had been in that number 1 spot in that time. Medvedev reaching it was a big deal. A really big deal. Even if the position was lost quickly after.

How Daniil Medvedev Can Reclaim The Number One Position

There have been mutterings that Daniil Medvedev will reclaim his number 1 position ranking during the Miami Open, and it isn’t difficult to see why.

For starters, none of the players that would generally be considered to give him the most difficulty are in the tournament with the big exception being Germany’s Alexander Zverev the current world No. 4. Novak, the current world number 1, is out and he is unlikely to be returning to the game any time soon. Most of the other big players had to miss the Miami Open for a variety of reasons, mostly due to health. This means that Daniil Medvedev raise to the top spot will not be as difficult as it could have been.

So, what does Medvedev need to do? Well, if he wants to get back into the number 1 position, he just needs to hit the semis. He doesn’t even need to win the semis. As long as he gets there, we will gain the number 1 spot again. It is guaranteed.

Unless something goes drastically wrong during the tournament, Medvedev should have absolutely no issues hitting the semis. In fact, there is a good chance that he will end up winning the entire tournament.

How Long Will Medvedev Hold Onto The Number 1 Position?

If Medvedev does reclaim his number 1 position, and it is likely that he will, then he will probably hold onto it for a while. The only person that is really going to be giving him serious competition at the moment will be Novak. Since Novak is not playing in tournaments due to his unvaccinated status, he isn’t going to be picking up any ATP ranking points.

As long as Medvedev continues to perform well at tournaments, then he could hold onto the number one position for a while. He doesn’t even need to win the tournaments. As long as he can consistently hit the semi-finals or the final, then we reckon that he is going to be kicking around in the number 1 position for a long time to come.

One thing is for sure, if he does reclaim his number 1 position at the Miami Open and loses it again, we know he will eventually retake it. We are watching one of the greats develop before our very eyes. Since the ‘old guard’ of Djokovic, Murray, Nadal, and Federer are slowly cutting back on their tournament time, new players will need to replace them. We are confident that you will be hearing about Medvedev for years and years to come.

Previous article
Once a US ally, Honduras ex-president to face justice over drugs
Next article
Panama’s Mangroves, a threatened “resort” for America’s Migratory Birds