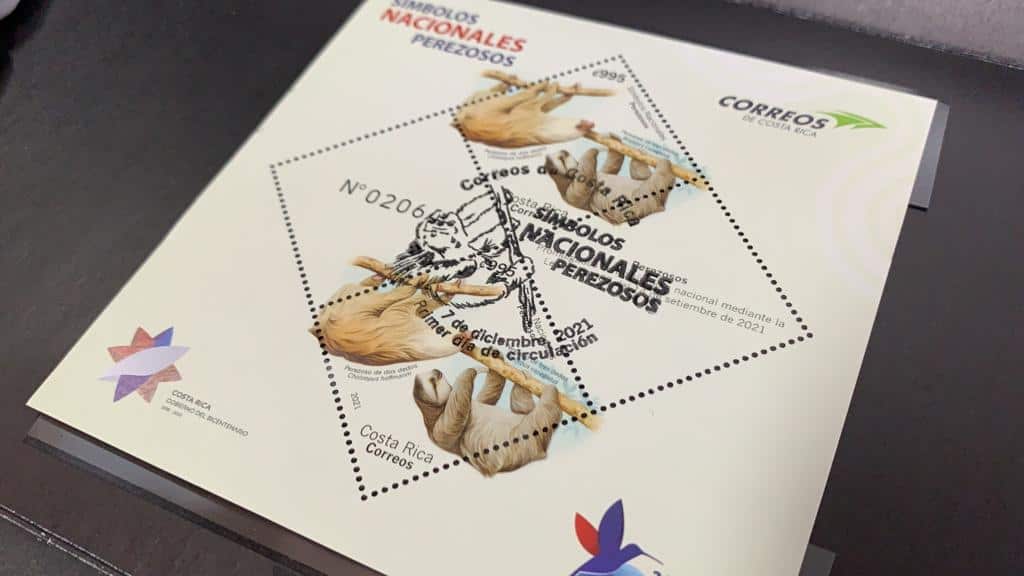 Costa Rica commemorated the issuing of 2 new stamps featuring the two toed (Choleopus Hoffman) and three toed sloth (Barypus Variegatus) at Cahuita National Park. This coincides with the inclusion of the sloth as a national symbol of Costa Rica back in August and the “National Symbols of wildlife of Costa Rica” Law that was enacted

This new law is intended to help ensure the protection of not only the sloth but all national symbols of Costa Rica and are yet another way of promoting the natural beauty of Costa Rica to both national and international travelers alike.

The sloth stamps will travel around the world, carrying with them the opportunity to reflect on the benefits of the protection of forests, vulnerable species, and so many other natural riches that have been given to us to cherish and defend – said Xinia Sánchez, president of the Board of Directors of Correos de Costa Rica.

We are pleased that the image of the sloth will be immortalized on a stamp in the collection of national symbols developed by Correos de Costa Rica and within the framework of the Bicentennial celebrations – added Alberto López, general manager of the Costa Rican Tourism Institute (ICT).

He also recalled that in the past and for about a decade the two- and three-toed sloths were used in the promotion and marketing campaigns of the ICT such as “Vamos a Turistear” at the local level and in “Save the Americans”, “Stop Animal Selfies” (developed in conjunction with minae) and others, aimed at North American tourists and others principal tourist markets.

The design of the postage stamps was worked based on an illustration created by the national artist Alex Núñez, in which both species of sloths are observed hanging from a branch

You can buy these stamps at the Philatelic Office in the Central Post Office building.