The Carao Tree in Costa Rica 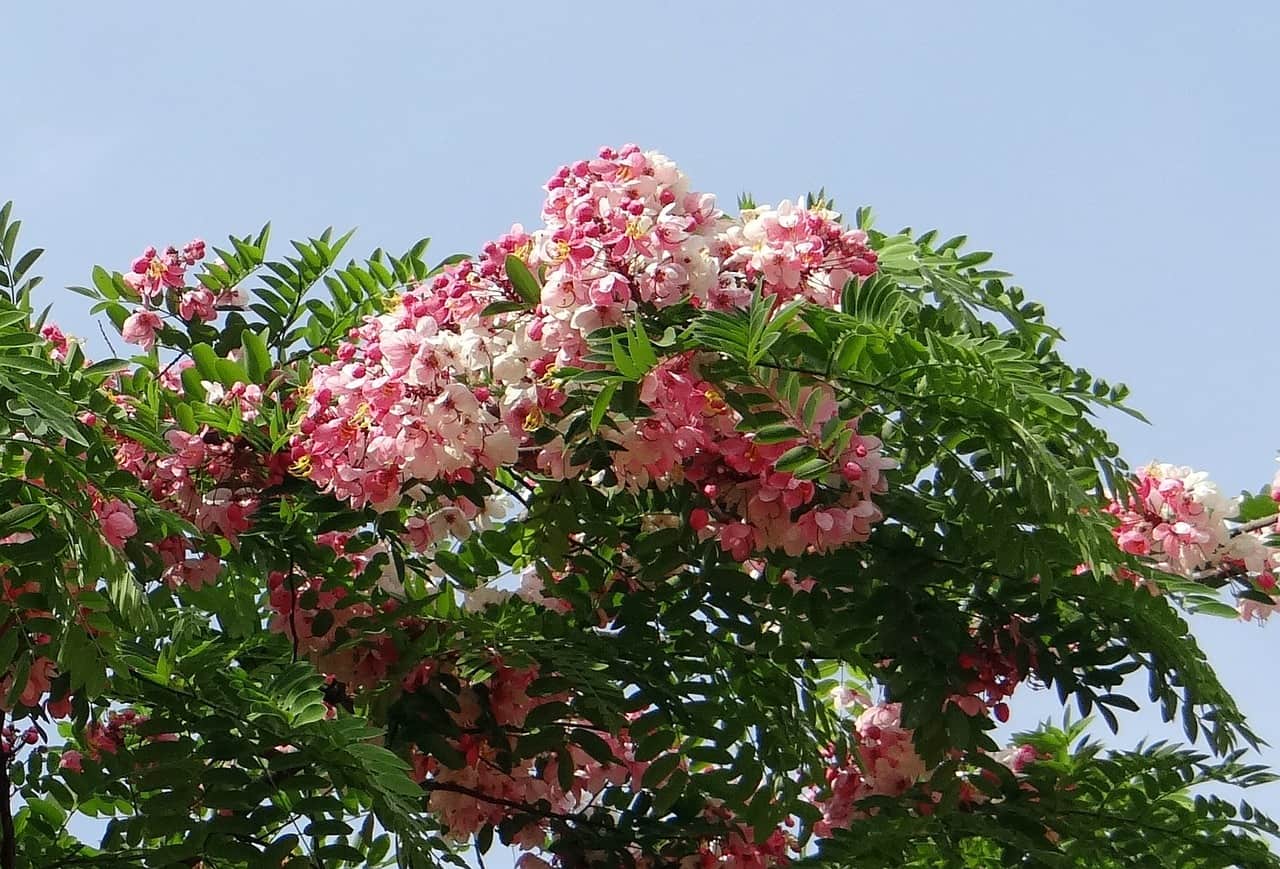 Costa Rica’s landscape is a country sprawling in greenery swallowing you up in all of its beautiful variety of trees. One that stands out is the Cassia Grandis known as Carao in Spanish. Growing from southern Mexico to South America, it is one of the native trees to Costa Rica. It is a perennial towering tree upwards of 20 meters some reaching to 30 meters at times. It is recognizable with its dense umbrella canopy and long cylindrical pods that hang from above.

They begin as green-looking strings and as they age and mature their color transforms to brown becoming dry and wood-like. They are actually the stamens of the flowers that evolve into these pods which eventually fall to the ground.

The Carao tree is one of the several species referred to as the Pink Shower tree as a result of its shades of pastel pink flowering through the grand canopy. Blossoming first as red and progressing to pinks and oranges creating a beautiful display of color amongst the greenery of other trees. They will most often be found growing in tropical dry forests, near the banks of the rivers and streams, some even in flooded areas as well around homes for their decorative appeal.

With a name like Pink Shower tree, one imagines a fragrant appealing odor as you come across this beautiful flowering tree. However, to some, it has taken on another name being referred to as the Stinking Toe tree. Perhaps the name is attributed to the smell that one might be reminded of when in close proximity to its pulp, that of dirty socks or wet sweaty shoes.

Not the most fragrant of Costa Rica’s abundant tree species but it makes up for this unpleasant downfall in many other amazing aspects.

The long pod shape produces an edible fruit that has been used for home remedies for many years. Once you are able to strip the dry black shell, separating the halves, it is soaked for close to 12 hours in order to remove and easily get all the pulp out. It is then boiled and cooled and can take on the consistency of molasses. This is used to make honey carao or miel de carao as you may see in some stores.

It is said to be beneficial to those suffering from anemia and as a remedy for preventing anemia as it is a natural blood builder increasing the production of red blood cells. In addition, it helps the digestive system as it has a cleansing, diuretic, and stimulating effect as a laxative.

Some say that it helps increase energy and endurance and even strengthens one’s immune system for defending against a cold and flu. The most common way to ingest it is as a drink with warm milk almost similar to a tea or some take it with water or orange juice depending on taste preferences.

The Carao trees are known for their ability to grow quickly and are used at times to help with reforestation. The wood is used for fence posts and construction as well as a fuel source. Not only is this multi-faceted tree used for natural remedies such as externally helping to treat ringworm and skin infections on dogs and mange, but in the pharmaceutical sector being used as a binder in the industry.

You can grow this beautiful flowering tree on your land for its miraculous properties or even just for floral ornamental purposes. If you are looking at starting from the beginning you will need to have the seed in near-boiling water to help with the process of their germination.  However, monitor this as you do not want to cook your seeds.

After soak the seeds in warm water anywhere from half a day to a full day. The aim is to have the seeds soak up the water then place them into their seedbeds until they are approximately 4-6 cm. Transplant your seedlings into individual containers as they grow for close to 6 months then they should finally be ready to plant.

Another great way to try and grow them on your own is through the cuttings of the vertical shoots to a length of about 2.5 meters and a diameter of 15 cm. However, you do not want to transplant them immediately you will want them to rest in a shaded area for approximately a week, if there are several shoots have them up laid up vertically, layered for a few weeks after. Once ready to plant put them at a depth of 50 cm into the soil preferably not salty soil as they do not tolerate this well.

They will survive and grow best when exposed to full sun as shade will deter the growth process immensely to a very slow speed. The length of the dry season in your area will also affect the survival and success of the Carao tree. Temperatures should range from 21-26 C, preferring areas with an annual rainfall of at least 1,000 mm as they may see the best growth especially when it comes to flowering.

They tend to adapt well and enjoy wet clay-like soil. However, what is great about this species of tree is its tolerance to drought and its ability to withstand it, acclimating well to a variety of soils.

You will find during the dry season that butterflies, bees, and birds will increase in their visits as the blossoms are a great source of nectar for them during this time.  The canopy is also a great resource for much-needed shade and you will see this at some coffee plantations as well along roadsides.

I am sure many of us have seen these hard pods laying on the ground and probably have even walked on them not realizing the greatness that lies within them. Perhaps you have even seen a monkey banging the hard shell open to get at the carao inside the pods. You might think twice now when driving by the show-stopping carao tree with knew admiration that it is not just a pretty sight but holds much more inside its miraculous pods.

Sarah Jordan
Share
Facebook
Twitter
WhatsApp
Email
Previous articleThe Ultimate Guide to Taxis in Costa Rica
Next articleOxygen shortage due to Covid in Nicaragua: ‘Stand in line and wait for a miracle’