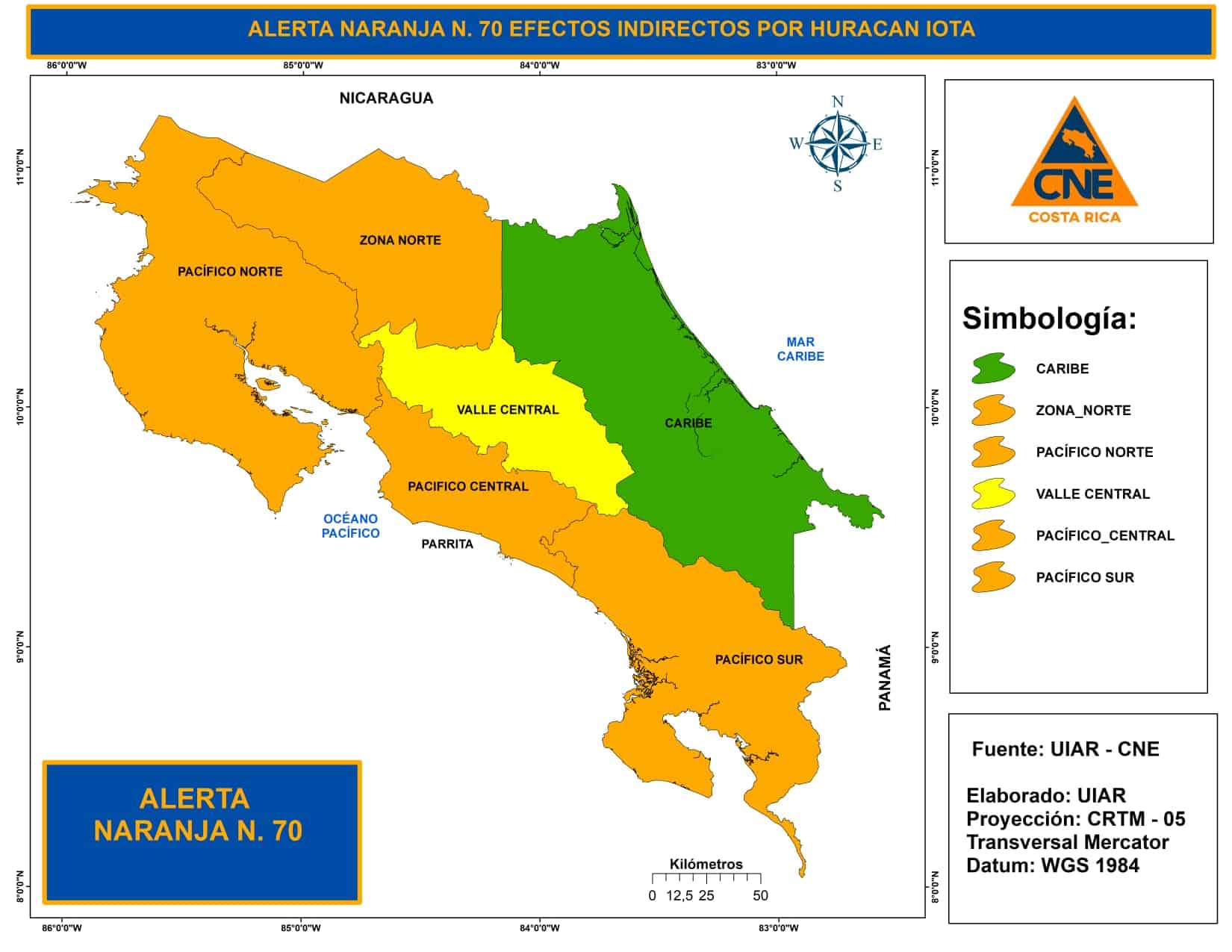 The CNE established Orange Alerts in Costa Rica on November 16, 2020. (via CNE.)

Happy Tuesday from The Tico Times. Once again, we hope you’re staying dry and safe.

Here’s the news you should know today.

Iota made landfall in Nicaragua as a Category 5 hurricane on Monday night. The storm caused “catastrophic winds, life-threatening storm surge, and torrential rainfall” in the same area that was devastated by Hurricane Eta earlier this month. Read more here, and we’ll have much more throughout the day.

Costa Rica’s National Emergency Commission (CNE) placed the Northern Zone and all Pacific regions under an Orange Alert due to the indirect effects of Iota. The Central Valley is under a Yellow Alert. These areas should expect heavy rainfall provoked by Iota. See the header image of this story for a map.

Remember to be alert when driving, as heavy rainfall can flood roads and cause landslides. If necessary, follow local disaster-response recommendations to evacuate. Dial 9-1-1 in the event of an emergency.

The National Hurricane Center (NHC) is tracking a weather disturbance in the Caribbean Sea with a 40% chance of developing into a cyclone. If this formation occurs, Central America could be affected. Read more here.

Route 27 (San José-Caldera highway) is suffering from “accelerated deterioration” after just 11 years in operation, according to the latest report from the National Laboratory of Materials and Structural Models of the University of Costa Rica. Read more via La Nación.

Expect rain today due to Hurricane Iota. Per the National Meteorological Institute: “The country will continue under the indirect influence of Hurricane Iota, a situation that will favor rain scenarios in the national territory, with greater emphasis on Pacific regions, which can manifest themselves from early hours of the day; while in the Central Valley, the North Zone and the Caribbean mountains, the rains will occur in an isolated manner, mainly during the afternoon and early evening hours.”