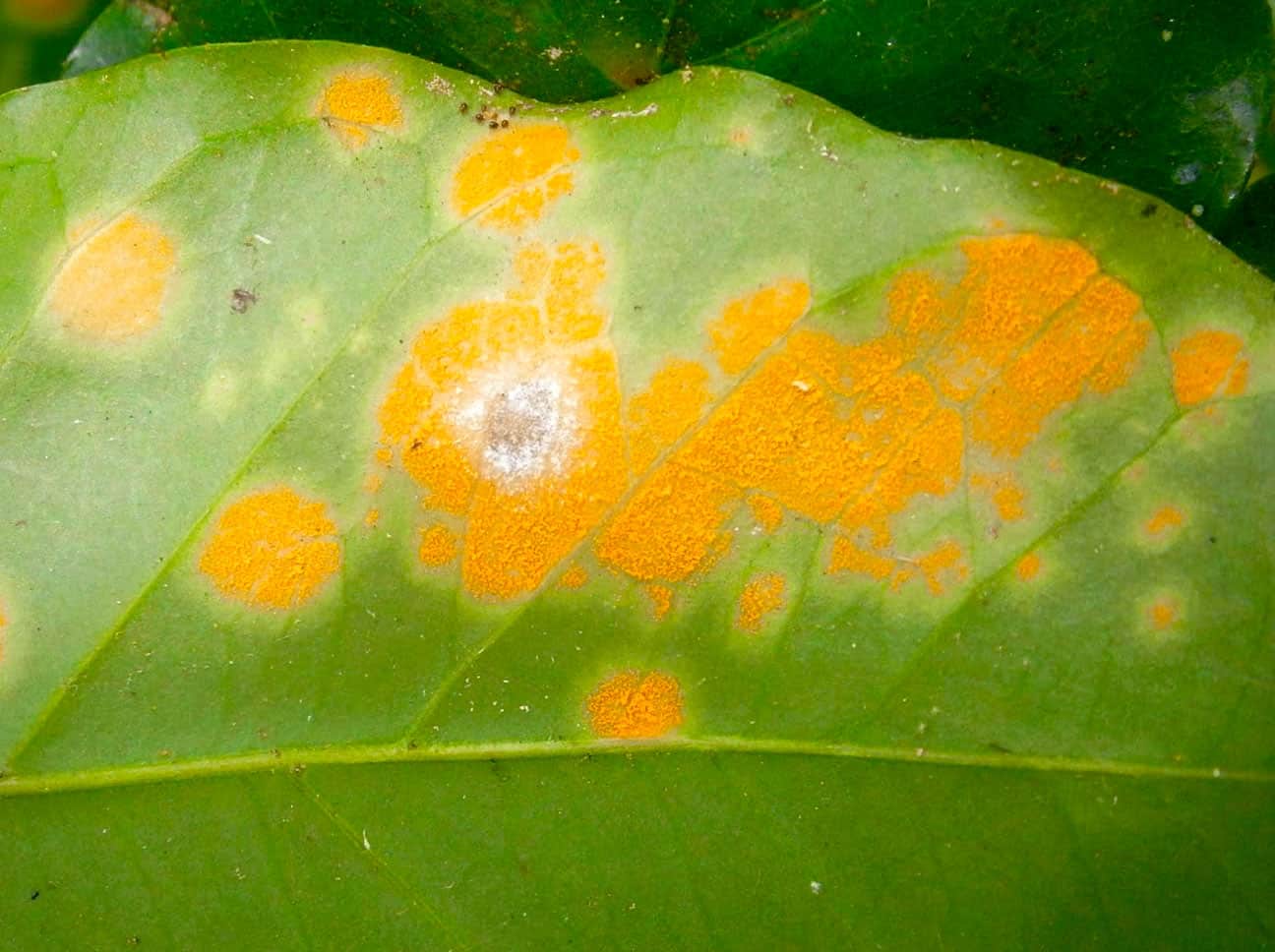 If you are unfamiliar with coffee rust, some rather unappealing images may come to mind. And indeed, coffee rust is a formidable problem for coffee lovers and growers everywhere. Coffee rust, or Hemileia vastatrix, is a fungus that specifically grows on coffee leaves. Coffee rust is one of many types of rust fungi.

Like most fungi, coffee rust goes hand in hand with moisture. Infection occurs when the coffee plants is exposed to moisture for long periods of time, such as heavy rains or dew that is unable to evaporate easily. For infection to occur, the coffee rust spores, called uridiniospores, must have between 24-48 hours of continuous moisture. Therefore, outbreaks of coffee rust generally occur during rainy seasons.

When infected, the coffee tree’s leaves will start to show symptoms in the form of circular, yellow lesions, usually around the edges of the coffee leaf. The underside of the infected area will begin to form a collection of uridniospores as the circular region grows in size. These spores are orange in color and have a rusty appearance.

Eventually, the coffee rust spreads among the leaves and the infected leaves are shed from the plant. This may not kill the plant immediately, but will weaken it dramatically.

Once the coffee rust spores begin to spread, surrounding coffee trees are easily infected and the entire crop can be devastated. The uridiniospores are generally spread by wind or rain, and to a small extent, by insects. While the coffee trees themselves may not die right away, their crop yield will be poor and they will eventually die off.

The origins of coffee rust

Coffee as a drink became popular in Europe during the sixteenth and seventeenth centuries. So, when the English took control of Sri Lanka in the nineteenth (Ceylon at the time) and found that conditions were good for growing coffee, they turned the island into the biggest coffee producer in the world. Sri Lanka was exporting 100 million pounds of coffee per year before its crops were compromised by coffee rust.

Coffee rust is now found in all of the world’s coffee producing regions except Hawaii, but it was not always that way. Coffee rust was first reported in the East African coffee trees around Lake Victoria in 1861 and likely originated in the area. A few years later, in the late 1860’s, coffee rust began to take its toll in Sri Lanka, although it is not known how the disease was spread all the way from East Africa.

Initially a coffee empire, Sri Lanka suffered a dramatic decrease in coffee production by 1886. Coffee rust devastated coffee crops so badly that the British colonists decided to plant tea instead, leading to the now common association with the British and tea. Tea is still one of the main exports of Sri Lanka.

For many years, the scourge of coffee rust was confined to Africa and Asia. Since wind and rain can only carry the rust spores so far, the Western world’s coffee crops were temporarily safe from the fungal infection. Then, in 1970, coffee rust appeared in the northern coffee producing states Brazil.

No one is certain how the disease spread all the way across the ocean, but it is likely that is was transferred from plants brought over from Africa or Asia. Coffee rust has since spread to all of the coffee producing regions in the Americas and is now a major threat to coffee production everywhere coffee is grown.

Along with spread of coffee rust come the major ramifications on the production of coffee and the livelihood of the local economies of coffee producing states.

Throughout the period of 2008 to 2013, several countries in Central and South America experienced coffee rust epidemics. Researchers noticed that these epidemics followed either decreases in the price of coffee or increases in the price of fertilizer, both leading to less money invested in keeping the coffee plantations healthy and pest-free. This likely led to a higher susceptibility to problems like coffee rust.

Colombia was reported to have a reduction in coffee harvest by 31% from 2008-2011, and in 2013-2014, El Salvador suffered a massive 54% reduction of their coffee harvest.5  Much of Central America had also suffered extreme losses due to coffee rust during this time period.

The unfortunate socio-economic result of this epidemic was a hard financial hit to farmers and the loss of jobs for thousands of laborers, which led to overall food insecurity and a reduction of livelihood for many families across Central and South America. The shortage of coffee bean production across so many regions also resulted in a price increase of the product in other countries.

After such a blow to coffee farmers across the region, efforts to improve coffee rust prevention methods became an ever important area of research. Learning from the mistakes in fertilization methods, pest and disease prevention methods, and general care of the plants could help prevent future outbreaks of coffee rust that could result in similar socio-economic impacts, or worse.

One of the possible outcomes of further coffee rust outbreaks is a switch from the current popular Arabica (coffea arabica) species of coffee plant to the less common robusta (coffea canephora) species. Arabica is considered to have a more desirable taste than its harsher cousin, but the robusta variety tends to be more resistant to coffee rust, making it a viable replacement.

There are multiple ways to go about the prevention and mitigation of coffee rust. The conventional prevention method is similar to the prevention of any plant disease or pest, which includes fertilization to ensure a healthy, disease resistant plant and fungicides to keep coffee rust at bay.

While effective, this type of fungicide can be harmful to the local wildlife and ecosystem, and some farmers opt only to use them once coffee rust has already been spotted among their crops.

Another important part of coffee rust prevention is ensuring that the coffee leaves are not wet for long periods of time. Methods to prevent dew and rain accumulation include pruning, weed control, and more spacing between plants to encourage air flow.

Planting in full sun is also an option to help water dry faster, although there is some disagreement on whether it is better to let the plants dry with more sun exposure or to allow the coffee trees to be in a multi-layered canopy which can reduce the amount of rain hitting the coffee trees in the first place. The latter method can also prevent soil erosion and runoff from the rain.

However, arabica-robusta hybrids may not be the long term answer. Much like the flu in humans, there are different strains of the coffee rust fungus and they may be able to evolve into strains that can attack these new resistant breeds of coffee eventually. Durable resistance may be a possibility with continued research on the genetics of different coffee species.

Coffee rust is not currently a curable disease, so once it is found on a coffee plantation, quarantining may be the only option to prevent further damage and spread of the disease. Quarantine protocols might include sectioning off or killing the infected plants and even those around it that may not be showing any symptoms. Ideally, this occurs before the rust is spread by the wind or rain to protect nearby plantations.

Hawaii is the only coffee producing region in the world that has not had any reports of coffee rust. As such, Hawaii has strict quarantine procedures for any imported coffee or coffee plants and they only plant locally grown coffee.

Hawaiian officials even suggest discarding or thoroughly washing all clothing and footwear worn to other coffee producing regions before re-entering Hawaii. These guidelines are crucial in preventing spread of coffee rust.

The future of coffee

Although coffee rust is a serious threat, the future of coffee is probably not as bleak as it sounds. Groundbreaking research is being conducted at places like Cenicafe in Colombia to find the best ways to prevent new outbreaks of coffee rust and mitigate effects of the outbreaks that do occur.

New hybrids that preserve the taste of the familiar arabica coffee are being created with more resistant genes, and coffee farmers are finding the best ways to deal with the problems created by coffee rust by studying past outbreaks and finding ways to recognize warning signs of possible outbreaks. Overall, it seems that coffee will be around for years to come.