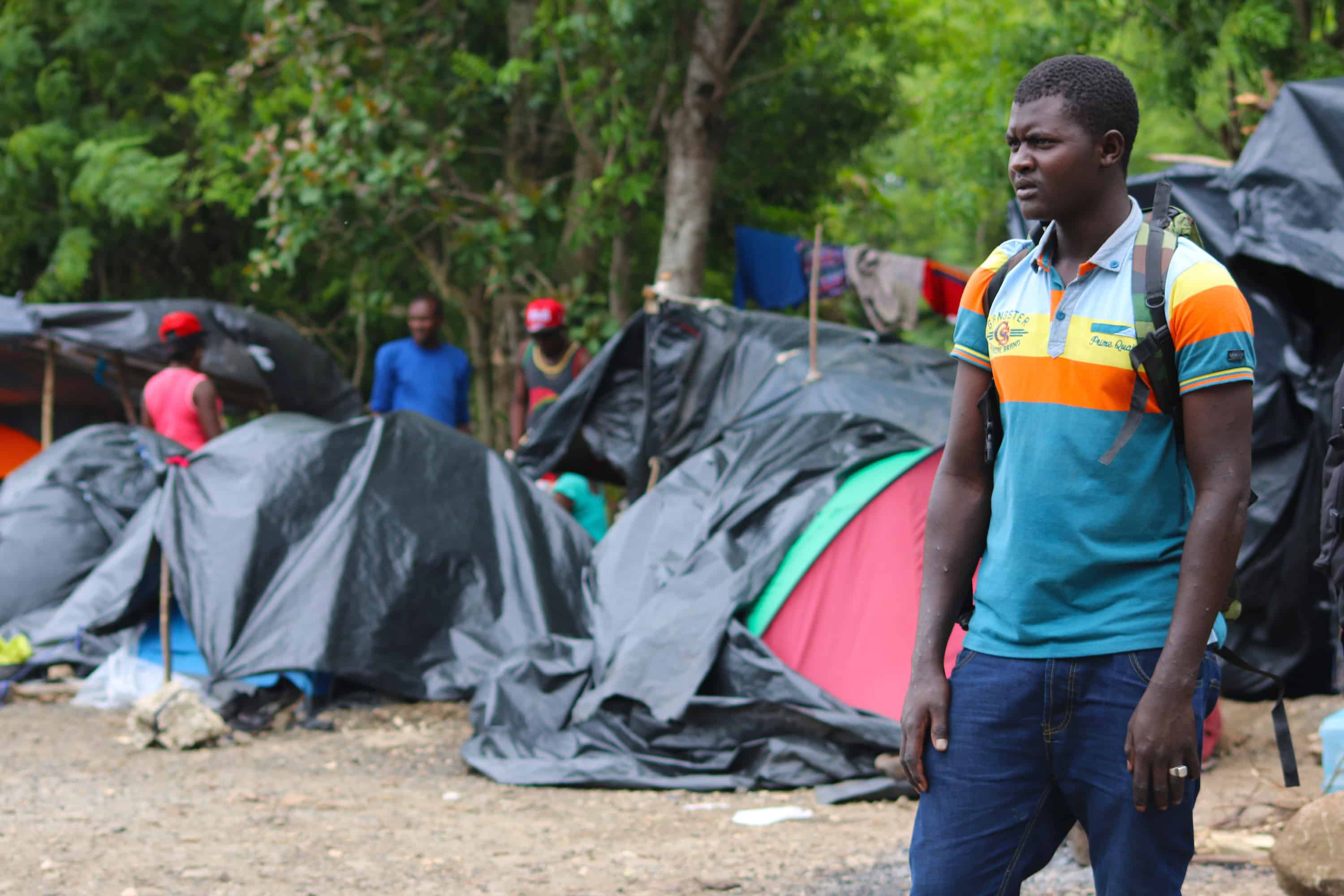 PEÑAS BLANCAS, Guanacaste — Almost 200 migrants from Africa, Asia and Haiti have set up camp in a small field here, not far from Costa Rica’s border with Nicaragua. The conditions are unhealthy: While some have tents, many sleep on the ground with only plastic tarps for protection from the rain.

“We eat what people give us. We have no money because it’s been stolen. We live like animals,” Talib, a 39-year-old migrant originally from Angola, tells The Tico Times.

In Peñas Blancas, migrants charge their cell phones for a dollar so they can stay in contact with relatives back home or in the United States. For another dollar they can use a bathroom, and for $10 they can rent a small room that keeps them out of the downpours that are a daily occurrence this time of year. This is the reality for hundreds of so-called “extra-continental” migrants marooned in Costa Rica on their way north to try to get into the United States.

Earlier this week, The Tico Times reported on conditions at the Red Cross camp in Paso Canoas, on Costa Rica’s border with Panama, where a steady flow of undocumented migrants has been showing up daily for the past several months, many of them exhausted from their journey through South America.

In Paso Canoas, the government registers migrants and gives them a document that allows them to travel freely through Costa Rica as long as they check in with authorities every 15 days.

See also: Deporting 600 migrants back to Africa could be expensive, and impossible

Many continue north to Costa Rica’s northern border, only to find that crossing into Nicaragua is a vastly more difficult task.

Nicaragua has maintained a hardline stance against letting migrants without visas pass through the country. Many of the migrants have sought out human smugglers to get them across the border, with varying degrees of success.

Earlier this week, police in Costa Rica helped dismantle a regional human trafficking ring dedicated largely to smuggling people from Africa and Asia through Latin America to the United States. Little Africa on the border

Some of the migrants in Peñas Blancas have been in Costa Rica for three months and have run out of money to continue their journey. The going price to hire a coyote to smuggle people into Nicaragua is around $600, migrants here say. But they also say that many of the smuggling offers are a hoax, and migrants frequently end up getting robbed.

Still, migrants walk through the streets of Peñas Blancas with backpacks on, hoping that somehow Nicaragua will change its mind and let them continue on their way north.

“We live like animals,” a man named Fadwa, who says he’s from the Congo, says in French. “Please let us pass, we want to continue.”

Many migrants have told Costa Rican officials that they’re from Congo, but often can’t specify whether they’re from the Republic of Congo or the neighboring Democratic Republic of Congo. It’s one of the reasons immigration officials suspect that many are actually from Haiti but hiding their nationality for fear of deportation back to the relatively close island.

Regardless of where they’re originally from, many of the migrants started their journey through the Americas in Brazil. The smuggling ring busted this week was purportedly led by a Guatemalan but had links throughout the Americas and abroad.

Paying customers were reportedly picked up in Dubai, flown to Brazil and then brought up through the Americas to the U.S. mostly by land. Authorities said that once in Mexico, many of the migrants were forced to smuggle drugs into the U.S.

A total of 35 people have been arrested in the trafficking case.

See also: On patrol with the Costa Rican Border Police

The migrants in Peñas Blancas know the dangers of entrusting their lives to smugglers. They tell of women getting beaten and raped, and migrants getting violently robbed.

It’s hard to know how many of these stories are true. Much of Costa Rica’s border with Nicaragua is sparsely populated, and border police can’t possibly monitor the entire territory.

But the squalid living conditions of the migrants camped out in Peñas Blancas is undeniable. While the Costa Rican government lobbies for a regional solution to the problem, migrants’ funds are drying up, the resources of the charities that feed them are increasingly strained, and the rains promise to become even heavier in the coming months.