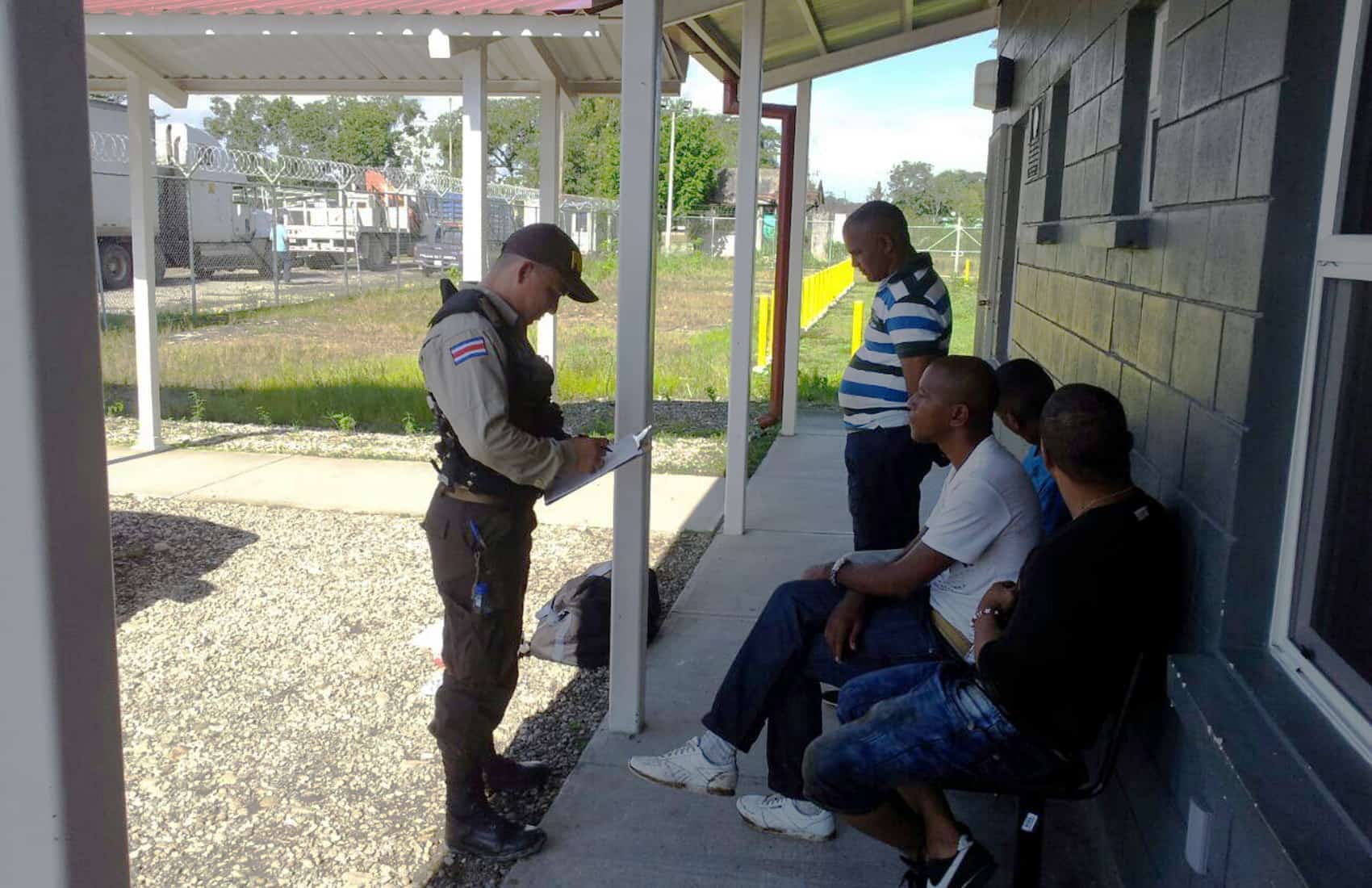 Authorities arrested 13 people in eight raids across the country in connection with an international criminal operation dedicated to smuggling Cuban migrants north to the United States. A wailing woman is heard offscreen — “por favor, no” — in a shaky video shot by police.

The Tuesday raids uncovered 14 Cuban migrants in five homes on the compound, the latest group rounded up after police stopped a bus with 44 migrants on its way across the border on Sept. 25.

News of a rapprochement between the U.S. and Cuba in December 2014 drew cheers from many observers but also set off a surge of emigration from the island to the United States. Images of improvised rafts crossing the Straights of Florida have become iconic of Cuban emigration to the U.S. since the Mariel boatlift of 1980. But the majority of Cubans entering the U.S. today choose the overland route through Central America — including Costa Rica — to reach family or a new life in the U.S.

While Cubans are routinely stopped while traveling through Costa Rica, this year immigration authorities have seen a jump in their numbers. As of September, 12,166 Cubans have been stopped by Costa Rican authorities so far this year — a 24,232 percent increase over the roughly 50 Cuban migrants caught in 2011, according to figures from the Immigration Administration.

Immigration Administration Director Kathya Rodríguez told The Tico Times that one of the possible motives behind the recent spike in the number of Cubans traveling illegally through Costa Rica to the U.S. was fear that warming relations between the Cold War foes could lead to a change in the U.S.’ favorable immigration policy toward people from the island. The Mariel boatlift: A May 1980 file photo shows boats leaving the port of Mariel, Cuba, for the United States. That year some 135,000 Cubans immigrated to the U.S. AFP

Thanks to the Cuban Adjustment Act of 1966, Cubans looking to legally immigrate to the U.S. need only arrive at a port of entry and pass a background check and other inspections. After a year in the U.S., they can apply for permanent residency and eventually citizenship. In 1994, the Clinton Administration announced a change in its enforcement of the Cuban Adjustment Act that came to be known as the “wet-foot, dry-foot” policy. This meant that most Cuban migrants intercepted at sea would be sent back to the island, while those who made it to U.S. soil generally would be allowed to stay.

The Pew Research Center reported in October that 27,296 Cubans entered the U.S. during the first nine months of the 2015 fiscal year, which ended on Sept. 30 — a 78 percent increase over the 15,341 who entered during the same period the previous year, according to U.S. Customs and Border Protection data obtained through a public records request.

The vast majority of those migrants entered through the U.S. Border Patrol’s Laredo Sector in Texas, on the Mexican border, according to the Pew Center. These immigrants are sometimes called “dusty-foot” Cubans by U.S. border patrol officers, said Marc Rosenblum from the Migration Policy Institute, a Washington, D.C.-based think tank. During the first nine months of fiscal year 2015, 18,397 Cubans came through the Laredo crossing, a 66 percent increase from the same time period in the previous fiscal year.

A total of 7,167 Cubans successfully crossed by sea to reach the Miami area during the first nine months of fiscal year 2015 compared to 2,992 the previous year.

Story continues below the infographic.

But before Cuban migrants reach Laredo or another U.S. port of entry, many start their journey thousands of miles away in Ecuador. Rodríguez said that Ecuador is a common entry point for migrants because the Andean country has a very liberal immigration policy that allows many travelers to enter without a visa. From there, the migrants begin the irregular part of their trip, traveling north through Colombia, Panama and the rest of Central America before reaching Mexico.

As strange as it may sound, the long, overland journey through South America, Central America and Mexico may be the safer alternative for emigrating Cubans than the Straights of Florida. Marc Rosenblum from the Migration Policy Institute told The Tico Times that the circuitous path from Ecuador is risky but the increasing numbers of Cubans reaching the U.S.-Mexico border is a testament to its popularity.

Another reason might be that Cubans caught on the way have a better chance of continuing north. Rosenblum said that the countries Cuban immigrants pass through on the route lack the financial resources to deport them back to Cuba, and the island’s government can complicate the repatriation process. If the Cuban government does not issue travel papers for the detained to return to the island or draws out the process, the cost of housing the migrants can become prohibitive and the transit country often releases them, he said.

Immigration Administration Director Kathya Rodríguez said that migrants who illegally enter Costa Rica are often issued a summons to report to San José on their own to begin the deportation process. Not surprisingly, many migrants simply tear up the citation and continue northward. Those who are deported but not returned to Cuba are sent to Nicaragua, which has been designated to receive Cuban migrants.

“Many have money from their families in the United States who finance part of the trip, and these networks are interested in capturing part of this money,” Rodríguez said. The cost can run as high as $15,000, according to the Prosecutor’s Office.

“What we’re most concerned about is the safety of these people [Cubans] because they are attractive to human smuggling networks,” Rodríguez said. “Unfortunately, there’s no certainty that the people picking them up will do what they say.”

Rosenblum said there have been rumblings in the U.S. Congress, especially from conservative Republicans, to eliminate the Cuban Adjustment Act. Rep. Paul Gosar (R-Ariz.), for example, recently presented the “Ending Special National Origin-Based Immigration Programs for Cubans Act of 2015,” a bill that would revoke Cubans’ fast track to permanent residency.

Despite the congressional rumblings, Rosenblum said he didn’t think the bill would gain much traction. While some Cubans seem to be rushing to start their trip to the U.S., Rosenblum said he hasn’t seen any significant movements in any direction when it comes to changing the Cuban Adjustment Act.

Rep. Gosar presented his bill on Oct. 23. A week later, on Oct. 29, Costa Rican police apprehended 13 more Cubans outside Liberia, Guanacaste, traveling north, trying to reach the U.S. before Gosar and others make it harder for them.

But until that day comes, the incentive remains attractive for Cubans looking for a better life to keep trying to cross through Costa Rica and other Central Americans countries.

Alejandro Zúñiga - Apr 02, 2020
Do NOT follow this link or you will be banned from the site!