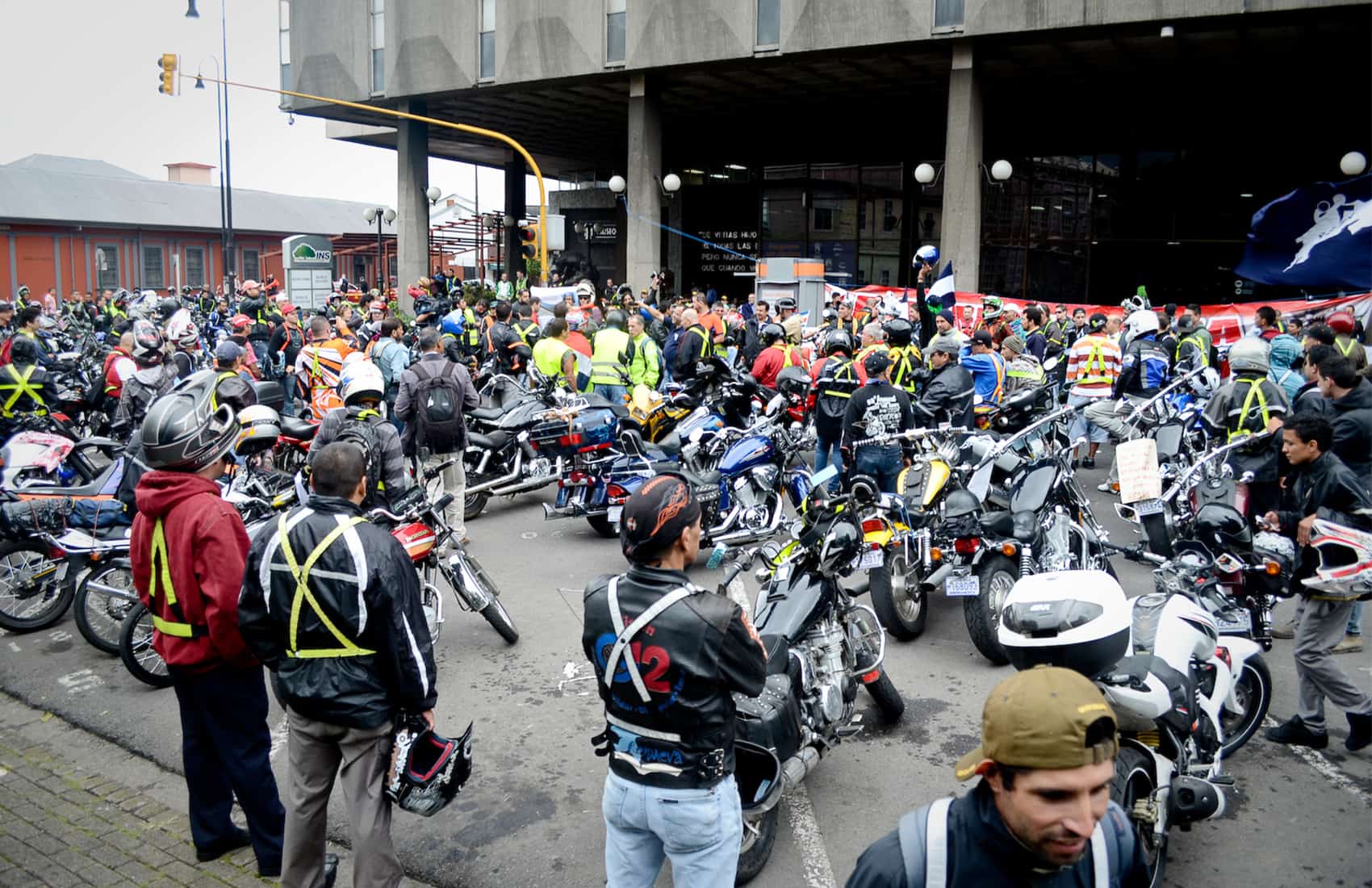 Motorcyclists plan to gather in front of the National Insurance Institute in Barrio Amón then caravan to the Legislative Assembly and the Judicial Investigation Police on March 18, 2015. (Alberto Font/The Tico Times)

Traffic in downtown San José could get complicated Wednesday evening. The National Motorcyclists’ Civic Committee announced they will hold a public demonstration to protest proposed regulations prohibiting more than one person on a motorcycle, among other changes.

Criminals riding motorcycles have shot 45 people dead in the past year, officials say.

Leaders of the motorcyclists’ committee are calling on all riders to gather starting at 5 p.m. outside the National Insurance Institute (INS) in Barrio Amón. Then they plan to caravan to the Legislative Assembly and the Judicial Investigation Police (OIJ) to deliver petition letters.

During a press conference last week Segura said it was “urgent for the Legislative Assembly to approve amendments and regulations to reduce crimes committed by motorcyclists, which have spiked in recent weeks.”

Camacho said all modifications will be analyzed with caution, as they involve changes in citizens’ rights.

“We know that the vast majority of people use motorcycles to work, to transport relatives or for recreation. In that sense we are willing to dialogue about the reforms,” he said.

Along with prohibiting more than one person on a motorcycle, Segura proposes banning motorcyclists from wearing balaclavas or using dark helmet visors. He also wants to make it mandatory to display license plate numbers on vests and helmets, and to increase the size of motorcycle license plates.

And he wants stricter regulations on carrying weapons.

According to Segura, 45 people have been shot dead by motorcyclists since the beginning of 2014. Last year OIJ received 1,738 complaints of assaults committed by individuals driving motorcycles, and so far this year they’ve received 251 complaints.

“(Segura’s) initiative mostly is aimed at strengthening the prevention of robberies and homicides committed with the help of motorcycles,” Chavarría said following Segura’s news conference last week. He said requiring license plate numbers to be displayed on vests was especially important, and said they should appear on the back and front of vests.

On Tuesday afternoon, Public Security Minister Gustavo Mata Vega said he supports most of Segura’s proposals. Regarding the ban on passengers, Mata said it has to be carefully evaluated to avoid violating Constitutional rights.

That proposal is motorcyclists’ main complaint. Eugenio Badilla Quesada, who leads the National Motorcyclists’ Civic Committee, told The Tico Times that the rule “would affect thousands of families who only have a motorcycle as transportation.”

The group also argues that the proposed ban contradicts most motorcycle specifications, which say the vehicles are for two passengers. Badilla said the two-passenger limit “is even stipulated in the vehicle circulation permit collected by INS every year.”

As for the other proposals, the motorcycle leader said they are ineffective “as any hitman can print a fake license plate number on a helmet and a vest.”

Badilla said Wednesday night’s protest “is not intended to affect traffic in the capital. (But) we might drive around San José depending on the responses we get from lawmakers and from Francisco Segura.”