As oil plummets, Venezuela goes from bad to worse 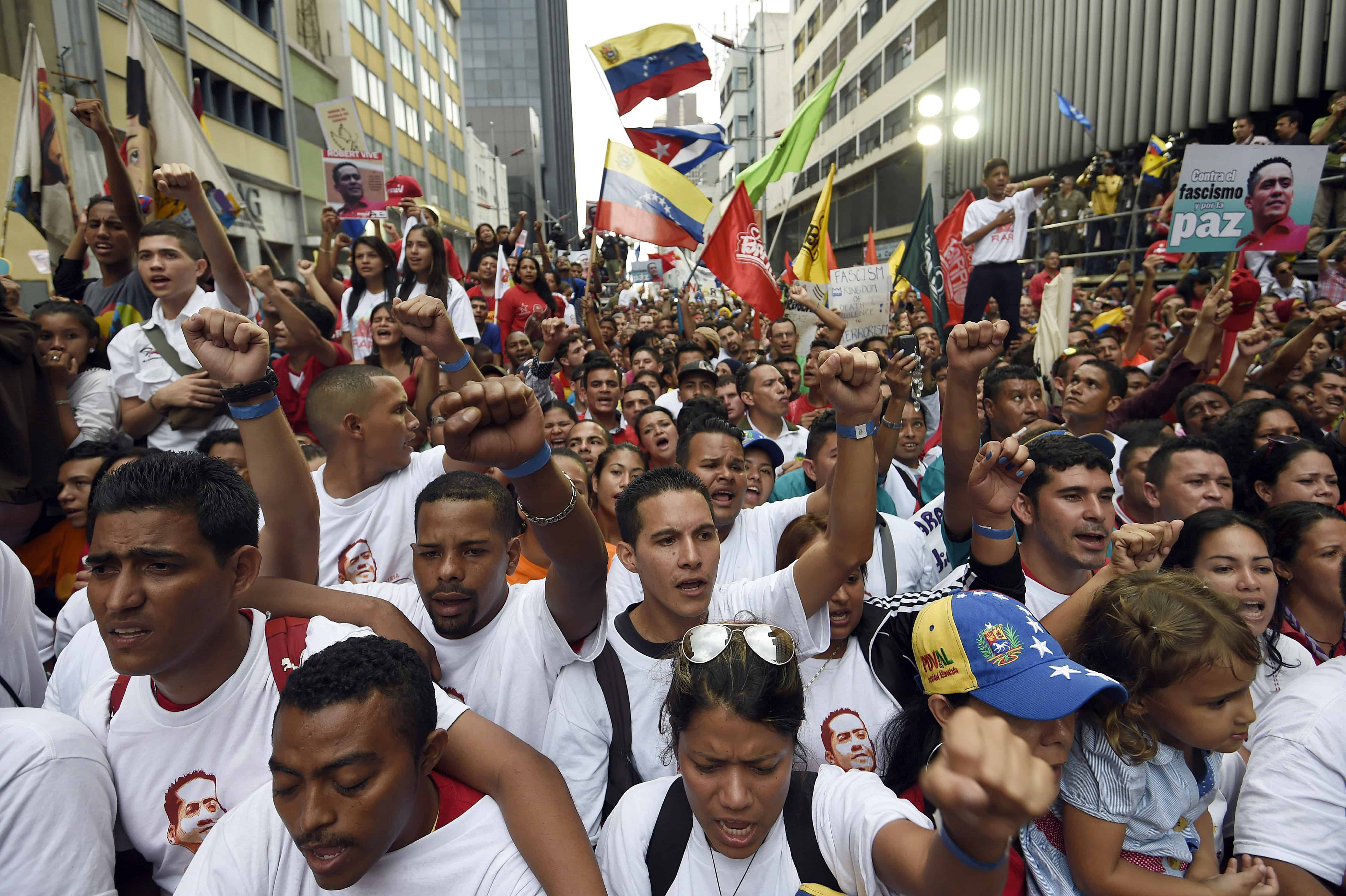 Supporters of Venezuelan President Nicolás Maduro hold a demonstration in Caracas on Oct. 18, 2014. Thousands took to the streets of the Venezuelan capital in seperate demonstrations supporting and opposing the Maduro administration. (Juan Barreto/AFP)

CARACAS, Venezuela — Since becoming Venezuela’s president 18 months ago, Nicolás Maduro has contended with chronic shortages of everything from toothpaste to medicine, the world’s fastest inflation and sinking foreign reserves.

His predicament is about to get worse. Prices for Venezuela’s oil, which accounts for 95 percent of the nation’s exports, are tumbling to a four-year low and threatening to choke off the export dollars the country needs to pay its debts.

“It’s a direct hit on tax revenues,” Lars Christensen, chief emerging-markets economist at Danske Bank, said by telephone from Copenhagen. “There is nothing good to say about the state of Venezuela’s economy, and this isn’t helping.”

The slump in oil prices comes as Harvard University economists Carmen Reinhart and Kenneth Rogoff warned this week that Venezuela is almost certain to default on its foreign-currency bonds. Deepening concern the South American country will renege on its debt payments triggered a selloff in its $4 billion benchmark bonds due 2027.

Venezuela’s Information Ministry didn’t respond to an e-mail seeking comment, and a media official for the state oil producer Petroleos de Venezuela declined to comment on the potential impact of falling oil prices.

Venezuela has enough resources in bolivars and foreign currency to meet all of its obligations, Maduro said on state television on Oct. 9.

A day later, he gave instructions to ask for an emergency meeting of the Organization of Petroleum Exporting Countries, Venezuela’s foreign ministry said on its Twitter account.

The price of Venezuela’s oil basket has declined 18 percent from a nine-month high in June to $82.72 per barrel, the lowest since December 2010. The decline is in line with the drop in benchmark Brent crude prices sparked by a combination of a slowing global economy and rising world output.

“This is a huge shock for Venezuela more than for any other country,” Alberto Ramos, chief Latin American economist at Goldman Sachs Group, said by phone from New York. “They have to either adjust spending or print more money, and if they print more money that means their hyper-inflation gets even more hyper. Inflation is already running at a very high level and completely unanchored, so this is like a wildfire.”

Consumer prices rose 63 percent in the 12 months through August, the most among 85 countries tracked by Bloomberg. Venezuela had a budget deficit worth 16.9 percent of GDP last year.

The drop in crude prices will reduce government revenue in Venezuela by about $10 billion a year, according to Francisco Rodriguez, an economist at Bank of America

Oil taxes accounted for about 30 percent of central government revenue last year, below the 41 percent five-year average. PDVSA’s operating surplus accounted for 17 percent of revenue from government-owned companies, compared with an average 26 percent over the last five years, according to a regulatory filing.

Still, he recommends investors buy Venezuelan bonds, since Maduro could offset the decline by cutting gasoline subsidies or devaluing the currency.

“Even at this oil price, the likelihood of a Venezuela default is much lower than implied by current bond prices,” he said by phone from New York.

The cost of protecting Venezuela’s debt against non-payment with five-year credit-default swaps, already the highest in the world, soared 2.13 percentage points this week to a five-year high of 19.89 percentage points yesterday, according to data provider CMA.

The level implies a 75 percent chance that Venezuela will default in the next five years.

Venezuela paid back $1.5 billion of debt that matured Oct. 8, reducing foreign reserves to an 11-year low of $19.8 billion.

The country’s dwindling cash and billions of dollars in arrears prompted Reinhart and Rogoff to suggest in a column published by Project Syndicate on Oct. 13 that Venezuela is better off defaulting.

“Given that the government is defaulting in numerous ways on its domestic residents already, the historical cross-country probability of an external default is close to” 100 percent, they wrote in their article.

Venezuela, whose economy will shrink 3 percent this year, owes about $21 billion to domestic companies and airlines, according to Caracas-based consultancy Ecoanalitica.

“Under normal circumstances this would be a negative shock,” Goldman Sachs’s Ramos said. “It’s a major oil producer, and this is a major loss of income.”