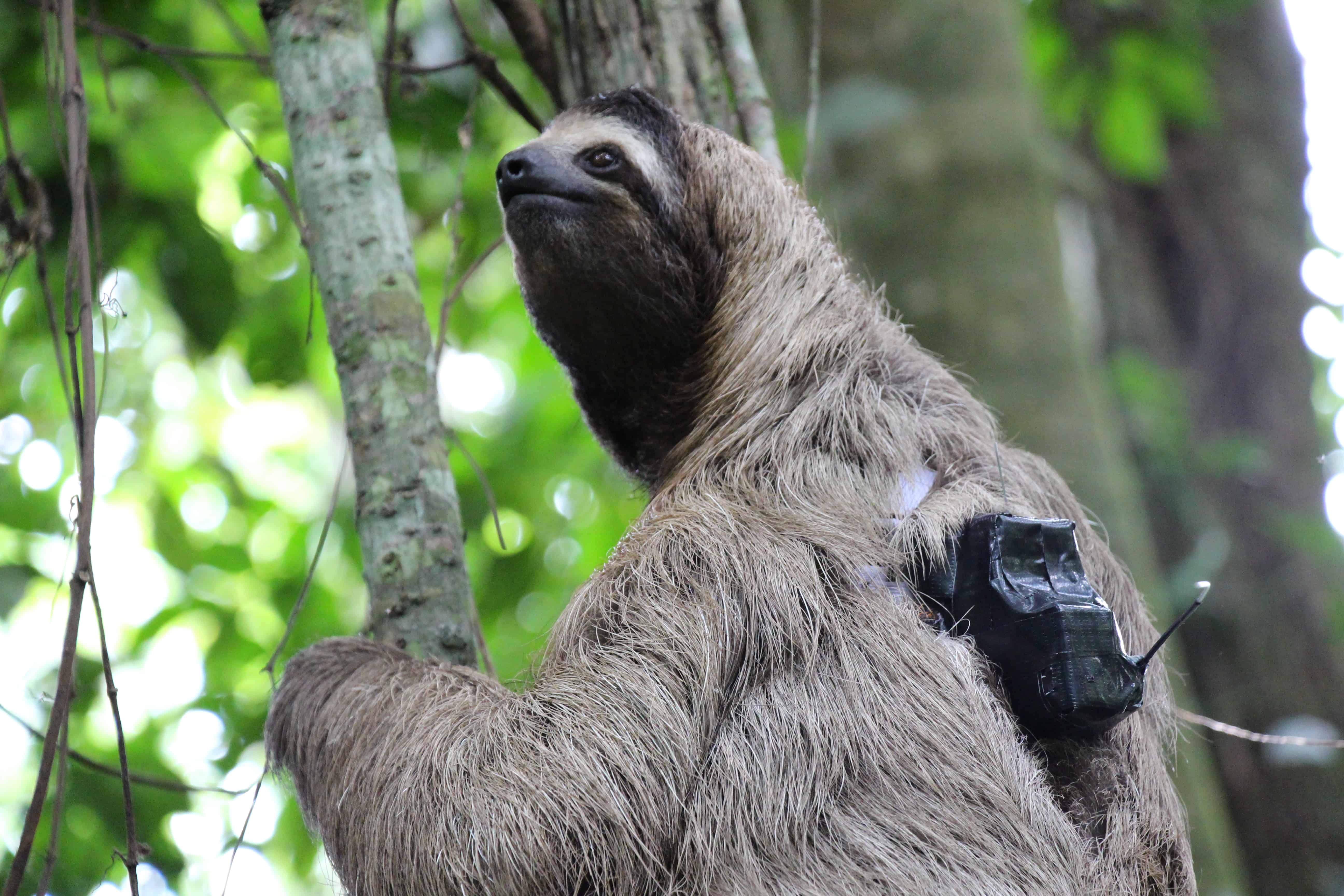 A sloth wearing a daily diary climbs a tree near Cahuita in the Costa Rican Caribbean region. ((Courtesy of Rebecca Cliffe))

Long before a teary-eyed Kristen Bell professed her love for sloths on daytime television, catapulting the slow-moving creature into Internet superstardom, the sloth may have been one of the most hated creatures on earth.

Early European settlers in the Americas couldn’t seem to find anything nice to say about the now-adored mammals, and in early accounts of the New World, naturalists labeled sloths with slurs like imperfect, deformed, grotesque and defective monster. Even the encyclopedias denounced sloths.

“The sloth is the lowest form of existence. One other defect added to the number would have totally prevented their existence… the degraded species of sloths are perhaps the only creatures to whom nature has been unkind.”

Scientists’ centuries-old disdain for sloths did little to generate interest in studying the animals, and today biologists know very little about sloths. Now, the Sloth Sanctuary of Costa Rica, near the town of Cahuita on the Caribbean coast, hopes to change that with their resident researcher Rebecca Cliffe, a zoology PhD student from Swansea University in the U.K. who is on her way to becoming the world’s first dedicated sloth researcher. Rebecca Cliffe fits a sloth with a daily diary to track its movements through the canopy. (Courtesy of Rebecca Cliffe)

But to learn anything at all, Cliffe needs to observe sloths in their natural habitat, a tricky task since the arboreal mammals spend almost all of their time in the tops of rain forest canopies. In order to get a peek into the treetop lives of sloths, Cliffe has been fitting wild sloths with what she calls a “sloth backpack.”

Originally designed to monitor penguins swimming beneath ice, the sloth backpacks — known by zoologists as daily diaries — can track sloths when they are out of reach in the trees. The packs carry a GPS, an accelerometer and a compass, which sense the wearer’s every move, collecting a million data points over each eight-hour period. Once the data from the GPS is downloaded, a supercomputer assembles a 3-D image of the sloth in Google Maps, which shows exactly what the sloth was doing at any given moment.

Using the sloth backpacks has proven challenging for Cliffe and the sloth sanctuary. Along with the hefty price tag — each daily diary costs about $800 — Cliffe also has to wait for a sloth to be within her reach before fitting it with a backpack, or retrieving the equipment and the data later on. Typically, sloths head down to the forest floor only to defecate, and with the ability to store up to one-third of their body weight in waste, sloths only need to answer nature’s call about once a week.

“It is really difficult to get my data back,” Cliffe said, “but when I do, it is amazing.”

Now, three years into the project, that data is starting to solve mysteries about sloths’ anatomy, like how the animals breathe upside down.

According to Cliffe’s data, sloths spend up to 90 percent of their lives hanging upside down. For any other creature, this topsy-turvy lifestyle would eventually cause their vital organs to collapse onto their lungs, but sloths have evolved with a way to keep their organs in place. Fibrous adhesions inside sloths’ bodies work as a kind of biological glue, sticking a sloth’s vital organs to its ribs.

While the adhesions discovery answered a longtime question, Cliffe’s real interest is in sloths’ digestive systems.

“It takes them 30 days to digest one leaf,” Cliffe said. “This raises questions about how sloths are able to prevent themselves from eating too much of a toxic leaf if the effects are so far from immediate.”

That burning question has been the biggest stumbling block for the Sloth Sanctuary of Costa Rica’s rehabilitation program, which takes in hundreds of orphaned baby sloths. Researchers at the sanctuary have not yet figured out how to teach the baby sloths not to eat poisonous leaves. During the sanctuary’s first trial release program of 100 orphaned sloths, all of them died from eating toxic leaves.

“The ultimate plan is to finish the research with the backpacks and trial another release program,” Cliffe said. “We want these sloths safe and back out in the wild.”

This is the first installment in our new monthly wildlife column from Tico Times staff writer Lindsay Fendt. Stay tuned the first Saturday of each month for more glimpses into Costa Rica’s extraordinary biodiversity.