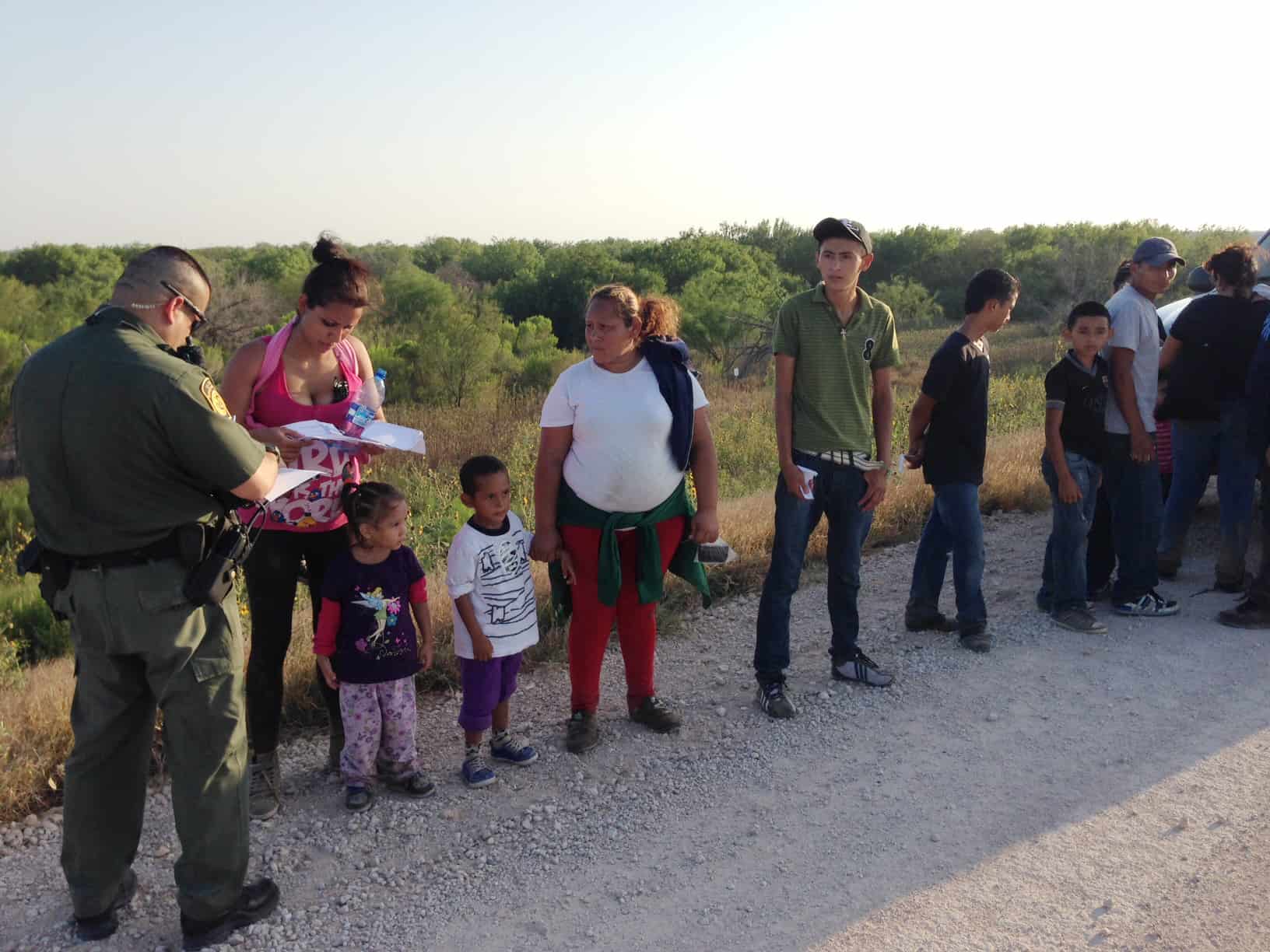 A group of migrants, mostly women and children, turn themselves into the McAllen Border Patrol after illegally crossing the Río Grande near McAllen, Texas, on Wednesday, June 11, 2014. (Washington Post photo by Nick Partlow)

MCALLEN, Texas – Behind the beige brick facade and the barbed wire of the Border Patrol station here, crowds of Central American women and children are sleeping on concrete floors in 90 degree heat.

The sick are separated by flimsy strands of yellow police tape from the crying babies and expectant mothers. They subsist on bologna sandwiches and tacos, with portable toilets and no showers, and their wait can last for days.

These are examples of the detention conditions, captured on a surreptitious video obtained by The Washington Post, that prompted U.S. President Barack Obama to declare a “humanitarian crisis” this week, as illegal migrants, including thousands of women and children, stream into south Texas. Every day, hundreds of Central American migrants, in groups as large as 250 people, are wading across the muddy Río Grande and turning themselves in to the Border Patrol as helicopters and machine gun-mounted speed boats patrol the river.

Fleeing gang violence and poverty, and driven in part by the belief that Central American women and children will not be deported, many of the migrants are not trying to sneak into the country but crossing in plain sight.

Recommended: For Salvadoran emigrant, a life split in two

The sharp spike over the past three months, particularly of children traveling without their parents, has overwhelmed the Border Patrol’s detention centers in South Texas, prompting authorities to ship young children to converted warehouses and military bases as far away as California. Obama has pledged $2 billion to construct temporary housing and has ordered the Federal Emergency Management Agency (FEMA) to take charge.

In the past eight months, Customs and Border Protection has detained 47,000 unaccompanied minors, most of them in the Río Grande Valley area of south Texas, up 92 percent from last year. Across the river in the drug cartel-run Mexican border town of Reynosa, migrants from Honduras, El Salvador and Guatemala sleep on bunk-beds in church-run shelters, as they prepare for the culmination of dangerous journeys by bus and train that have often taken them weeks to finish.

Fany Yaneth, a 25-year-old single mother of four, hitchhiked for three weeks. On Tuesday, she waited under a sliver of shade in a shelter courtyard with dozens of others. In her violent home town of Choluteca, Honduras, where she milled flour and shared her mother’s apartment with three families, “you can’t walk in the streets,” she said. “They’ll kill anyone.”

The next morning, she said, she would be taking her 7-year-old daughter and her 17-year-old brother and presenting herself to the Border Patrol.

“What we’re hearing is that the Americans are helping Hondurans right now. And even more for women and children. I don’t know if it’s true,” she said. “This is what I want to do. I’m going to arrive at the bridge, to walk up to American immigration and hold out my hand.”

Unlike illegal migrants from Mexico, who can be quickly processed and returned by bus to Mexican border cities, Central Americans cannot be easily shipped home. Airplanes must be chartered. Consular arrangements must be made. And if migrants request asylum in the United States, the U.S. government has the additional responsibility to determine whether their appeal is based on a legitimate need for protection and a “credible fear” of persecution in their home countries.

More than 36,000 migrants, the majority from Guatemala, El Salvador and Honduras, requested asylum along the southwest border during the government’s 2013 fiscal year, nearly triple the 2012 number. Ultimately, most of the applications were denied, but critics of the process say migrants are gaming the system to extend their stays in the United States. Others may simply go underground and ignore deportation orders if their petitions are rejected.

“I guess when you advertise $2 billion of assistance to help out the cause, it’s an open invitation for anybody to come across,” said Lazaro “Larry” Gallardo, a constable in Hidalgo County, as he stood along the Río Grande riverbank.

His deputies said they were picking up children as young as 4 without their parents and other kids with Hello Kitty backpacks, cellphones and the numbers of U.S. relatives on notecards.

The cellphone video obtained by The Washington Post shows dozens of women and children sprawled out on concrete floors. According to a person with first-hand knowledge of the facility, who provided the video, the migrants wait for days, sometimes more than a week. A makeshift quarantine for detainees with scabies is cordoned off with strands of yellow tape. Another separates those with chicken pox.

Asked about the living conditions for migrants in the Border Patrol stations, Customs and Border Protection spokesman Michael Friel said his agency is “ensuring nutritional and hygienic needs are met.” The children receive “meals regularly and have access to drinks and snacks throughout the day,” he said, adding that there is medical care and that “facilities include toilets.”

In a statement, Friel said the Border Patrol does “everything within its power” to process the children within 72 hours and transfer them to the Department of Health and Human Services, as required by law.

The video, whose contents were confirmed by Border Patrol agents, offers an up-close look at the daunting challenges facing FEMA, which has been tasked with coordinating a response to the crisis. The front of the McAllen Border Patrol station in McAllen, Texas, where Central American migrants are overwhelming the facility after crossing the Río Grande. Washington Post photo by Nick Partlow

The McAllen Border Patrol station, where the video was recorded, has received as many as 1,300 migrants per day recently, far exceeding its capacity of fewer than 500. The crowding has forced Border Patrol officials to use the secure garage area, or sally port, where passenger buses are typically unloaded, as a detention area.

In holding cells with one toilet, there are sometimes as many as 100 people, “covering every inch of floor-space,” said one agent. Border Patrol officials here declined to make the facility available to Post reporters.

The flood of new arrivals has so overwhelmed border facilities that U.S. immigration officials have been flying families to cities in Arizona, where the illegal migrants are released and instructed to return for a court appearance. Hundreds of children are being held at Lackland Air Force Base in San Antonio, as well as Naval Base Ventura County in California and Fort Sill in Oklahoma. They are also being sheltered in a converted warehouse in Nogales, Ariz. FEMA plans to repurpose another warehouse in McAllen to house the children, according to local agents.

On Monday, Róger Omar García Chávez, a 29-year-old Honduran at a shelter in Reynosa, said he had sent his wife and 2-year-old daughter across the river four days earlier and planned to sneak across himself and meet up with them in Houston.

“Women with children are going north,” he said. “What I’m sure of is that pregnant women and children are being allowed in.”

At the shelter the next day, he was gone.