Learning To Surf in Nosara Costa Rica: It may just be the world’s best place 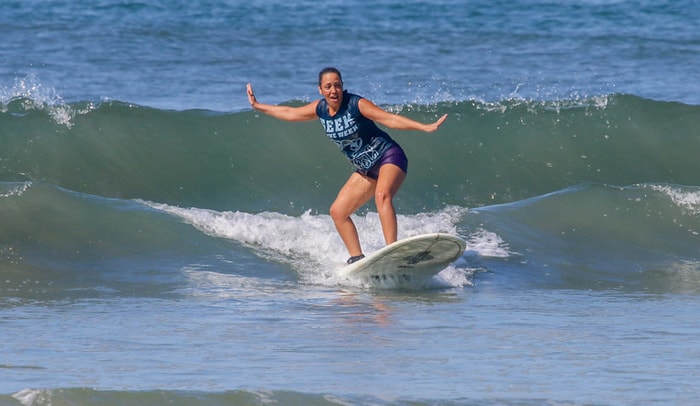 NOSARA, Guanacaste — I honestly did not think my Costa Rican girlfriend would take a surfing lesson with me, as she does not know how to swim and is afraid of deep water. Yet here she was, 49 years old, hauling a 9-foot board into the Pacific Ocean at Playa Guiones for a lesson with 20-something Kevin from Safari Surf School.

“Are you sure this thing won’t sink?” Guiselle asked, and it was a serious question — she feared the surfboard would sink when she stood up on it.

Kevin cracked up and said, “¿Cómo se te ocurre eso?” How do you even think of that?

Guiselle got washing-machined once by a wave in Flamingo, rolled over and over, and never again has she entered the ocean much deeper than her waist. She told me later she was feeling a bit fearful as she walked out into the water at Guiones, jumping over some pretty strong waves, holding onto her board.

But the beauty of Guiones is it’s very flat for a long way out, and there are no rocks, so it’s very difficult to get in trouble.

“It’s ideal for learning to surf because the waves aren’t that rough, you’re not going to get beat up,” said Steve Reyer, owner of Coconut Harry’s, which has a surf shop at the main cruce in Guiones. “There’s no rocks, and there’s a nice shallow shelf of sand.”

In this series, Tico Times Travel takes an in-depth look at some of Costa Rica’s greatest destinations, with multiple articles exploring their appeal. In February and March, we’ll be looking at all the attractions of Nosara — yoga, surfing, hotels, restaurants, real estate and more.

Luis Pardo, manager of the Olas Verdes hotel, home to the Safari Surf School, said, “It’s a beach break, so there are a lot of places where it breaks in different places, and it’s super-consistent. Possibly it’s the most consistent, maybe this one and Playa Hermosa de Jacó. So there’s no problem that you come here to take surf lessons and there’s no waves. There’s always waves.”

The jefes at Safari Surf School, Tim Marsh and Jeffrey Baltodano, had assured Guiselle that it didn’t matter if she knew how to swim. They said the shelf of sand off Guiones is so shallow that she would never venture deeper than water that comes to her chest. So here we were.

Ladies first. Kevin told Guiselle to climb onto her board, and she shrieked in laughter when she almost fell off the other side. But then she found the middle and assumed the position.

It looked like she’d been doing this for years. She rode the wave for several seconds, not doing much of anything with her body except holding it very still in the center of the board. She looked incredibly relaxed. It looked like she was confusing surfing with yoga.

“I forgot about everything and everyone,” she said, almost as if she had zoned out, and for a few moments it was just her and her board and the ocean, and the rest of the world didn’t exist. “And I let myself go.”

Then she fell in the water, of course. But here it was waist-deep, and by now she knew there was no danger.

I took a surfing lesson in Tamarindo once but I wasn’t able to stand up for more than a second. Today I was eager to erase that memory, so I mounted my board and waited on a wave.

I felt the sudden velocity as the wave caught me, and then I caught it. I just stood up, doing what Kevin had taught us to do on the beach, and I was surfing. It didn’t seem so hard anymore, and it was fun. Then of course I fell in the water, but when I looked back at Kevin he greeted me with a big thumbs up.

Guiselle’s second wave dispelled all doubt that the first was beginner’s luck. With a Zen-like calm, she stood up and rode it all the way to the beach — I told Kevin I thought she was going to ride it all the way to the car. When she was almost to the shore, some horses came trotting through the water in front of her, and she told me she jumped off the board to avoid hitting them.

Richard Jordan, the proprietor of Tica Massage and the Guiones Wellness Center, used to hang a shingle on the main street across from the Harmony saying “Surf Till Ya Die.” He retired that in favor of more signs elsewhere saying “Tica Massage,” and I have to admit that Guiselle and I were sufficiently tempted to actually go and get one of these Tica massages, and they were great.

Richard is a tall, loquacious, white-haired old surfer with two Tico kids. I asked him what was different about the surf break in Nosara, and he launched into an oceanography lesson.

“It’s a consistent wave, and it’s because it kind of sticks out there and it has a good angle. We got the big old Pacific Ocean out here, the biggest ocean on the planet, and … where we’re sitting, with a slight angle towards the south, means we get more storms from the south.”

He pointed out how big the Pacific Ocean is between Australia and the Americas. “It’s a monster, and those storms form down in the southern sea, down there by Australia, and they work their way across to South America, they just march along.”

He said another factor is that the water offshore is really deep. “If you got shallow water, it’s equivalent to Florida; they don’t get really big waves,” he said. “Wherever the big, deep canyons are at, that’s where the big waves of the world are.

“So the depth offshore determines size, and swell direction determines how much are you going to get, how much you rake in,” he said. “And this place is a rake — very consistent surf.”

Steve Reyer of Coconut Harry’s started surfing, of all places, in New York. In 2006 he was director of national account sales for Nextel in Dallas, and when Nextel was bought out by Sprint, he took a severance package and moved here.

“And it was such a great vibe,” he said. “The owner gave me the lowdown of the town, I started surfing here, the waves were great, the people were super-friendly.”

He had tried the waves all up and down the Pacific coast, but Nosara was his favorite place. “It’s not too touristy but it’s not too dead,” he said — which struck me as an excellent description of this town.

He bought Coconut Harry’s from a guy named Harry, and he never bothered to change the name, though people do call him Coconut Steve.

Coconut Harry’s is an ideally located surf shop at the main crossroads in Guiones with a popular eatery called Taco Taco, which has a sign saying “We only do tacos,” though it also serves great craft beer. This location draws in stragglers of all kinds, if only to get a taco or a drink, and then the wife ends up going in the gift shop and finding the perfect bikini while the husband is intrigued by the surf lessons.

It’s a business happening all over this town. Down the street, the Nosara Surf Shop was recently acquired by a new owner named Gary Cameron last March. It’s a big shop with retail surf attire and equipment, and it rents surfboards, SUP boards, skimboards, ATVs and golf carts. It also offers ATV tours, surf lessons and surf tours.

“Some people come down that are either intermediate or advanced, or sometimes like yesterday the swell really wasn’t here, so the waves were really small, but they’re potentially firing in Ostional or Playa Negra or another beach that’s close to here,” said store manager Ryan Williams. “So surf tours is mainly taking people that know how to surf to different locations so that they can catch some waves, because there are some other good breaks around here, they just aren’t consistent like Guiones is.”

On the same street, newcomer Olo Alaia is a pretty little surf shop that opened just two months ago (and has already sold some 32 boards). What sets it apart is that it serves gourmet coffee, craft beer and baked goods, so it’s not just a place to shop but to hang out.

He said the name of the shop comes from the two types of surfboards first crafted by the ancient Polynesians, the 16- to 18-foot olo board made from the breadfruit tree and the 6- to 8-foot alaia, made of mahogany.

In north Guiones, Juan Surfo’s Surf Shop is a Tico-owned business built by one of the first locals to take up surfing here (who was therefore dubbed Juan Surfo). Other locally owned surf shops and schools are listed below.

One of the more innovative businesses in town is Surf Simply, an all-inclusive surf schools that caters to more experienced surfers, with one-on-one training and video coaching.

“Surfing is the game of moving where your board is on the wave so that it is as close to the white water as possible, without getting stuck in the white water,” said Ru Hill, CEO of Surf Simply. “We call that the critical part of the wave, it’s where the most power is and where the most fun is too.

“Entry-level surfers often think surfing is all about standing up, and that certainly is fun, but actually surfing is about what you can get the board to do on the wave. Standing up is just one of a hundred things we do as surfers in order to press different parts of the board quickly and powerfully, so that we can get it to go where we want.”

Nosara is an ideal place to learn how to surf, and surfing lessons abound, but experienced surfers like it too. Here is an incomplete list of some of the surfing businesses I found in Nosara, in alphabetical order.

What: Surf and SUP lessons and rentals, bike rentals and local tours including waterfall, sportfishing, snorkeling and kayaking
Where: End of the road from Café de Paris in Guiones
Phone: 2682-5531
Email: cachosurfs@gmail.com
Website: http://cachossurfschool.com

What: Well-stocked surf shop, board sales and rentals, surfing lessons and Taco Taco
Where: On the main road in Guiones across from Café de Paris; board rentals and lessons in a spot next to Beach Dog Café
Phone: 2682-0574
Email: chsurfshop@gmail.com
Website: http://coconutharrys.com

What: Surf shop with apparel, board sales and rentals, surf school with lessons, and cabinas by the beach
Where: In North Guiones near the Gilded Iguana
Phone: (506) 2682-1081
Email: juansurfo@yahoo.com
Website: http://www.surfocostarica.com