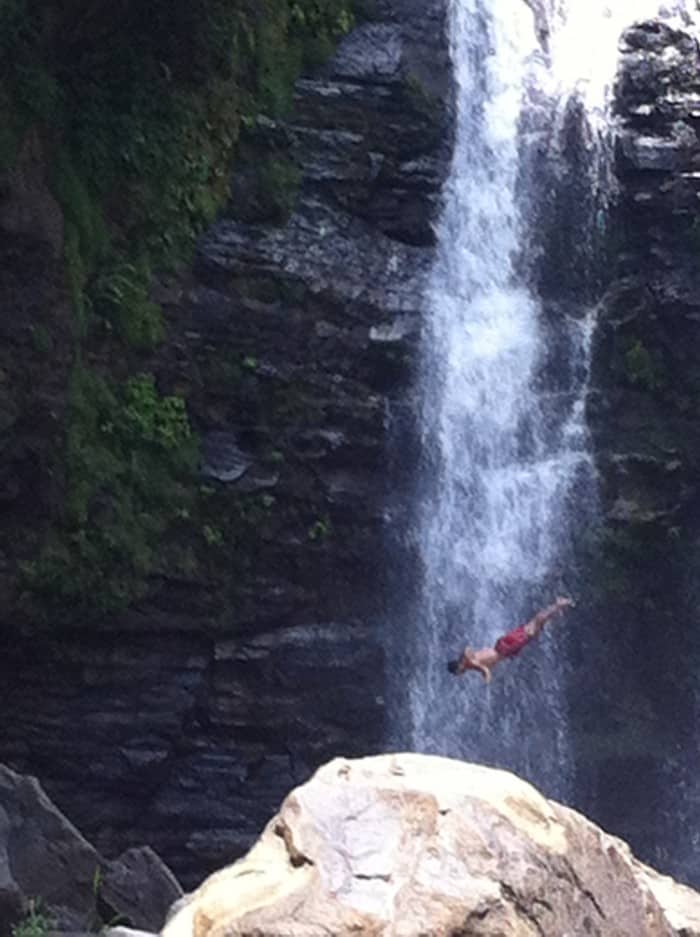 When the manager of my hotel in Dominical heard I was going on a horseback ride to Nauyaca Waterfall the next day, he said I should cancel my reservation and walk to the waterfall.

I’m so glad I did. Don Lulo’s Nauyaca horseback tours do cost $70 — but it’s a bargain, a six-hour adventure with breakfast, lunch, a horse and guides who hang ropes without which the thrilling 30-foot cliff jump would be pretty much unthinkable.

Our guides, Erick and Daniel, first asked each of us how many times we had ridden horses.

So they gave her a horse named Speedy Gonzales. One thing you can say about tour guides in this country, they have a great sense of humor.

My mare, Golosa (“glutton”), turned out to be the racehorse, taking an early lead, eager to trot and even gallop on a rocky trail cutting through dense secondary rain forest.

On the way I passed some walkers, who eyed us a bit enviously. It would be a long trail to walk, but it makes a perfect ride. Golosa delivered me safely to a house with an outdoor dining area where we ate a hearty breakfast of fruit, muffins, fried corn patties, pineapple juice and a perfect cup of coffee. There were two spectacular scarlet macaws nearby in a big cage with an open door, and the most fabulous peacock I’ve ever seen. We mounted again and rode the rest of the 4-km trail to the two-tiered waterfall, which is widely considered one of the most beautiful in Costa Rica.

The top fall is 45 meters high, spilling in a narrow shower into a smallish pool. Swimming is discouraged here because the pool is small and access is difficult, requiring you to clamber over a lot of boulders. The bottom fall is only 25 meters high, but it’s more interesting to look at, as it cascades beautifully over a broad cliff face. The pool at the base is much bigger and more accessible — a perfect swimming hole. I asked Erick, who speaks pretty good English, if anyone had ever died jumping from the top of the lower cliff.

“No, thanks God, not yet,” he said. “Sometimes crazy people came hiking and did it, but we say all the time, ‘No jumping.’ We help the people jumping, but in the middle, not on the top because it’s not safe. You have to jump really far.”

But he said the crazy people who tried it somehow survived.

I also asked him if tourists ever fall off the horses.

So what does Nauyaca mean?

“It means ‘venomous snake,’” he said. “It’s some kind of indigenous language.” He said his grandfather, Don Lulo, who founded this business and owned this land before willing it to his sons, used to listen to a radio soap opera that had an hacienda called Nauyaca, and he liked the word and named this place after it.

I swam to the other side of the cool pool and joined the people getting an almost-painful massage from the pounding water. I thought this was the end of the adventure.

Then one of our guides took a thick blue rope and started climbing up the heaviest part of the fall, quickly disappearing into the thick of the water.

“¿Qué hace ese loco?” I muttered — What is that crazy guy doing? I figured he was going to amuse the tourists by doing extremely dangerous dives from on high.

A few minutes later, Erick said, “Karl!” He was holding the rope in one hand and offering the other to me. “Don’t you want to climb the waterfall and jump?”

I grabbed the rope. He said I would be blinded by the water at first, but as soon as I got past the first part, I would be able to see.

I groped my way into the thick of the waterfall, with Erick guiding me.

“Put your left foot here!” he shouted over the roar of the water. “No, lower. There!” I had my first foothold.

“Now your right foot there, and your left foot here!” And so it went. I was completely blind in the cascading water, in fact squeezing my eyes shut in hopes of not losing my single contact lens.

But soon I reached a place where I could see again. The cliff turned out to be easily climbable — with a rope and a guide. (The people who saved their money and walked, sadly, were unable to join us for this adventure.)

Erick handed me off to Daniel, standing on the ledge above, and he urged me to go higher. I said this was far enough. So he walked me over to the edge, holding my hand like a little boy, and told me to be careful because it was slippery.

I found my footing on the edge of the cliff and surveyed the leap — perhaps 25 feet.

I let out a Tarzan yell. I jumped. I plummeted. I splashed. It was thrilling.

When my son was little he used to say, “I want to do it again!” I’ve heard the saying that you should do something you’re afraid of every day — but there’s nothing in the saying about doing it twice. Sometimes I think I’ve used up all my luck for one day.

But the newlyweds in our group, Joel and Kaitlynd Wilson of San Luis Obispo, California, both did it twice, and both climbed to the higher ledge. And they did it barefoot, while I had worn my sandals.

I shucked off the sandals and climbed again. Erick and Daniel barely coached me now, like I was an old pro at this. I climbed to the higher ledge, where the jump was about 30 feet, stared at the water below, mustered my courage and jumped again.

So since I did it twice, can I not do something I’m afraid of tomorrow?

Kaitlynd, 24, who previously jumped off a 30-foot cliff at Lake Havasu, called this spot “pretty spectacular.”

“It’s way better jumping from a waterfall,” said Joel, 26. “This is what you think of when you think of Costa Rica.”

Elisa Tobin, 43, a massage therapist from Boston, said she thought the whole day was a thrilling experience.

After about an hour at the waterfall, we mounted our horses again and rode back to the dining area, where we were served a huge lunch of stewed chicken, potatoes, rice, beans, tortillas and salad.

It was pushing 1:30 — rain o’clock — and the first drops were starting to fall as we mounted our horses for the last time. Golosa was ready to gallop, as if to beat the rain home.

I felt like a jungle cowboy, returning victorious from a gunfight with my fears.

And to think, I could have saved money and walked!

Getting there: Immediately north of Dominical on Highway 34 is a bridge over the Río Barú, and just beyond that is the turnoff to Highway 243 toward San Isidro. Take it, and after passing the little town of Barú, watch for signs for Don Lulo’s Nauyaca Waterfall, whose office is on the right side of the road. Caution: The road to the office is paved, but the road to the trailhead is unpaved and very steep. If you don’t have 4-wheel-drive, catch a ride with someone else from the office.